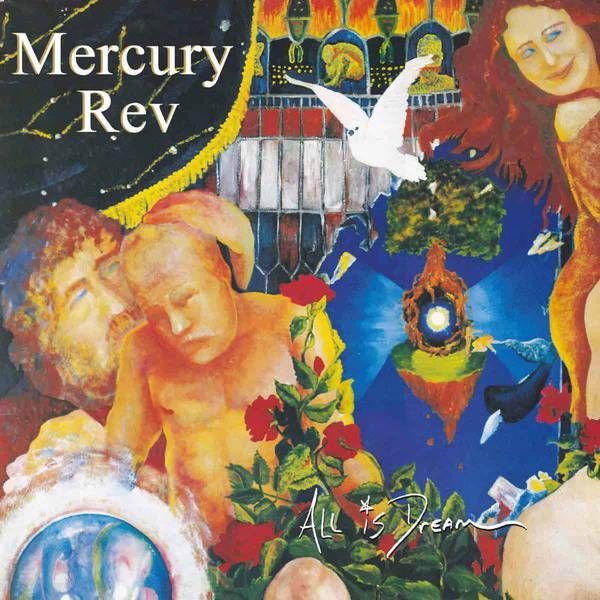 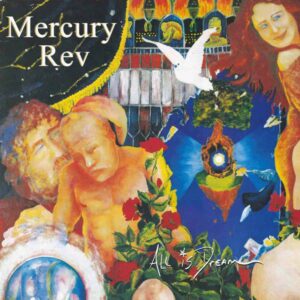 Cherry Red have always been the king of re-issues and this one is no exception. The excellent follow up to Deserters Songs is back in marbled black and red vinyl. Wayne AF Carey gives it the once over…

Mercury Rev fans will already know that Deserters Songs is a fuckin’ classic. The purists out there will always say they died when David Baker departed after Yerself Is Steam and Boces, which were a lot more raw and experimental. Check out Chasing A Bee and Carwash Hair for example. My earliest memory of the Rev were back in the early nineties. They were fuckin’ bonkers. Who throws celery sticks into the audience? Or was I just tripping at the time?… Last time I saw them live was at the debut Bluedot festival…

They performed Goddess On A Highway… I cried, as did the majority of the people around me.

Anyway, enough about me. All Is Dream is apparently hard as fuck to get hold of on vinyl nowadays, so it was a great pleasure when I heard the news of a 1,000 copies limited vinyl release. The sleeve notes give a well written account by Keith Cameron of the ups and downs before the release of Deserters Songs. I actually thought they could never follow that masterpiece until I heard this. I actually can’t decide which album is best nowadays after revisiting this platter of amazing theremin soaked beauties. The Bond Theme rush of The Dark Is Rising still sends shivers up my spine.

There are no fillers on this, it’s pure prog psych brilliance. Tides Of The Moon is haunting, as is track three chains. Lincoln’s Eyes has a magical shimmering guitar solo reminiscent of their twin band The Flaming Lips (who Fridmann has produced a shit load for and continues to put his magic touch on everything; note one of LTW’s albums of the year The Lovely Eggs – I Am Moron) I’m not going to mention every track as they’re all fuckin’ stunning. Nite And Fog and Little Rhymes sound as good as ever, classic Mercury Rev. My favourite track on the album A Drop In Time is the closest to Goddess on here, a tear jerking love song of epic proportions including my favourite line that reminds me of my favourite place in the world, “We met on a beach in Greece, and parted on a rusty Spanish stair” Fuck, get the tissues out…

Hercules is a class mellow Rev wigout which stands the test of time in every way. Streets Of Laredo was originally penned in 1924 and has been covered by many people including Johnny Cash. The Rev nail this cowboy ballad with ease. There are loads of extras on here which give you an insight of the songwriting skills of Jonathan and Grasshopper. Nocturne In C# Minor, Opus 27. No.1 is pure classical and the cover of Lucy In The Sky With Diamonds is up there with the greatest cover versions, twisting into the sound of the Rev.

Side four is a joy of extras including The Brook Room, Silver And Gold, the excellent demo of A Drop In Time, Back Into The Sun, Mr Moonlight Will Come, an excellent Cool Waves and a closing short demo of the wig out Hercules stripped bare. It’s all packaged immaculately and worth forking out for if you’re into your vinyl. A beautiful addition to any Mercury Rev fans collection.