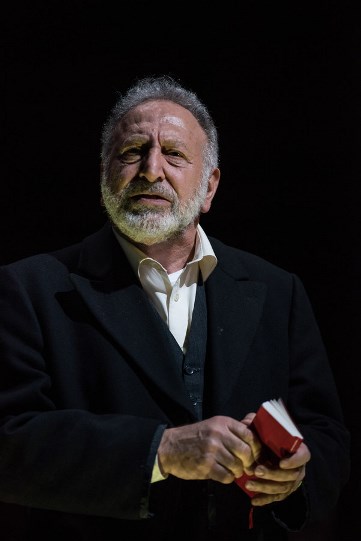 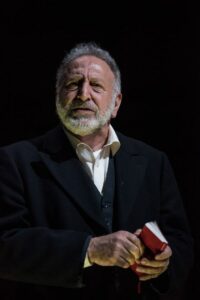 The Merchant of Venice by William Shakespeare

Polly Findlay returns to the RSC after her triumphant 2014 production of Arden of Faversham with a thought-provoking staging of The Merchant of Venice which examines the themes of racism, homosexuality and women’s independence. Contrary to what has been written elsewhere, this play is very well conceived, cast and acted and features some superb scenes and hilarious cameos.

There are few clues as to when exactly the production is set as the costumes vary from the 1960’s style dresses of Portia and Nerissa to the much more contemporary sports gear of Gratiano. The stage is bare apart from a floor to ceiling mirror backdrop at the back of the stage, which allows audience members the rare privilege of seeing themselves on stage at the RSC. The huge pendulum that swings throughout the production has attracted some comment and speculation as to its purpose. A few ideas would be the two sides of sexuality, the comic and tragic elements of the play or the time ticking away for Antonio and Shylock. Either way, it is an intriguing element and works better for me than the idea of the cast sitting on benches at the side of the stage when their character is not in a scene as this tends to limit the points of entry in the theatre that are the hallmark of many productions.

The role of Shylock is played by the eminent Palestinian-Israeli actor Makram J. Khoury who brings an impressive authenticity to the role. He presents a Shylock who is despised as a Jew in a Christian society and the audience recoil as he is regularly spat at in the face. The Anti-Semitic attitudes he faces are stark and uncomfortable to view and Khoury’s sympathetic portrayal goes some way to explaining the bloodthirsty attitude of Shylock later in the play, as he refuses all offers of money and demands his pound of flesh from Antonio.

Shylock is in the position to demand his debt from Jamie Ballard’s loved-up Antonio, having lent him three thousand ducats to give to Bassanio so he can marry Portia. However, from their on-stage kisses, and time when both are missing, it is clear that the two men are in love, a fact that Portia becomes aware of as the play develops and adds further spice to the courtroom scene. In fact, it is possible that the darker element of Bassanio’s conduct, seeking to manipulate both Antonio and Portia for his own ends could have been further developed, but Jacob Fortune-Lloyd turns in a solid performance.

There are some superb comic interludes, particularly when the three boxes of gold, silver and lead are presented dangling in front of Portia’s potential suitors. Ken Nwosu’s Morocco is first up to tease and be ultimately foiled, but Brian Protheroe’s appearance as Aragon, a suave but aging playboy, is brilliant. Tim Samuels gives and enjoyable portrayal of Gobbo as a wise-cracking southerner and his initial appearance is one of the highlights of the play, as is his tossing of a half-eaten banana into the audience.

However, Patsy Ferran is outstanding as a strikingly modern Portia, increasingly aware of the nature of Bassanio’s relationship with Antonio, she nevertheless dominates the courtroom scene disguised as a lawyer who ultimately saves the life of Antonio. Ferran works very well with Nadia Albina’s Nerissa and the pair’s body language brings added depth to scenes.

Ultimately, the fate of Shylock in the court, when he is forced to convert to Christianity is indicative of the discrimination that is a central theme and provides gripping theatre in this production. It also leads to the conclusion where the bare stage is adorned for the only time by a wealth of candles which provides a striking visual image to round off the evening. Ultimately we are left to ponder the timeless themes of racism, love and betrayal and even the fair application of law and, as so often, Shakespeare poses more questions than he ever answers.

Photo: Makram J. Khoury as Shylock,  by Hugo Gendinning and courtesy of RSC

Further info on the play can be found at the following page: rsc.org.uk.