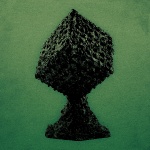 Merchandise: After The End (4 AD records)
CD/DL
Out Now

For so long Merchandise resisted the marketing departments of record companies and have let myth define them. Information on them is sparse – they still don’t have a Wikipedia page and their website is a pretentious, encrypted joke amid the hype.

A few internet videos by their beloved fans were all that existed to visually satisfy their devotees as they gave away their music for free, barely announcing its release and proving elusive interviewees. Their emergence has always seemed to hark back to the days when loved up fans would wait to see what their favourite bands were doing via the music print weeklies and instant gratification was a futuristic pipe dream.

The myth of Merchandise is no more, though.

This is a seismic shift from the underground to the indie pop bandstands for the Florida’s finest purveyors of melancholy pop. It’s a statement of their desire to operate on a higher plateau and no longer can they afford to release half finished recordings. They have a responsibility now to become the biggest alternative band in the world – but only if they fully commit – and as yet their intent comes across as being tinged with reluctance.

The pseudo 60s pop riff of Enemy signals the most triumphant moment of their existence thus far before Little Killer rams home the message. Telephone injects a bit of glam rock swagger and Green Lady borrows from New Order, the Pet Shop Boys and The Cure but that doesn’t mean that the furrows into mazes of psychedelic noise that marked their early work have become a thing of the past.

Exile And Ego is a ballad for the modern generation and Carson Cox is more like James Dean than Morrissey could ever be. However, there is substance behind the sex appeal despite the occasional moon in june lyric.

After The End will not be held in the same regard as some of the indie-pop classics that it is trying to pay homage to as it is two tracks shy of being a great album. Listen a little closer though and it does signpost the band’s new willingness reveal themselves for what they really are – makers of brilliantly formed angst ridden, restless, gorgeous indie-pop.