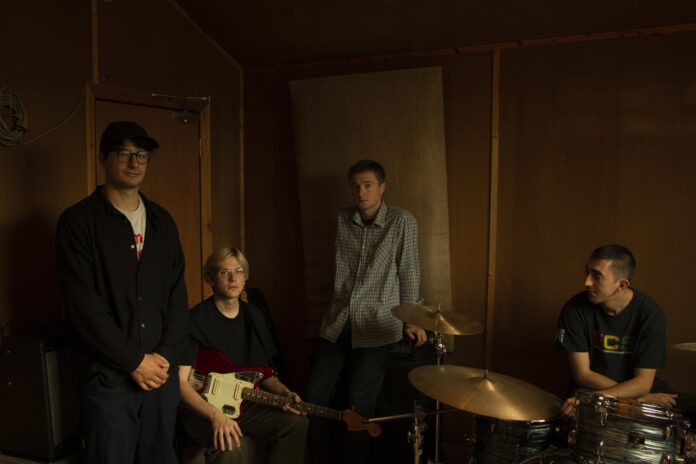 Mental health has been a key issue over the course of the pandemic, especially for musicians. In a powerful and poignant confessional, the front man of deathcrash opens up about his struggles.

Most of us have found solace in music to get through dark times. Many musicians themselves have gone through tough times to make it. Music as therapy has almost become a cliché. As they release their first full-length album Return to rave reviews, Tiernan Banks of London slowcore band deathcrash speaks out about his personal struggle behind the songs.

It’s an intensely intimate and courageous confessional – one involving drink, drugs, depression, desperation, despair and death. It brings another layer of emotion to what is already a hugely powerful record. Many readers will relate to Tiernan’s story. If any are affected or triggered by what he has to say, there are links at the end.

“With our debut album, Return, coming out, I have felt moved to say something about it. I suppose it felt odd to me to have released two records now that are so steeped in very heavy subject matter, sadness, frailty and hope, without making some reference to the context out of which they were born and reared.

It’s been a long project as a band, and each of us are such close friends. This doesn’t speak for everyone else in the band, we all have our own personal relation to the album and I feel it is important to preserve that. This is just my own account. For me, our music and our last two records have been deeply connected to my struggles and confusion with mental health over the past few years.

Playing music and writing songs is a complicated space where our emotions and identity get played out, containing and affecting both the good and sad parts of ourselves. Writing songs and developing the band has been a bit of an obsession for me, the focus of all my daydreaming, and has been a distraction from much of the pain of those years. However, it’s also from that pain that the project and my songwriting has been given life, growing out of it and feeding it too, in something of a vicious cycle.

The very beginnings of deathcrash started in late 2016 when Patrick (bassist) and I first recorded a song together in his bedroom at university, and it took form under the name deathcrash in 2018, the summer we moved back to London. By that time we had a band with a slightly changing lineup. What had initially been a private escape with Pat years ago slowly became a bigger and more concrete thing.

For a long time I’ve felt this depression and an instinct to turn away from life that I now realise had lain dormant within me forever. It was kickstarted once I left school, and became unbearable around 2019/2020. The depression I felt then was an amalgamation of some very real life wounds and very unreal mental ones that collided within me and took away my fight and drive. And whatever means I used to cope with these events or block out their significance in my mind began to fail to work and to cause me active harm as time went on.

In 2016 my uncle took his own life when was 21, the shock and confusion of which affected me much more than I understood at the time. I had never known him well. He had a mental illness and wasn’t much involved in family life. So he had a shadowy existence in my mind, which I think allowed me to identify with his situation and worry that I felt the same as him, as I had no reality with which to fact-check this. With no comparison actually available to me, I could make him into whatever I wished, and my imagined version of him became a hugely significant part of my self-image.

In 2017 my mum managed to leave an abusive marriage that had caused her and our family much suffering over the years, both in the duration of the marriage and its aftermath. It had drastically affected her sense of self and had a big impact on me.

In the two years that followed, one of the others in the band was battling with a drug addiction. It affected me greatly as I felt in some way responsible for them, and at the time I identified with what they were going through. Having taken drugs with them frequently, I’d felt very guilty for having managed to escape being branded as the addict. I think I attempted to help the parts of them that I knew were in myself but couldn’t yet openly acknowledge. At the heart of it we were going through similar feelings just with different presentations of them.

In a bid to find a purpose after university, and because I was too scared to leave behind the comfort it offered, I enrolled in an MA. But really I just spent a huge amount of time in bed. Most of it I can’t really remember – I had no motivation and rarely engaged in it. I was overwhelmed with darkness and fatigue. I took drugs often, mainly codeine, as it made the daytimes feel safer and warmer and more secluded. And most evenings I would stay up very late alone, with drink or drugs, listening to music and writing songs. At my lowest I would self-harm. I think I enjoyed this cycle of late nights and the tiredness that came with it, as it dulled my senses and helped to block out the terrifying fear I carried with me but didn’t want to admit. I think more terrifying still was the anger I held inside that I could never allow myself to express outwardly and so turned it on myself.

I couldn’t see myself from a caring or outside perspective. I just felt that I had a detestable lifestyle and berated myself for it – so all these behaviours felt both like a part of my identity and also acted as a form of self-punishment for that very identity. I was very protective of this time in my life, though, and didn’t much want it to change. So it was mostly a secret life, hidden from flatmates, partner and family. Those that I was closest to were fundamental to it eventually changing and I feel deeply grateful towards them for this.

This was the general time in which most of our album Return and EP People Thought My Windows Were Stars were conceived, written and developed. Both felt very deeply intertwined with my emotional landscape at the time.

During this period, I spent much time alone. I overly identified with musicians that had died or wrote sad and mournful songs. I overly identified with my uncle, and my mum, and the parts of my friends that were struggling. Desperate not to put myself at the centre of our songs, as I refused to access my own needs, I looked towards those I cared about for inspiration. I felt genuinely aggrieved that the stories and emotions of non-artists were not being told and yet that these were the stories and emotions that had real depth and most needed to be depicted. I still feel this way, but I realise now I was looking into them in order to see myself.

This article isn’t really about the importance of not keeping things secret or about how important it is to talk about our struggles (of course it is, and I couldn’t agree more). But this is more a serious recognition of just how hard it can be to share these feelings when you’re in them. I managed to help write two records of songs about depression, suicidal feelings, dependencies with drugs, self-harm and sang about it in public before I was ever able to admit that I myself felt these things, or to admit it to those I loved, and to ask for help. I’m still not sure I’ve ever truly managed directly to ask for help, more just gently gesture at it occasionally and silently, and then get bizarrely surprised when others don’t notice, or self-conscious when they do.

So I’m not convinced that music and songwriting has always come from a healthy place for me, and I’ve struggled with that a lot during our time as a band. Music is meant to be this beautiful creative productive thing, but it’s not always clear that that’s been the case for me. The simple notion that the act of making music and songs is inherently a creative and optimistic act has rarely felt much comfort. Though I definitely feel those positives when we play together as a four, I feel it less in times when I’ve been writing alone in my room, obsessing over songs that attempt to make sense of, or perhaps at times drag me further into, despair that I had been feeling. At times it felt soothing, but more often it was another self-sabotaging use of medication that was disabling me from living in the real world.

I’ve tried my best to keep the narratives of our songs fairly open. I hope there’s something of themselves that people can find in the songs. I believe to some extent that’s why the others have trusted me in this process. But it’s important to us as a band that, whilst the lyrics help to mould the context of the music and shape the narrative, they are not the narrative entirely.

I’ve really no idea what mechanism it is that leads to these feelings manifesting themselves in music, lyrics, song structures. And stranger still is the compulsion of ours to keep them with us for months and years, hone them, record them, painstakingly mix them, and eventually release them. I don’t know if it’s worth questioning. But I’m immensely pleased that we’ve got something positive and real to show for those times in my life when I often felt I had nothing to show at all.

I’ve been receiving psychotherapy for the last two and half years, which has slowly and very noticeably changed my understanding of myself and improved my mental wellbeing. So I’m cautiously doing much better now, though it’s certainly not because of this album. Despite what I might have thought at various points, music was not therapy for me, not when I was at my lowest at least. But I’m immensely proud that, in spite of everything, we were able to complete the record, and to a standard we are pleased with. It’s not a perfect album, but it was the best that we as a group could have achieved at that point in our lives, and that’s all we could have asked for really.”

* If anyone is affected by the issues raised in Tiernan’s story, round-the-clock support is available at MIND and Music Minds Matter.

deathcrash are currently on tour:

Interview by Tim Cooper, you can find his archive here