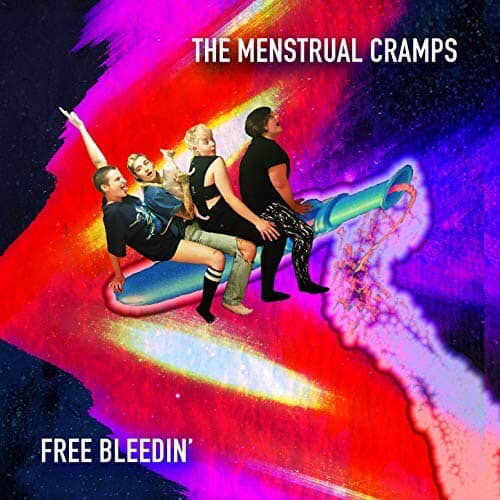 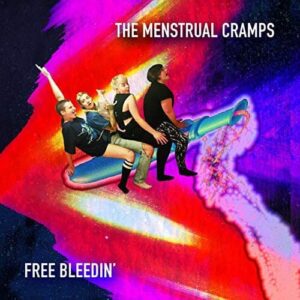 If the Spice Girls had lived in a squat with Millie Tant, Auntie Fascist and her feminista sistas, and listened to Vice Squad and early Fuzzbox demo’s…  they would still be nowhere near as good as the Menstrual Cramps.  Says Ged Babey.

Pleased to see the CD packaged in recycled, marker-penned (Boycott) Amazon cardboard… when the first song calls for everyone to Boycott Starbucks, Amazon, the Sun, Harrods, L’Oreal, BP and Shell…or as the MC’s say Boycott the Lot!

I fuckin’ love the Menstrual Cramps – arguably and bizarrely the missing link between Crass and the Spice Girls if they’d read the SCUM Manifesto instead of OK Magazine.

For some reason I really did think they were an all-women Tribute to the Cramps.  They are most decidedly Not.

Nor are they the UK’s equivalent to Pussy Riot – that is a bit of an exaggerated claim someone made on their behalf –  they need to do some serious time in jail before they are. (Given time, they may well prove to be as ‘important’ as Bikini Kill…)

They are: one of the most fun & filthy freedom-fighting feminist punk bands in the country. “Lefty Lezzers” on the Rag and Off the Bone.   Radical Feminists who get their Tits Out for their own amusement rather than for ‘the Lads’.

They won last years Hercury Prize ( great pun) and have fought pitched-battles with fascist-trolls online.  This is their second album.

Musically it uses the same template We’ve Got A Fuzzbox and We’re Gonna Use It had borrowed from Riot City records in 1981 but never gave back. They are also the spiritual daughters of the legendary Period Pains and I wouldn’t be surprised if one of their Granma’s was in the Sick Things.   But it’s not about the music per se.  Here is how the band describe themselves and their ethos;

Formed in a broken bedroom in Bristol, on the verge of homelessness, and rife with anger, The Menstrual Cramps were born. Politics on the brain and injustices surrounding them, they jumped ship to a dive in London and recorded their debut album ‘We’re Not Ovaryacting’ on distorted acoustic guitars, calling on the world to ‘Save the Badgers’, and ‘Cull the Tories’. Their debut music video for ‘My Bush Ain’t Ur Business’ was removed from YouTube after some trolls reared their ugly heads and didn’t want women to reclaim their own breasts or bodies. This summer they are back with their new album, Free Bleedin, which features revolution demanding song ‘The Smash’, grrrl power anthem ‘No Means No’, and ‘Idols’ which approaches the art world’s problem with abusers, demanding us to stop idolising our idols and to instead ‘Scrutinize Their Trivial Lives’. With their mission to ‘Make Girls Feel Good’, empower all womxn and end inequality and injustices across the world, The Menstrual Cramps aren’t here to take your shit.

I Like That Top is a wonderfully droll takedown of Top Shop girls with a sped-up Au Pairs feel.

Idols starts with the line Kate Bush is a Tory and is a litany of abuse by pop and movie legends where Lennon and Bowie rub shoulders with Weinstein and Woody Allen – with Honey Bane-style enunciation and a D-beat.

Tinder Girl is a piece of ‘perfect pop’ punk,  Teenage Kicks style -the hit song which Kenickie never had.  I could listen to this song on a loop for 24 hours. ( that’s how sad I am).

Killin Us incorporates the vocal style of the Clapping Song and a grunge feel, proving the Menstruals aren’t one trick ponies musicwise.

Tory Scum is fast twelve-bar blues with a sublime vocal with fucks a-plenty.

No Means No  and Boyz Will Be Boyz are the standouts in terms of gender politics -the former sounding like the Mob the latter the Ramones, but lyrically they spell it out in no uncertain terms. No MEANS No and  Boys WILL be Boys until they Do Something About It – and take responsibility.

The Menstrual Cramps target audience should be every disaffected 14 -19 year old girl in the UK, not old punks like me.  But they’ve got to compete with Cardi B, Nicki Minaj and Arianna Grande….

Buy a copy for your grand-daughter, niece, god-daughter… when they start to ‘rebel’, it will give them some ‘focus’ and some laughs  ( I’m talking to my usual readership of 50-something punk-fans…)  and burn a copy off for yourself as it’s just great to hear youngsters carrying on the true tradition of punk rock – to say what needs to be said, and to say it loud and proud and unapologetically, whilst having a lot of fun.

Get a copy of the CD at gigs or via Facebook

The album is on all digital platforms including Spotty, below.