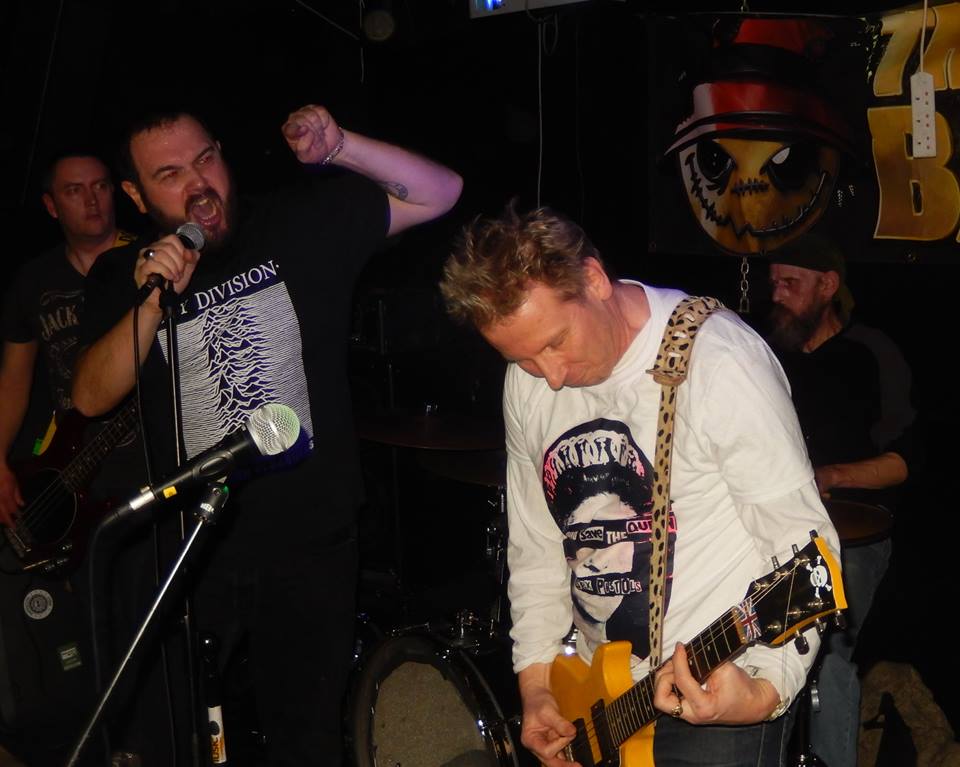 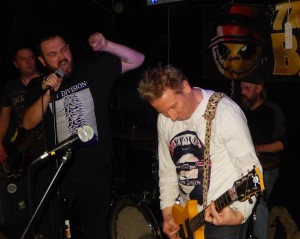 The second from last night “EVER” at the punk rock capital of the south was headlined by Menace –  and it rocked, says Ged Babey.

It all started by accident. The ill-fated Punk By The Sea fiasco meant a load of punks had nowhere to go or play until the Milton Arms stepped in and over time became Punk Rock South Central. But it’s coming to an end after some stupendous gigs by the likes of ATV, Pussycat and the Dirty Johnsons and young bands like Bullybones and Shooting Fish (and that’s just the ones I’ve seen, I missed loads of classic, drunken nights) … a cast of thousands. It will be missed… so, the second from last meant everyone was determined to make the most of it. 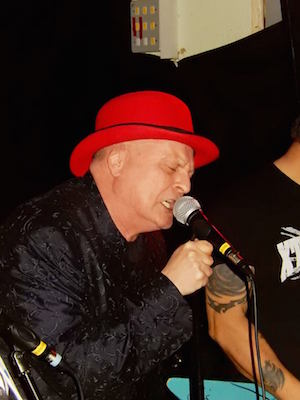 A late addition to the bill were original 77 nutters Xtraverts from High Wycombe. Resplendant in frock coat and red bowler, the lead singer was a real genuine character. Their sound and songs hadn’t changed one iota since 1977. They are classic ‘Dustbin Punk’ in that they sound like a Vortex band going for a Pistols sound with every cliché in the book covered. Hate. Police. State. Boredom. They were brilliant. A museum piece, yeah, but still full of hate and bile. Still not giving a proverbial flying fuck.

“He looks like Colonel Kurtz” I overhead someone say à propos Nigel the singer. Well, Xtraverts were a Punk Rock Apocalypse Now! As well as then.

The poor Morgellons didn’t stand a chance having to follow both The Xtraverts and The Flying Alexanders, who were on the best form I’ve ever seen. And I have seen them a hundred times over the past twenty years.

Now bearded and with drummer Pete and guitarist Perry doing other bands as well (Radioactive Bones and Lawless Son and Johnny Boxcars respectively) – they don’t even rehearse any more, they can play this set in their sleep. On a cramped stage playing an away fixture, the Alexanders play faster and tighter, with Perry squeezing out sparks of Thunders style guitar. Big Jon doing his best impression of Danny Dyer playing Blutto decided to forgo his usual showmanship and just sing his heart out whilst the band came on like a force ten hurricane. Quality Time and Soul Train are classics that should be on jukeboxes all over the country, national anthems that piss all over Some Might Say and Song 2.

The deep-seated rivalry between Southampton and Portsmouth football fans has always been a source of some tension between music fans & bands from the cities, but as Jon said “It aint where you’re from, it’s where you’re at…” and the fact that they went down a storm proved it. Unlike sport, rock ‘n’ roll isn’t a competition. Everyone Wins.

The unity between the rival cities was sealed when Bill from Night of Treason (OK from Gosport rather than Portsmouth) joined the Alexanders for a terrific version of Search And Destroy, where the Jams were indeed, kicked out!

There are probably bands like the Alexanders in every city in the UK. Contenders who should’ve had that lucky break but instead of moving to London (or Manchester) stayed in their home cities and raised families and kept their day jobs. But at weekends they become rock ‘n’ roll mainstays of the local scene and small homegrown festivals like the legendary Gabefest.

The previous Barn gig I went to (and didn’t review for various reasons) included a memorable performance by Archive 45, in a way Pompeys answer to the Alexanders. Well-dressed old punks who love their punk rock ‘n’ roll and blast out a Clash / Heartbreakers amalgam that is irresistible, timeless and the best thing you’ve ever heard after your third pint.  Together with a load of other Portsmouth bands (plus Pussycat, Menace and Xtraverts) they play the Undercover Festival this year. 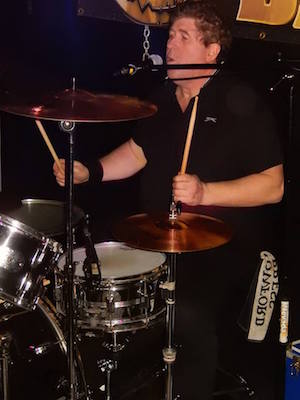 The Morgellons have a fair few fans, seem to get some prime supports slots, and have friends at Vive Le Rock. But as my mother said… “If you can’t say anything nice, best say nothing at all.”

Menace, 38 years on, are down to one original member, Noel Martin on drums, now in his 60th year and which, on paper, doesn’t sound a good prospect, but it matters not a jot when it’s cranked up really loud and in your face. Like the blues and jazz, punk has become a musical format in which one can express oneself and lose yourself  and can mean everything and nothing and the authenticity is not down to how many original members are in the line-up but whether or not they seem to mean-it-man and whether the audience accept-it-as-genuine and feel-it.

Tonight it is a nostalgia led “yep”, but is rip-snorting, power-chording, punk-rock energising rock ‘n’ roll in the present tense, fuck-it-all, here-and-now and meant; they were great. Not  just the beer talking, using me as its mouthpiece, as per usual, everyone agreed. Menace had to do SIX songs as encores before the audience would let them leave the so-called stage at the Barn.

The latest line up of Menace carry the torch and play the Menace canon with pride and skill and it blazes. The new songs are OK and don’t outstay their welcome and if we’re honest they’re just a  blur, whilst you’r waiting for the classic oldies to appear. Last Years Youth?  Yeah, but still Screwed Up, Civilised and full of shit, shit, shit-shit-shiiit! Alright, maybe it is the beer talking, but that was still a great night!

The Last Night at the Barn (probably … there is still a chance a last minute buyer will appear…) is this FRIDAY 20th Feb  ( NOT the usual Saturday) and the bands are Pussycat and the Dirty Johnsons, Mid-Age Rampage, Shooting Fish, Second-Hand Citizens and Pinky & Jonny L – Facebook event page.

The Flying Alexanders are on Bandcamp and have a Facebook Group you can join.

Xtraverts can be found online here: subcultz.com and they’re on Facebook.

All words Ged Babey. Photos Andy Matthews. More writing by Ged on Louder Than War can be found at his author’s archive.