Home Music Reviews Album Reviews The Men That Will Not Be Blamed For Nothing: Not Your Typical... 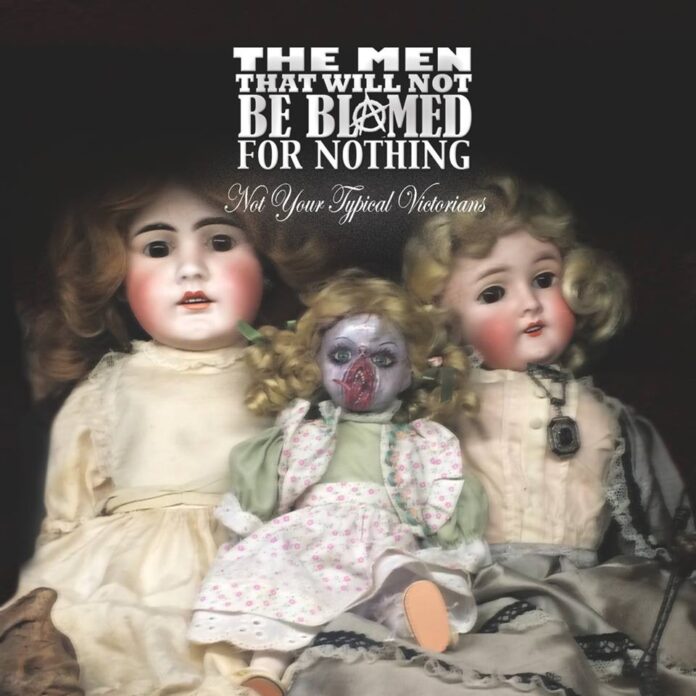 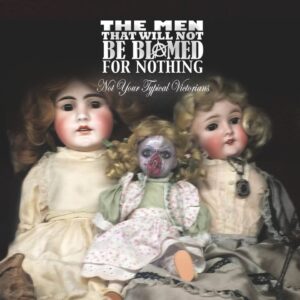 ‘We live in strange times’, as John Robb might say, when the best new punk band in the UK are a bunch of time-travelling  atypical Victorians who combine black comedy, social commentary and raging, gothic punk rock.  They have been around for years and this is their third album, where it all comes together to make up their first genuine masterpiece.

They are self-confessed, unashamed ‘Steam-Punks’ but don’t let that prejudice your opinion before you’ve heard them. They are the band who take the piss out of the whole aesthetic, whilst being fully immersed in it.  They want to celebrate the misfits, subversives and rebels of the Victorian era and mock the established ideas of the times whilst comparing them with nowadays.. . ‘I’d happily blow up the Queen’ is rhymed with ‘I’m not even that keen on Steam’ encapsulating their love/pisstake relationship with the Brass Goggles Brigade.

Steampunk is far too wide-ranging an aesthetic to explain briefly so check Wiki if you need to, here.  The emphasis with The Men… though  is definitely, defiantly on the punk side of things.

At their heaviest, rockwise, they don’t sound like Motorhead as Vive Le Rock would have you believe but  Anarcho-punk titans Conflict.

At their most punningly humorous they are like a Dickensian Carter the Unstoppable Sex Machine, combining crap puns with emotional rollercoasters of songs.

Then, there are moments of pure emo-downstroke thrash’n’death metal influences followed by jazz-punk interludes like the brilliant ‘Gin Song’ and a great sixties-style pop song in ‘I’m In love With Marie Lloyd’.

The momentum of the title track reminds me of the Electro Hippies ‘Sheep’ and is a jubilant ramalama manifesto with two or three Men on bellowing call and response.

‘A Clean Sweep’ is a chilling ‘Horrible Histories’ tale of chim-Chimney Sweep abuse even if it is based on a pun so corny that Jim-Bob and Fruitbat would’ve rejected it. ‘How I became An Orphan’ is in a similar mould with pitch-black humour and pathos ending in full-on screamo-delica.

‘This House is Not Haunted’ is based on an interesting proposition; that if you are a staunch athiest how can you possibly believe in the supernatural?  Even when you find yourself in a haunted house!   “Convincing myself everything is alright. No God, No Ghosts, No Afterlife”. It’s an epic slow-building song which starts gently and folky, but becomes a full on monster with feedback, massive choruses and percussion by Jacob Marley.

Only ‘The Worst Sideshow Ever’ doesn’t quite work in that its Comic-Book Guy performs the Carny lyrics, although funny, don’t bear repeated listenings, and the Doom Metal Dirge pace means the album appears to run out of (Ha!) Steam.

‘Vive Le Difference Engine’ again is like those brilliant kids ‘Horrible Histories’ stories and educates us to how the first computer was housed ‘lurking in a Limehouse back-street shed’.

‘Turned Out Nice Again’, ‘Inheritors Powder’, ‘Third Class Coffin’ and ‘Miner’  are at the hardcore punk heart of the album and achieve the impossible in that they are just such good grindcore, goth-thrash, punk rock tunes that the so-called ‘novelty aspect’ of the Blamed-For-Nothing crew is all-but forgotten.

Eventually it came to me, that the band are the first since Alberto Y Los Trios Paranoias to be able to do ‘comedy’/humour and great arse-kicking music at the same time. Novelty punk where the novelty never seems to wear off perhaps?

The ‘Dr Who’ like time-slip that necessitates the very existence of the Men, means of course that you do have to suspend disbelief in the way any sci-fan does –  but once you do, they are endlessly fascinating and funny  ( there’s a whole pamphlet of liner notes with lots of info about the songs, production and ideas).

Or, you can just dig the roaring songs and turbo-charged tunes, energy and fun packed into the music.  John Robb saw them at Glastonbury and sent back this report.

The Men That Will Be Blamed For Nothing have a history of their own, Andy Heintz was singer previously with Goth-Greebo-Metal outsiders Creaming Jesus and underwent treatment for cancer during the making of this album. The trauma and rage of surviving that must have had an effect on his determination to make this album the beautiful monster that it is.

He didn’t let it bog-down the album with too much seriousness and navel-contemplation though; he still stalks Marie Lloyd and threatens to drown puppies as well as setting light to child-sweeps stuck up chimney-flue’s.

‘The Miners Song’ and ‘Third Class Coffin’ are vehemently political protest songs though, despite referring to a Bygone era that the Tories seem determined to bring back.

This really is a one-of-a-kind album, a bizarre conundrum which on-paper just shouldn’t work.  I took a bit of convincing before checking out the band at all;  ‘Steampunk’ and Novelty’ flashing up like great big neon warning signs …. but as someone once said.  Listen Without Prejudice.

Not Your Typical Victorians?  Not your typical kick-ass Punk Rock band either but … judging by this album, one of the most interesting and fun bands in the country. I can’t wait to see them live.

Tour Dates are as follows;