Home Music Reviews Album Reviews The Men That Will Not Be Blamed For Nothing: Double Negative –... 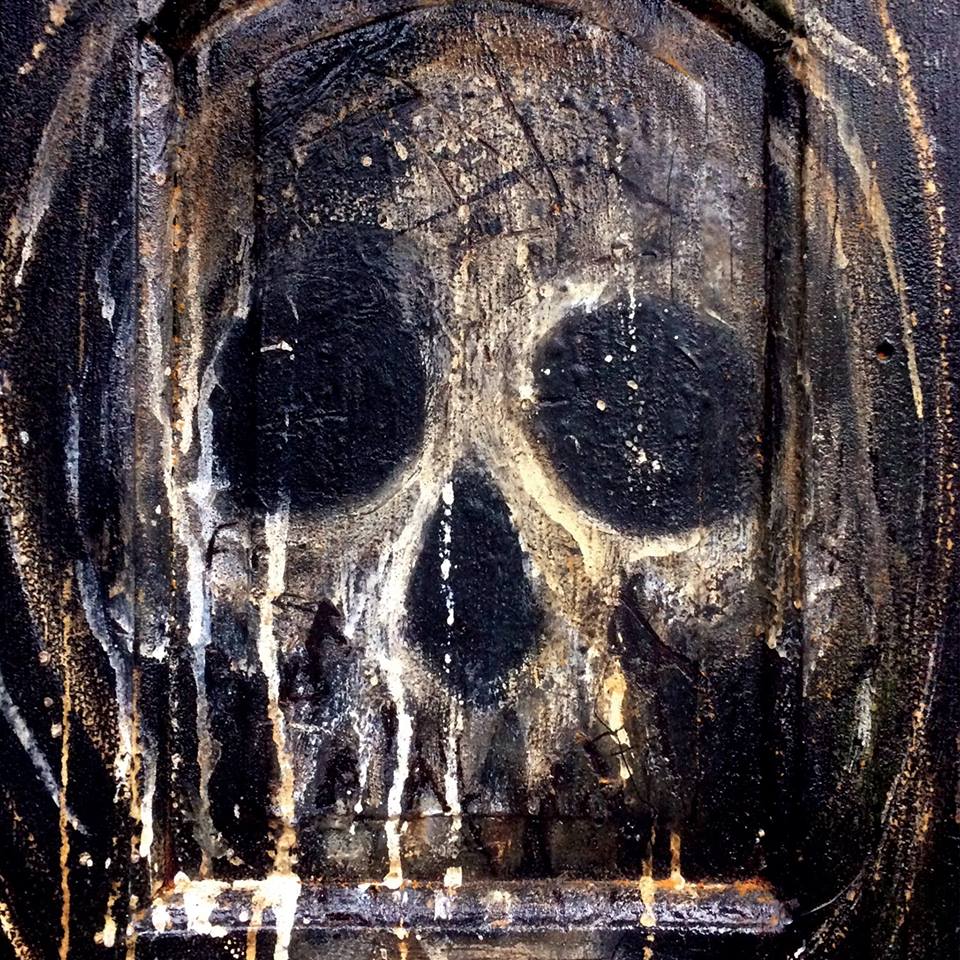 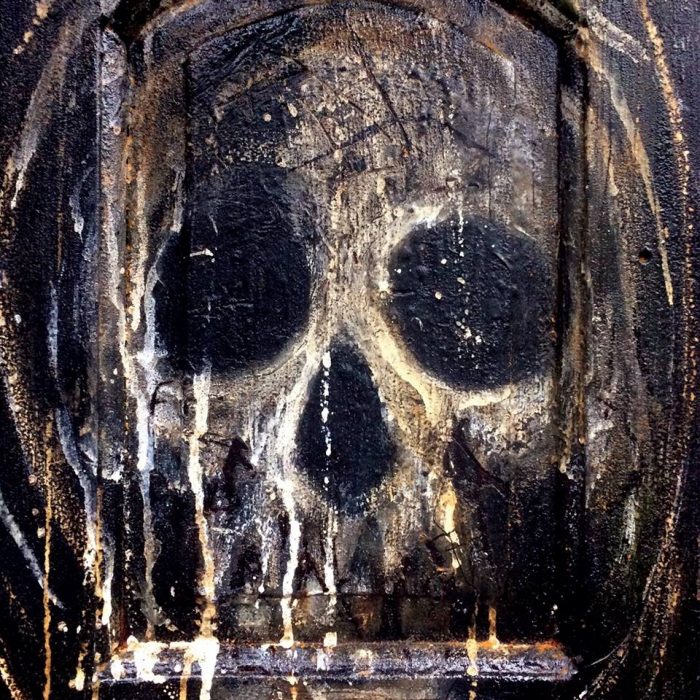 The Men That Will Not Be Blamed For Nothing

Forget ‘Steampunk’… this is a real Horrorpunk Horrorshow!  Brutal, blacker than black historical humour for sick metalheads and history nerd gorehounds. The Men have made their Death-Rock punk album and Ged Babey is scared  witless as he listens to the Blameless Ones fourth long-player.

There is death or mutilation is nearly all of these songs.

Body-snatching, dissection, disease, decay, human sacrifice, murder, dismemberment, gluttony, lust and the poverty and desperation which lead to bloody revolution are the subjects of these punk rock nursery rhymes from Hell – and all the tales are culled from the History of the Victorian Era in the Great British Isles.

The Men… are back! Leaner, meaner and covered in blood. Real Horrorshow. More Horrorpunk than Steampunk.  More splatter-movie than Hammer Horror.  X-Rated Horrible Histories for Death-Metal and Cadavercore Hounds…. if y’get my drift.  It’s a dark, brutal album and one which should win them a lot more admirers outside the Steampunk community.

They remain The Only Steampunk Band That Matters… in that they should appeal to punks, goths, politico’s, metalheads, drinkers, thinkers, nutters, nerds, anyone and everyone who likes a bit of content as well as window-dressing, (black) humour as well as deathly seriousness.

“We wanted to create a short, angry album that emphasised our punk side and pushed our sound forward.  It’s dark, savage, brutal and holds up the rotten corpse of Britain’s past as a mirror to the sorry state of the present…and then rubs yer face in it so you won’t do it again. The humour is still there, but it’s dark and twisted- there’s very little of the Music Hall influence we’ve touched on before. This is the first of a pair of albums, the next one will be expansive and elaborate, where this one is intentionally taut and abrasive.”

Musically they have sped-up and cut-out any flab: Nine songs in twenty-nine minutes so not a second wasted.  The mixture of anarcho-style punk and gothic and thrash metal is more streamlined and cohesive somehow… and there is no other band which does this kind of  thing.  Music / lyrics /history / humour;  a whole aesthetic.  The lyrics are vital. Singer Andy Heintz gave me a track by track rundown with a bit of the historical background;

A song about basic economics as illustrated by Burke & Hare in 1828 when they identified a business opportunity to supply goods to Professor Knox to use in his anatomy lectures.

Another song about a novel business plan. Amelia Dyer(1837-1896), the Baby Farmer, went into partnership with River god Father Thames. She would feed him the souls of babies and in exchange he would hide their bodies and she could pocket the fee she was given to raise them.  Over a twenty year period she was thought to have killed up to 400 babies.

Hidden (In The Club)

A Hammer Horror/Hellfire Club/Folk Horror cautionary tale about the dangers of greed and curiosity and magick.

The Soho cholera epidemic of 1854 killed hundreds in a matter of weeks. The prevailing theory was that it was airborne and spread through the miasma.  John Snow’s painstaking analysts of death patterns helped prove it was waterborne. ‘They’ve taken the handle off the Broad Street water pump. John Snow knows what’s going on.”

Given the band’s name, it was inevitable we would tackle the subject of Jack The Ripper at some point. In 1888 five women were savagely and brutally murdered. This song is about the people who make money by writing ludicrous conspiracy theories about the murders.

God Is in The Bottom Line

A song about capitalism, greed, child labour and health and safety in cotton mills… all the fun stuff. It was written about the industrial revolution in Britain but can equally apply to sweat shops making clothes for Primark today.

A song about Queen Victoria’s son, Bertie.  He had enormous appetites for food, drink and sex. He had a special chair made for him in a French brothel to hold his bulk comfortably whist he had sex with two prostitutes at a time. This song is about the establishment rallying round to cover up his behaviour and maintain the lucrative status quo.

A love poem to scientific pioneer Marie Curie, a woman who lit up any room she entered.

There’s Going To Be A Revolution

This song is a call to arms from a person at the end of their tether. It applies as much today as it did in Victorian times. Nothing has changed.

The title Double Negative comes from the fact the band are bored with clever-dick pedants informing them the bands name is grammatically fucked..  The working title was ‘Yes, we do realize its a double-negative you cu…’ but they were probably wise to shorten it.

There is no stand-out track and certainly no filler.  Obscene Fucking Machine is an initial favourite because its a fascinating subject – which I knew nothing about -and flies in the face of  supposed Victorian morality. If you google an image of the chair you can have minutes of fun working out how exactly he used it -and how he could possibly have sex with two prostitutes at a time!

There She Glows is a tragic, macabre love song to Marie Curie -first female winner of two Nobel Prizes -mocked by her envious male contemporaries, because she suffered radiation poisoning due to her research, ‘Can you cure yourself Curie? No you can’t…’  Heintz vocal performance is stunning.

There’s Going To Be A Revolution is a one-chord grindcore monster where the reflection of the past and a snapshot of the present align.

Supply & Demand and God Is In The Bottom Line show the Men can do straight-forward Motorhead style punk and hardcore respectively whilst Disease Control and Hidden feature some great guitar-sounds and inventive playing from O’Neil. The rhythm section are a disciplined unit throughout.  There is no way the bands detractors can dismiss them as a novelty any longer.

.Double Negative sees the Men That Will Not Be Blamed For Nothing making a thoroughly kick-ass rock album. Short, sharp, shocking and still retaining their uniqueness and wickedly dark sense of humour borne out of confronting the horrors of the past. 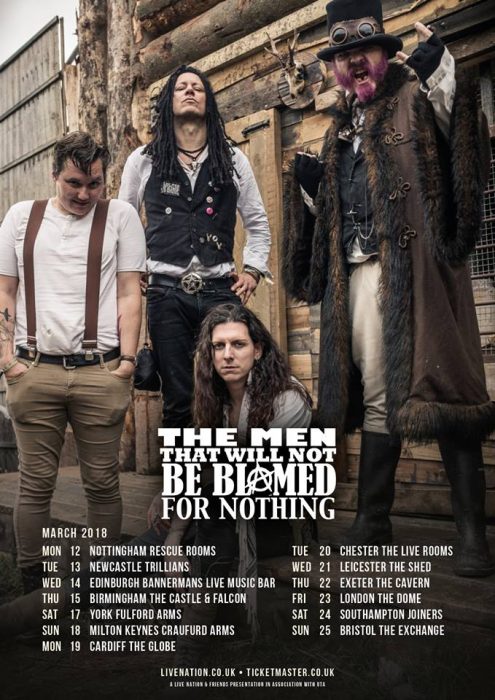 The Men That Will Not Be Blamed For Nothing Website

The Men That Will Not Be Blamed For Nothing Facebook

The Men That Will Not Be Blamed For Nothing Twitter

The Men That Will Not Be Blamed For Nothing Instagram

The Men That Will Not Be Blamed For Nothing on Spotify