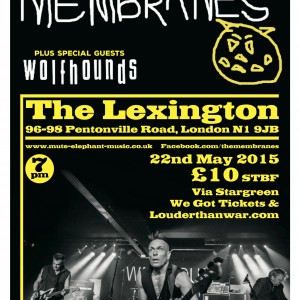 The Membranes launch their upcoming Dark Matter/Dark Energy album on Cherry Red records with a gig at the Lexington in London with some great bands joining them. This looks like a legendary gig- 4 great bands in one great venue for a May bank holiday London weekend blowout at the The Lexington.

The Membranes
The Wolfhounds
Faerground Accidents
You The Living

The Lexington has a capacity of 250 – this one is going to be rammed; please get you tickets in advance to avoid being left out in the cold!

Legendary post punk noisiness who reformed to play ATP at the request of My Bloody Valentine and then Shellac. the band have been recording a new album, Dark Matter/Dark Energy for release on Cherry Red and the launch party is this gig.

Their new album is a career best and Louder Than War has been raving about these returned C86 legends here.

Faerground Accidents Facebook page
A band so good that John Robb released them on his louder Than War record label, describing them as ‘a flash of inspiration in a grey music scene. They are the smudged lipstick on the mirror and an androgynous blast of neo glam – a unique band who are like an edgy version of Pulp – with a lipstick wearing, dressed to kill singer.They are trouble in a time when we need trouble – Indie has become boring – too many sensible bands. We need the freaks!
They write pithy, darkly funny songs that will be anthems in 12 months time and already 6music staples’

You The Living Facebook page
Described by Louder Than War as ‘You The Living create massive dark, melancholic slabs and washes of sexy dark pop. Some would say Goth, some would say shoe gaze but some would be able to hear something stunning and original going on here. With their whispered vocals and intense ice cold slabs of guitar in the background this is a band creating something very. very special’