The Membranes great live review from Zagreb
‘hyperactive, charming and immaculate ‘
Live review from Sofia, Bulgaria
‘ The Membranes are one of the most powerful groups I have ever heard live…’
Another great live review from Zagreb, Croatia here
‘Great The Membranes review from recent concert in Zagreb
‘The legendary John Robb with re-assembled the band The Membranes summarizing mostly repertoire comeback album “Dark Matter / Dark Energy” with several old trump of 80 bright, very simple performance with Robb’s bass guitar in the foreground that is in fact 50% of the entire audio content. The guitarist is here, I will not say sporadic though has significant experimental improvisation / noise contribution (playing with a bottle, stick, slide effects), while the drummer what it should be – chronometer which keeps pace. Robb them louder than their distorted bass filajući and riffs and melodies, as well as keeping the whole show on the level of first-class theatrical punk spectacle simply because he lives for the stage and those 40-50 minutes on it. Nabildan, full fitness, and healthy humor, constantly taking his comic gags animating the audience every now by passing some stunt, among other things, that the Manchester capital of Britain, or, as he said, that the drummer can feel free to send questions about the universe because scientist, however, is a question from the audience ‘where goes dark before sunrise’ answered ‘in your soul’. Repertoire is not stuck in a darker, atmosferičniji and drone / ambiental spectrum comeback album holding only energetic songs which included “The universe explodes into a billion photons of pure white light”, “Do the supernova” and “dark energy”. Excellent and clear, there is nothing, and I guess this is not their first and last appearance in our region.” 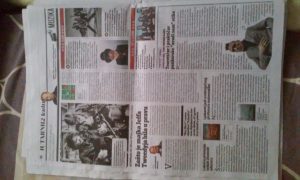