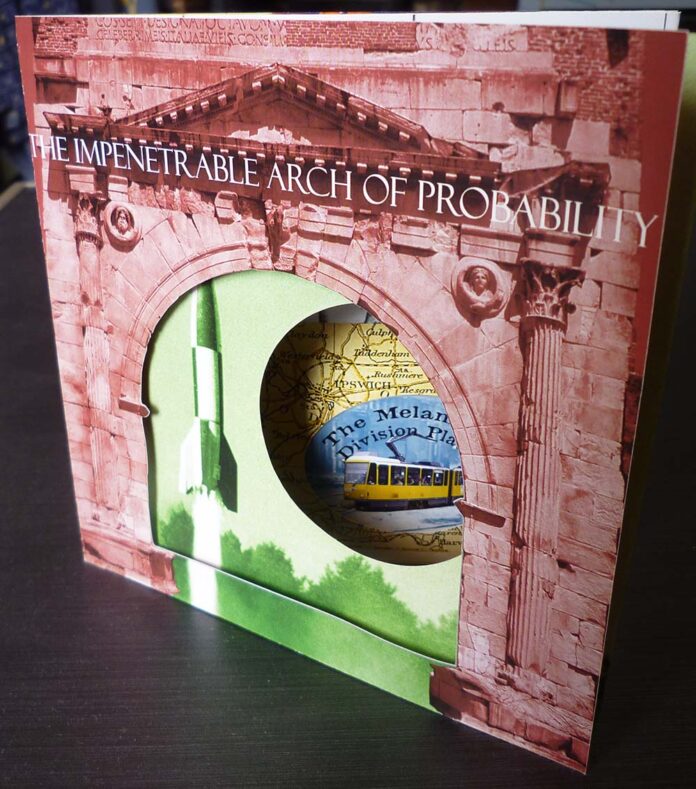 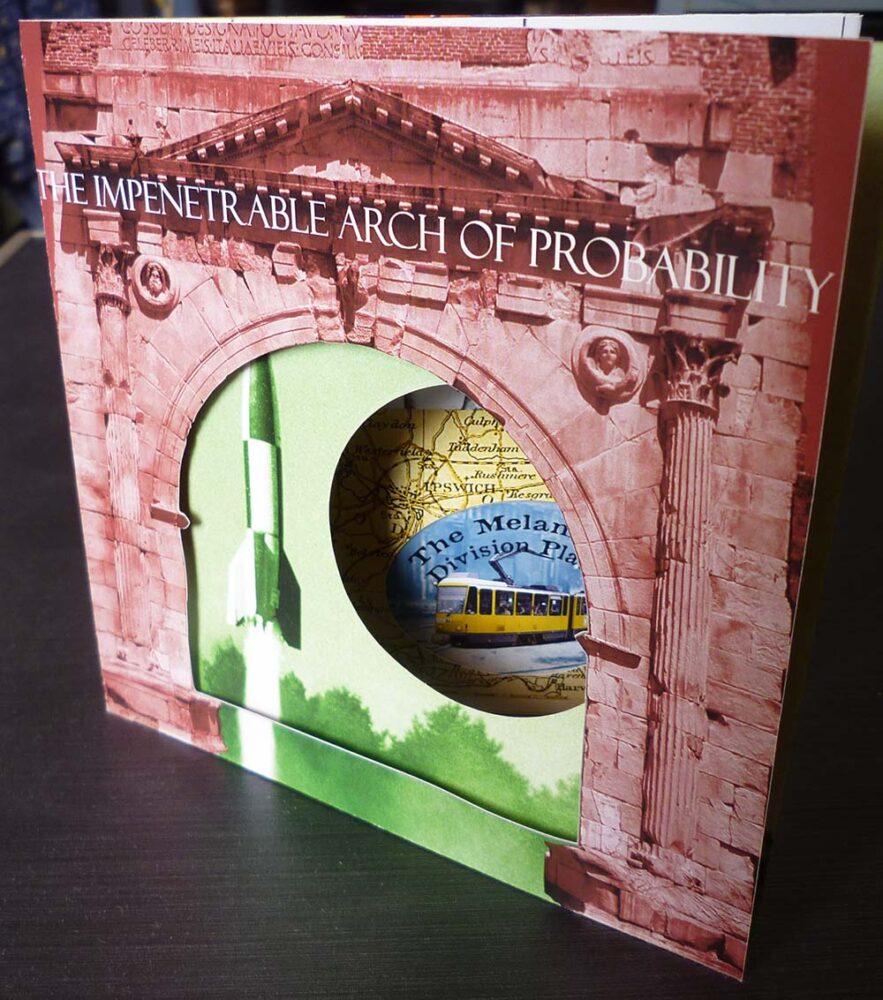 The Melamine Division Plates – The Impenetrable Arch Of Probability

The follow up to last year’s Novosibirsk finds guitar instrumental/psych band the Melamine Division Plates investigate all kinds of weirdness in both the Second World War 1940s and the present day, with ex-Deep Freeze Mice leader Alan Jenkins somewhere in the background….LTW’s Ian Canty is underneath the arches….

Experimental surf music practitioners The Melamine Division Plates’ last album Novosibirsk was one of the highlights of 2019 for me (reviewed here). It was a curious but enthralling mix-up of surf guitar instrumentals, space rock and psychedelia, like Joe Meek cooking up a soviet rock opera. Like nothing else really and all the more refreshing because of it. The four piece of guitarists/organists Bob Hare (who is also listed as playing “wooden monkey”) and Sebastian Rice plus a rhythm section of Ron Explosion and Magdalena Douglas are back, with Cordelia kingpin Alan Jenkins no doubt in the background somewhere too, with another album The Impenetrable Arch Of Probability.

Made up of 16 all-new tracks, it comes with a sleeve note which juxtaposes the present-day diary thoughts of Melamine Division Plates drummer Mag Douglas and German V-2 bomb inventor Walter Dornberger’s back in the 40s (his diary entries are presumably fictional). Dornberger famously announced on 3rd October 1942 that space travel had arrived, whilst Douglas in her log addresses cancelled tour dates in light of the coronavirus pandemic. As the story goes on, a link between the Melamine Division Plates’ plans for an elaborate stage show and Dornberger’s “flying bullet” emerges. The LP is housed in a intricate fold-out sleeve including photos and illustrations that if anything only serve to deepen the mystery further. As to what the music contained has to do with all this, I’m stumped, but I had a fine old time trying to figure it out.

Describing how the Melamine Division Plates sound on The Impenetrable Arch Of Probability to anyone presents a few problems. Perhaps they sound a bit like if the experimental bands in Germany in the early 1970s had decided to go right back to their very earliest days as part of beat groups. They then conjured up a sound indebted to guitar/surf instrumental bands, but still put their Kosmische wanderings on top and stretched out the running time on occasion too. Plus of course they somehow managed to reanimate Joe Meek to take on production duties.

That may sound quite inaccessible on the face of it, but if you like the guitarwork of the Ventures and the Shadows it really isn’t that much of a stretch, especially if you have a taste for the outré too. As The Cat Flies opens things up with a speeding rhythm and some prime guitar soloing that flits between surf and psych. Sounding like the Tornados on a post-Telstar mission, Rudolf Hermann’s Supersonic Wind Tunnel is a fitting title, as a drum pattern is jubilantly battered out under gale force conditions. Fear Fear Fear is somehow lighter but also more psychedelic in its second half and a lovely fairground organ riff is the highlight of this one.

(in lieu of any available video from the album, here’s the MDPs in action a few years back)

What sounds like a fruit machine malfunctioning is found amongst the gritty thrust of Lotte Didn’t Want To Read The Paper Today. This is followed by the delightful, halting strum of the intro to Zu Den Planetenraume, which then develops via some freaky guitars into an ornate space rock mood piece. Flight Technology/Apples snapped me out of this reverie and into more standard ESM/spy film theme music with powerful drumming, before Sinister Roaring In Tuchola Forest Again, which is initially in a pacy garage rock mode. The whole thing shudders to a halt, then settles awhile with synth squeaks, before starting the initial tune again. This occurs more than once, giving the track a cyclical feel.

There’s some golden guitar moments as well as jazzy playing on The G And The Right Arrow and Gone follows in a more straightforward fashion too. Round The Side Of The Third Front has a fuzzy, ominous organ as the lead and the first human voice of the album and an anguished one at that. Then the track Free Gyroscopes looms eerily into view, before settling down into a bright but slowish Shadows thing with plenty of organ shapes too. It’s a little shocking to hear the electronic rhythm it Erroneous Recalibration, but it is soon juxtaposed with ESM guitar, though ghostly strings lends part of it a decidedly avant garde tint.

Revenge Of The Bat’s hammering drums don’t hide a neat bassline and Brennschluss Time Is Here Again has a scratchy sound that underpins organ and guitar flourishes, before manically picking up pace. Penultimate offering Slowly Filling With Purple Water gives us some prime garage punk, a real goodie and closing item The Day The Nose Fell Off starts with their familiar sound before stopping and a gentle dreamscape emerges. Soon the tune comes back in, but then bird sounds and drones dominate. Atmosphere rather than melody take over for a time, before twisting and turning into church organ, strings and a clarinet duetting with synths. Finally it returns to its guitar instrumental theme to end an everchanging monster of a piece.

So what have I learnt from studying The Impenetrable Arch Of Probability? Er, not much. Have I had fun doing so anyway? Yes a great deal. The Melamine Division Plates’ highly accessible brand of madness always has so much in it to pick through and contemplate. This record really is both a joy to the ears and a conundrum for the brain. At the moment with no gigs on the horizon (even bearing in mind a V2 enhanced stage show) and a fair bit of time on one’s hands, something as intriguing as The Impenetrable Arch Of Probability is a positive godsend.