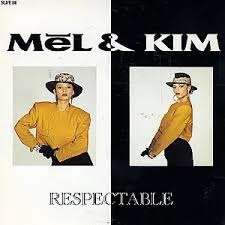 Seven disc boxset featuring the singles recorded by 80s Hackney pop sensations Mel & Kim, including a mind-bending amount of different mixes…..LTW’s Ian Canty ta ta takes a look at the very concept of “Guilty Pleasures” and tries to remain fresh in the run-up to the weekend…….

“Guilty Pleasures”? What complete rot. Don’t you have a backbone? Being ashamed to say what you like because of someone else’s idea of “cool” is ludicrous in my opinion. You should embrace what you love whatever “received wisdom” or any such other nonsense says. I love Mel & Kim and I’m proud to admit it. They passed every single test there is for great pop music and with flying colours in my eyes too.

The songs that they recorded were just right for them, but what made them transcend everything else that came out under the Stock, Aitken and Waterman banner was the sheer ebullience and style that the Appleby sisters bought to the table. They had more attitude than a shed load of Spice Girls, but they didn’t even have to try. It was clear if you stepped out of line, they would boot you 10 foot in the air and quite rightly too, but remain classy whilst doing so. They had a very real streetwise, no-nonsense charm.

They made their breakthrough with debut single Showing Out (Get Fresh For The Weekend), kind of a Friday On My Mind for 1980s suburban Britain, cocking a snook at the drab working week (if you had a job at all that is). Even better was to come when the follow up Respectable topped the UK charts and was a huge worldwide hit in the early months of 1987.

This set is squarely aimed at big fans of the duo, seven discs with each one being the single plus a multitude of other mixes. Best to dip into from time to time than listen to en masse I would say. That is preferable to listening to 16 mixes of I’m The One Who Really Loves You in a row, which could have left me a gibbering wreck (or, depending on your viewpoint, more of a gibbering wreck).

After all these are not albums as such, they’re single tracks bundled together, so it’s an idea to play them as singles, one at a time. Pick your mix and grab a short earful of it, that’s what I did. If you want to listen to them in the context of an album proper, best get hold of a copy of the F.L.M. LP, but Mel & Kim always worked better over the short span for me.

Showing Out (Get Fresh For The Weekend), despite the thousands of plays over the years, still retains its brash charm, energy and tough sense of cool. A great debut single and a calling card for the rest of their career, there’s a real joy in the delivery which transports the song itself to a higher level. The extended electro drums on “The Mortgage Mix” is heaven for any 80s buff, taking this right down to the bare bones.

It is odd to think it was originally intended as the b-side to System, which also gets several remixes on the opening disc of the set. It’s not a bad song, but with a totally different emphasis than Showing Out, a bit more low-key. The thumping 12″ House Mix of System is a good instrumental take and the Garage Vocal version is just beautiful, cool electro soul.

Though their debut was a massive hit even that success was outstripped by Respectable, a number one smash hit in the UK and a lot of parts of Europe too. The song was perfect for the Hackney girls, full of irrepressible punch and with a “take us as we are or there’s the door” mindset. Unsurprisingly this disc has twelve versions of a tune that just wouldn’t quit. The original single was a great cut itself, the supremely confident but disarming delivery made for a stunning dance record.

The long instrumental play in on the extended mix does take away some of the impact, but otherwise it is a typical late 80s long version. The Extras Beats take has a few nice moves though, giving a different slant to things in a way that doesn’t rob the original of its energy. The instrumental cuts are good for singalongs and also prove how integral to the whole thing Mel & Kim were, stripped down to just the music this is fairly basic stuff. They transformed it into a true statement of intent.

The F.L.M. single came next, perhaps this one is not quite as strong as the previous two, but a catchy number with a fair amount of charm nonetheless. The Sonic Remix throws in a few warps to begin with and some dub effects and the Auto Mix uses echo well. But for me the two best takes after the single itself are the Two Grooves Under One Nation mixes, that have some nice hip hop/house touches. The Phil Harding Mix takes it down to the essentials with some nice trickery and the disc ends with a Showing Out/Respectable segue.

The next disc features I’m The One Who Really Loves You, which was only released as a single in the US. It made number 11 in the American dance charts and has a big 14 versions here. Definitely with a lighter tone than their previous hits, this is more or less a simple soul/dance track that doesn’t quite have the same appeal. A decent enough record, but you can see why they went with That’s The Way It Is as the fourth UK single. Having said that the mixes here often deviate to such a degree the song itself is hardly there. For instance, the Groove Dub breaks things down and adds subtle bits here and there, re-jigging the song’s base elements in an interesting manner. Away from the radical remixes, the Chicago Club Mix is lovely, probably better than the original single cut.

That’s The Way It Is was the duo’s final chart hit and this one is far more in what was became the recognised Stock, Aitken and Waterman sound. It does miss some of the fire that made their early singles so refreshing, but the cool and restrained vocals of Mel & Kim make it worthwhile. Flipside You Changed My Life is also present here in normal and instrumental forms, the vocal version being a decent pop tune with a good hook. In addition the Acid House remixes of the main track are interesting period pieces, all heavy stomping beats and eerie synths.

More Than Words can say was only released in Scandinavia for some reason, which may be why there are only two remixes, making it comfortably the shortest disc in the set. With a hip hop rhythm and a queasy guitar line, this is a good slower number if not really a natural single. This disc includes a nice extended version where the vocals really shine and an instrumental mix, plus another version of You Changed My Life.

The final disc kicks off with the Mel & Kim 1990 Megamix which has samples of Chic’s Le Freak (which is included on all these 1990 mixes) and as you might suspect jams Showing Out, Respectable, F.L.M. and That’s The Way It Is together, Stars on 45 style. An italo house mix of Showing Out follows with a bouncing bass line and 12″ inch and techno takes are also included. Personally I’m not that struck with these ones – they don’t add much and that house piano and the Chic bits show their age. If pushed I would say the Techno Mix of Showing Out is the pick here.

After all this success tragedy struck when Mel was diagnosed with cancer of the spine, which came to light after she began suffering severe back problems when on a promotion jaunt to Japan. She died in January 1990 from pneumonia that she contracted as a result of the treatment for cancer weakening her immune system. She was only 23. In tribute Kim recorded songs that they had worked on together for the second Mel & Kim LP on her Kim Appleby album, scoring a hit with the Don’t Worry single. Last year she played some festival shows celebrating the Mel & Kim songs and I was lucky enough to see her a couple of times. I’m happy to report she did marvellous justice to those great tunes. Kim also recently turned her hand to TV presenting, hosting BBC4′ s Smashing Hits! The 80s Pop Map of Britain and Ireland alongside Midge Ure.

As mentioned above you are either going to be a staunch Mel & Kim fan or an 80s remix collector to really get the best out of this set, lovely as it is. These records were made during the height of the megamix days and though the originals always hit the spot, there are a few good ideas and neat alternative impressions on the theme. Mel & Kim were an effortlessly cool pop machine, sadly cut down when they were only just beginning. You can hear their early potential being realised within these grooves, the streetwise verve and extraordinary charisma they brought with them is still as plain as day.

The Searchers: When You Walk In The Room – album review

March 24, 2019
We use cookies to ensure that we give you the best experience on our website. If you continue to use this site we will assume that you are happy with it.Ok