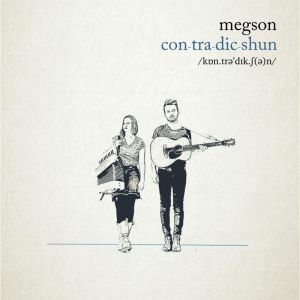 Four times nominated for BBC Radio 2 Folk Awards, Stu and Debbie Hanna are on another round of down-to-earth folk songs.

A mix of traditional songs rooted heavily in the North East plus a handful of their own originals, Con-tra-dic-shin finds them on a journey marked  with conversations and contradictions. Inspired by the 1870 book Tyneside Songs, Ballads and Drolleries, it gave them the title track composed originally by Joe Wilson, a Victorian Geordie balladeer to which they add their own tune whilst at the same time lighting the blue touchpaper on a collection (or should that be col-lec-shun?) that shifts from Victorian domestic disagreements to a 21st Century equivalent.

On the one hand, the traditional songwords lifted from Northumbrian Minstrelsy, Songs & Ballads of Northern England and Rhymes of the Northern Bards are all embellished with the tunesmith skills of the Hannas. The requisite drinking songs, fair maids and true loves are accompanied by a combination of sensitive and then more driving and passionate musical arrangements with the duo’s various strings and accordions given depth by John Parkers double bass and the occasional kiss and tickle of percussion courtesy of Patrick Duffin.

The Megson originals show off their unique perspectives and inventive rhyming patterns which more often than not revolve around the everyday and seemingly mundane. It’s what they do best and once again, they’ve turned to the commonplace for inspiration. Homeless judo clubs and caravanning holidays might not be the most glamorous topics but they provide plenty of fuel for the Megson fire.

Ultimately, it may be Two Sides In Every Conversation – the opposing views/interpretations  of a series of events from a couple in a relationship – that highlights the theme of the album. An album that’s nothing less than totally affable and accessible  yet with a hidden depth that those awards panels are obviously recognising yet seemingly not fully appreciative.

Watch the duo play the title track from the album live in Thames Ditton earlier this month:

They can  also be found on Facebook  and tweet as @megsonmusic. Check out their music on  soundcloud