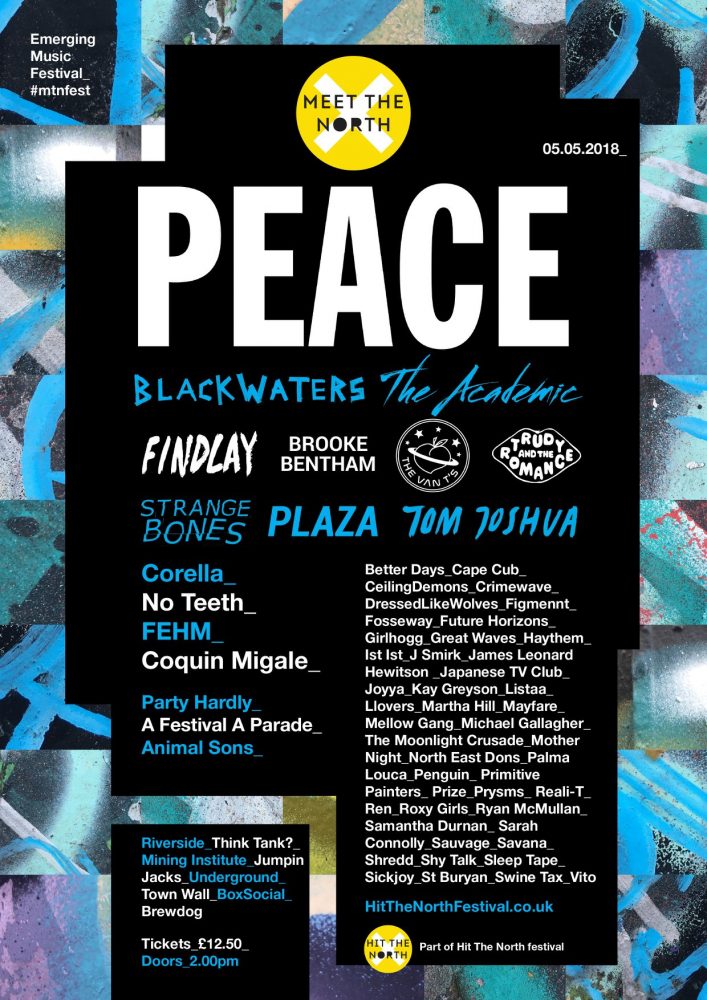 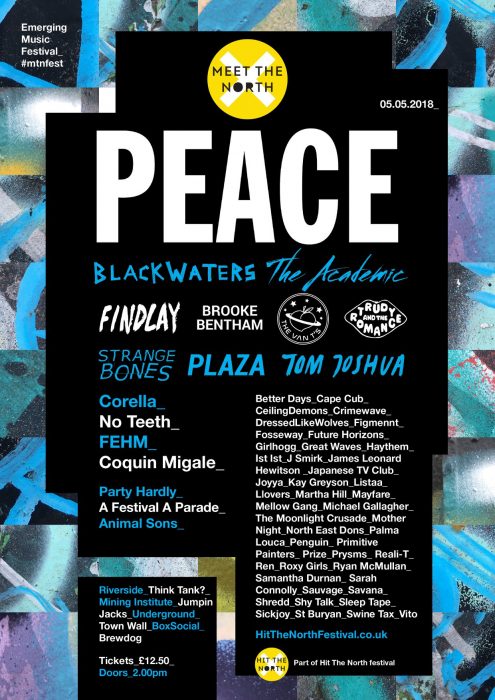 Hit The North festival is back! It’s little brother Meet The North takes over Newcastle next Saturday, check out our picks from this massive line up below!

Next weekend sees the return of Newcastle’s largest metropolitan festival, split over three days Friday the 4th will see three huge opening parties take place across the city. With Drenge making a welcome return at the Riverside, the almighty Jungle taking over the Boiler Shop and Circa Waves playing the O2 Academy. The main part of the festival, like last year, will also be split over two days.

First up is Meet The North with a plethora of bands, many of them as yet unknown, taking to stages across the city. The following day is the main event with a diverse line up of established and new bands taking over the city, but for now we’re concentrating on Meet The North and highlighting some of our favourites from this huge line up.

First up one of the more well known bands on the line up, Glasgow’s The Van T’s who return to Newcastle to provide yet another blast of their ecstatic surf rock. This four piece have been continually on the up since the first time we came across them eighteen months ago. With their snarling lyrics coupled with their tight riffs, they are sure to have everyone enthralled at Meet The North.

Sunderland’s Roxy Girls are one of the most exciting new bands in the North East right now, their sharp indie pop cannot be ignored as they channel the likes of The Futureheads, Parquet Courts and Wire into their own signature style. We’ve already been bowled over by this three piece a few times and it is without doubt that we’ll be going head over heels for Roxy Girls again come Saturday.

Another band who never fail to knock us for six are A Festival, A Parade the Newcastle four piece are by far and a long way one of the most underrated bands right now. Their sharp riffs and angst ridden tunes akin to those of The Twilight Sad and The National, every time we catch them we’re blown away even just as recently as this week! Without doubt these guys should be one of the biggest bands around right now.

North East super group Shy Talk were incredible at their first ever gig supporting Liars late last year, they’ve continued to go from strength to strength with their distinct brand of noise rock. The six piece are a true tour de force and destined for big things, It’s inevitable that they will put on a show worthy of stealing the show from anyone that has to play after them!

A band that could not be further away from many of these, yet still have the ability to truly captivate any audience are Thornaby’s Dressed Like Wolves. His heartfelt and delicate tracks are incredible he holds the crowd in the palm of his hand as he recounts his beautiful songs, it’s the perfect antidote to the barrage of noise that many of the other bands will be delivering on Saturday.

Another artist who has a similar effect on crowds is Hartlepool’s James Leonard Hewitson, whose blissed out indie pop provides the perfect relaxing soundtrack in the aforementioned barrage of noise. He is sure to be a voice of calm within this otherwise overactive melee of madness which is sure to ensue on Saturday.

One such band that won’t be providing any calm are Glasgow’s Shredd whose fuzzy guitar driven garage rock is sure to light the touch paper for many. This three piece have only recently come on to our radars but they certainly but they certainly have the pedigree having played shows with the likes of Thee MVPs and The Mystery Lights, adding to the excitement around their set!

Without doubt the hardest working band in Newcastle, No Teeth whom are constantly playing shows across the city, they’re on every other night and it really shows as they consistently impress wherever they turn up. There frenetic brand of noise is quickly garnering the praise that it deserves as the guys start to branch out away from the safe haven of the North East, they’re definitely on the up right now!

Leeds Post Punks FEHM will be playing both Live At Leeds and Meet The North this coming Saturday, their gritty bass driven tracks have always impressed us. Finally we have the opportunity to catch these guys in the flesh and we’re certain they will not disappoint, definitely one of the most exciting bands on the line up.

Finally, Strange Bones have been a favourite of ours for a while now, their anarchic shows are already putting the band on the map. Couple that with their equally provocative merchandise then there is no wonder why they’re garnering such an interest. They’re definitely not a band to be ignored and we cannot wait to see them again on Saturday.

Meet The North is certain to build on its brilliant first year and those above are just a small selection of the bands on offer on Saturday, there are a further 90+ bands who will be tearing through the city on the Sunday. We will come back to those though, but in the meantime check out Hit The North’s website here for more information and tickets for next weekends event!