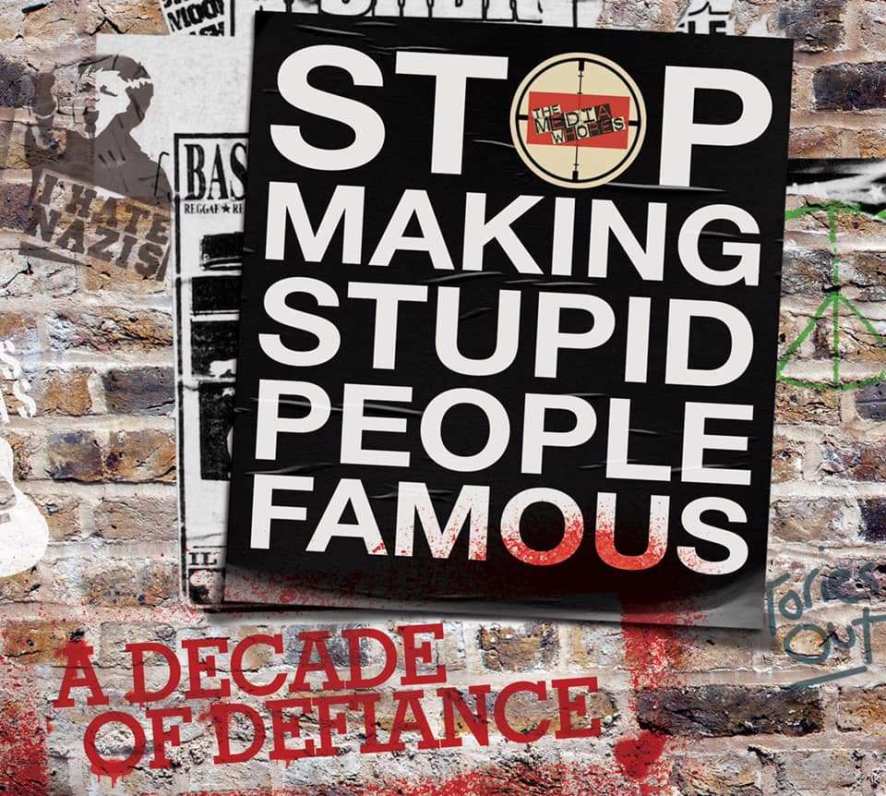 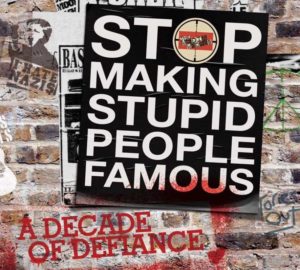 A Decade of Defiance

Mercury Music Award nominated for their last album, the magnificent work of art that is Dangerous Minds, The Media Whores release this phenomenal all killer no filler compilation as a precursor to their hotly anticipated fourth long-player coming later in the year.

A quick look at the album cover and track listing tells you a lot about the band and their stance on the hot topics of the day. Before you slip the CD out of the case and into your CD player, the cover gives you an indication of what to expect. Representing a wall covered in graffiti and posters with the key front cover image a poster bearing the legend “Stop Making Stupid People Famous” a salient comment on today’s society and the surfeit of talentless vacuous celebrities (I use the word loosely) who are only famous for being famous.

The many spray-painted slogans, “I Hate Nazis”, “Tories Out” & “Dump Trump” speak for themselves. Add to that the famed slogan Woody Guthrie had emblazoned on his guitar, “This Machine Kills Fascists”, and a quote from Guthrie influenced punk warlord Joe Strummer “The Future is Unwritten” and you get the picture. This highly considered cover continues the theme of wearing their causes on their sleeves, with previous album featuring images of the many “Dangerous Minds” reflected in the album’s title.

Of course, their real power is in their always lyrically hard-hitting often politically charged songs. Drawn from their back catalogue; Starfishing, Pornophonica, the Critical Political EP and the aforementioned Dangerous Minds the album track-list is a triumph, not only a great selection of tracks from now unavailable releases for The Media Whores aficionados, but also a fantastic introduction for the unacquainted.

A Decade of Defiance also includes a selection of 3 tracks from the forthcoming fourth album – in Cold War, Money and Big Pharma.

The Media Whores are a band who definitely, and defiantly, have something to say. However, unlike some bands who spout mere soundbites, you know the Whores mean it. They have the nous and noise to back it up. Where some punk bands fail to provide anything other than sloganeering, The Media Whores have the tunes, musicianship and intelligent lyrics in bucketloads.

So, what about those songs? Where do I start? No weak points, all highlights (as you might expect from a compilation). The quality of song-writing and virtuosity make The Media Whores rise above the mediocre and forge a path all their own with their punk rock roots forming the base for their own unique sound adding elements of rock’n’roll, jazz, rockabilly and swing to the mix along the way.

Despite their musical brilliance and Mercury award listing, the band continue to be blocked from breaking through and becoming as massive as they deserve. Ludicrously, their name may be one reason. While radio stations will merrily play sexually charged and misogynistic songs and artists, idiot radio play-listers take one look at the name, and, lacking the ability to make reasoned judgement pass them by. Can’t Say Whore on the Radio, but you can prostitute yourself from 9-5. The song itself is obviously one of the bands signature tunes and laments the blatant hypocrisy on show.

You may already have heard the new tracks if you are a regular Whores fan, these new songs effortlessly sit side-by-side with the classics of their back catalogue. Cold War kicks off the album with intent and the bands messages written all over it. Money had me initially trying to remember what floors in Grace Brothers sold what items…those of a certain age will know what I mean when you hear the intro, but you’ll soon forgot about that as the energy and clout of the song draws you in. The high-octane romp of Big Pharma complements the hard-hitting message behind the song – people don’t matter it’s all about the profits and power.

Power in the wrong hands is a message repeated elsewhere in the bands catalogue. Take, for example, the full-barrelled attack on the Westminster political establishment who are currently sleeping their way through the Brexit debacle, Zombies in Mayfair

The gap between the haves and have nots is challenged on the likes of Affluenza with its powerful bass guitar throb underlying the message of the rich getting richer and the poor poorer, and the theme is repeated on the powerful, both musically and lyrically, Black Widow. When we were young, we had to contend with the evil witch and Black Widow that was Thatcher in the 80’s, now things are arguably worse under Theresa May. Foodbanks, homelessness, bedroom tax, austerity and that’s without even mentioning the clusterfuck that is Brexit.

The album hits the establishment where it hurts track after track, not holding any punches. The power of the tunes matching the ire on show. Frack Off provides as much thunder and quake as the process itself. Do You Think I’m Lying is the hard hitting sonic equivalent of I, Daniel Blake while aside from the punk rock tinged aural attacks, Indiscretion, from debut album Starfishing, is packed full of chiming tremulous guitars.

Elsewhere, don’t get succoured in by the calming swing of Black January. The late-night jazz club feel soundtracks a tale of lives ripped at the seams. While Vinyl Head documents a love of music, records and bands that had something to say, as always with The Media Whores, has an underlying message: Music has the power to change. That isn’t what the establishment want though. They want people to be subservient.

Just look at the line up that has just been announced for TRNSMT. Designed to pacify and torpify, no rocking the boat from that lot. That is another reason The Media Whores don’t get played on mainstream radio, their music scares the establishment. Music HAS the power to change. We need bands like The Media Whores more than ever. Here’s to another Decade of Defiance. All power to The Media Whores. Keep on Whoring.

Get the album at one of the band’s upcoming gigs or from the band direct via their Facebook page.