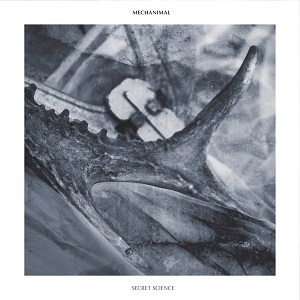 Why have a never been told how good Mechanimal are? Well, if I’d have listened to the recommendations of Transmission 13 I might have known. But, why aren’t Mechanimal more in my face? Why haven’t I fallen in love with their music before now? I have now.

Born out of the unrestful streets of Athens in 2011, fronted by Giannis Papaioannou a journalist and pioneer of the electronic music scene the group produce an exciting mix of industrial-electro-post-punk which recalls Rammstein, Kraftwerk and Joy Division.

Their sound is fresh and clinically raw, continuous bass throbs and krautrock melodies accompany spoken word lyrics and shoegaze guitars over ten tracks of the very highest quality. Album opener, Kindergarten sets the scene with a bizarre intro, almost haunting (imagine Tears For Fears’ forgotten b-side The Big Chair) with creepy voice and gurgling synth before guitars and bass synths crash in to complete the opus.

Sensucht then begins with a repetitive hook almost reminiscent of 80s electro as chugging guitars knurl away at the clean-cut sound with a raw passion. Vocals are wonderfully dark and even manage to sneak in a very effective chorus line.

We Come Alive cannot avoid the comparisons to a Depeche Mode remix, but what a compliment. Effervescent synths stamp along with a driving beat and vocals from American Freddie Faulkenberry add an enflamed semi-rage to the piece. His voice on The Den has similarities to the black, lonesome tones of Ian Curtis as Mechanimal continue to recount the troubled Greek landscape with convincing effect.

The group’s ability to effortlessly move between hard industrial sounds and more poppy electronica ones is superb as Song To The Sirens demonstrates. There’s something completely gripping about their sound that a UK audience would devour in droves.

Album closer, the mammoth Down in The Basement in sheer bliss. Constructed like your favourite extended remix it builds and drops and rises back again like a proverbial phoenix, and threatens to fill any void that the mighty Cabaret Voltaire may have left in our souls.

Mechanimal are exciting and bold and sinister. More importantly they are here, now, and just have released on of the finest albums of the year.