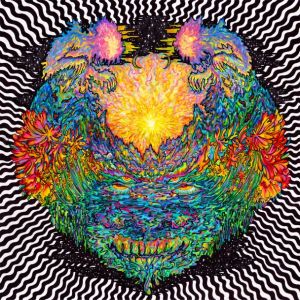 If you’re already a fan of Ty Segall and his collaborative family, then you’ll know the apple doesn’t fall far from the tree, and you’ll instantly embrace the rabid acid rock of Meatbodies. Meatbodies master the same speedy, full throttle riffing that Segall is known for, and probably share a passion for early 70s Black Sabbath; even the Meatbodies album cover art was done by Tatiana Kartomken, who also made the melting monkey dragon for Fuzz and the eyeless interstellar warrior for the Ty Segall Band’s Slaughterhouse.

Meatbodies was recorded by studio wizard Eric “King Riff” Bauer using all vintage gear, so that probably explains the LP’s gigantic, Godzilla-like presence. It is also a chameleon of shifting styles, trading off between light and loud in a way that cannily accentuates the wild intensity of its bigger moments.

Instrumental album intro The Archer is a shimmering freefall from space like something out of Tangerine Dream’s Phaedra, which disarms the listener before Disorder smashes onto the scene anchored by its incessant chugging riff, forward driving drum attack and nimble-fingered bassline. Things then slow down to an oily sludge like a warped cassette tape, and the killer re-recorded Mountain takes the reins, a track which debuted as part of Famous Class’ LAMC (Less Artists More Condos) 7” series, with Ty on the flipside (naturally). The song itself is as big as its subject matter, and although it rages, it’s also rich with a positive, hippie-like spiritual symbolism; urging the listener to “find your way through the hidden maze” and to fearlessly tackle the summit of this awesome Olympus which has a reputation for making ruins of less righteous men. The bass is as meaty and thick as a Katz’ deli counter classic, while the rest of its sounds ascend to such high peaks you may even get altitude sickness.

HIM starts as a squealer but changes up a few times, morphing into a melodic symphony of wriggly guitar harmonies. These carefully controlled musical intersections, from hazy, echo-laden psych laments, to the peculiar playful fantasies of glam rock, to straight up heavy face melters, are somehow pulled off beautifully, and shows Meatbodies is more than simply fast, pummeling riffs (although they are important!). Beyond the Ty Segall connection, another obvious touchstone for Meatbodies is Thee Oh Sees, heard most noticeably in the conversational strut of Tremmors and the reverbed yelps of Wahoo. Late album highlights arrive with Off’s domineering fuzz bass and deranged tangle of guitars, as well as the Barrett-like whimsy of acoustic based penultimate track, Dark Road.

Chad and the Meatbodies have cut an admirable first record that more or less faithfully recreates their exhilarating live experience (they pretty much conquered every stage during October’s CMJ festival here in New York). The performances here are brutishly extreme in intensity yet also scrupulously methodical and decisive, which makes things more interesting during successive repeat plays. If you’re a lover of the current Bay Area rock ‘n’ roll renaissance and people like Ty Segall and Thee Oh Sees, Meatbodies will already seem like a close friend to you, and if you’re one of those whiners constantly bitching about the state of rock music in today’s modern world, you clearly haven’t heard these bands yet.