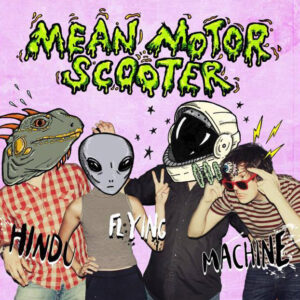 Texan quartet, Mean Motor Scooter, hit the ground running on their debut full-length, which is chock-full of quirky psych-garage blasts and fuzzed-out mayhem. Louder Than War’s Nathan Whittle takes a trip on their flying machine.

Mean Motor Scooter live in world of kitsch, fuzzy, sci-fi, B-movie paranoia. The songs on their debut album rocket by, chock-full of references to aliens, lizard men, crop circles, and all things weird and wonderful. After a brief alien-invasion-panicked telephone call, they kick off the album with the driving Dead-Weather-like We’re Not Alone, the recent addition of keys to their line-up adding jabbing pulses behind the distorted, broken radio vocals. From there, they drop into Wavespotting, like a gonzo Dead Kennedys spinning out of control. Mean Motor Scooter draw heavily on a classic garage-punk sound, but that’s not to say that it pegs them back in any way. Behind the fuzz of Sea Serpent lies a woozy surf backing that snakes along, but this is no California crystal-blue and white waves, rather a poisonous Martian swamp that rolls back and sucks you under.

Elsewhere, they either drop into lazy drifting interludes (Cosmonaut), or up the stakes in pounding paranoia, such as on album highlight, Shape Shifter and the driving Come And Get It. It also seems that they may have drunk from the same, “Let’s educate the kids” fountain of They Might Be Giants, with the almost Dr-Seuss-like rhyming educational tale of Sam The Homosapien, a story of the evolution of humankind, set to a bopping, jaunty rhythm that takes off into the fuzzosphere when they hit the chorus.

Part B-52s, part Jack White, a drop of Dead Kennedys, 100% B-movie trash, and all mixed up in their Butthole Surfers Texan heritage. Mean Motor Scooter’s blend of the garage-psych punk makes for a great record to stick on and go-go jive till the sun has set and the moons have risen.