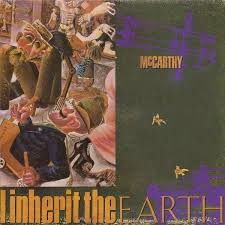 McCarthy – The Enraged Will Inherit The Earth

Vinyl reissue of political pop band McCarthy’s second album, with a second 12 inch disc given over to singles and rare tracks, plus bonus 7 inch Who Will Rid Me Of These Turbulent Proles?/You Had To Go And Open Your Big Mouth… Ian Canty hears sweet tunes wedded to angry words.

Though they emerged at around the time of C86 and even contributed to the album itself with their song Celestial City, McCarthy weren’t your regular indie pop hopefuls. They may have shared a certain amount musically with some of those bands, but their lyrics set them well apart, much more spicy than the lovelorn standard. Coming together in Barking a couple of years beforehand in 1984, the trio of Tim Gane, Malcolm Eden and John Williamson met at school and were joined later by newcomer Gary Baker on drums. The dynamic between Eden and Gane was crucial to the band, with Gane’s chiming pop guitar providing the foundation Eden’s finely structured songs, which twinned the political with the personal. This was innovative because virtually no-one else was providing this kind of detailed and nuanced political critique in a jangly pop context. McCarthy truly stood out.

They began their career on record with the EP In Purgatory in 1985, released on their own Wall Of Salmon imprint. After its success they then moved across to the Pink label (which was home to fellow Essex boys the Wolfhounds and also the June Brides) for the Red Sleeping Beauty and Francis Hals singles. Pink closed 1987, but almost straight after label founder Paul Sutton launched the September Records.

McCarthy moved onto this new label just in time for their well-received debut album I Am A Wallet. Critics were caught off-guard by a band who jangled ebulliently with the best of them, but also talked politics in an intelligent and passionate style. There was a tendency to invoke fellow Barking local Billy Bragg, but the McCarthy way was always less of a rant, more of a seductive proposition. The LP generally got good reviews though and was an Independent top ten chart hit. It also became a firm favourite of a bunch of Welsh youngsters who were in the process of forming a band called the Manic Street Preachers.

Even so September Records didn’t last long and after the This Nelson Rockefeller single in 1988, McCarthy left to find a more permanent home on Midnight Music. This set them up to produce their second album The Enraged Will Inherit The Earth and the vinyl reissue of that LP is presented here by Optic Nerve. Though some are keen to slot McCarthy into an indie pop box and treat their lyrics as just a novelty, something else emerges when you actually listen to them. Their music recalls the dreamlike headiness of PIL’s Poptones on occasion and they often evoke a woozy strangeness pleasingly out of step with their contemporaries that were more intent on aping the Byrds the Smiths and Buzzcocks. They shifted their sound noticeably on every record, reaching out for something only they could see, something only they could hope to attain…

The first disc of this set presents the album itself in the original running order on green vinyl. First track on the LP Boy Meets Girl So What? shapes up nicely into a withering and much-needed parody of the archetypal C86 band love song. The lyric takes an acidic and effective look at the refusal of indie pop to look beyond love and romance for subject matter and the way that devalues love as a result. It is also beautifully put together musically too, with the guitar weaving in and out.

Governing Takes Brains follows and it is striking how relevant that its story of government’s total contempt for the people is today. Nothing has changed and again Gane’s fluid guitar work pleases. In the next song An Address For The Better Off, Eden paints a vivid picture of a welfare system gone to pot through lack of investment and the band set this against a neat languid jangle beat. A brief and bright Hands Of Or Die details the desperate struggle for survival that can only fuel discontent and is supported by a incongruously pretty guitar pop landscape and more straightforward anti-war song What Our Boys Are Fighting For brings to an end the album’s first side.

Side two commences with Keep An Open Mind Or Else (also released as a single and covered by MSP), a jibe at narrow thinking embellished with a marching beat – I know I’ve mentioned the guitar often here, but the rhythm section is always spot on too. The lilting acoustic gleam of We Are All Born Creeps pits religion and power versus scientific findings on mankind’s propensity for evil, lively music making the topic all the more palatable. The Home Secretary Briefs The Forces Of Law And Order addresses the tools of oppression themselves head on, a nice buried organ part here shining. Keyboards are used sparingly on The Enraged Will Inherit The Earth, but always well.

A serene musical setting sees I’m Not A Patriot But… hark back to the anti-war message and the album itself ends with Throw Him Out He’s Breaking My Heart. This song closes the record on a low-key but suitably dramatic note, the message of the basic unfairness of capitalist life still relevant now. Ending with a sample that concludes “we’ve come for what’s ours”, this is a record that still has resonance today and sounds fresh and full of energy too, with no dated 80s production techniques to weigh things down.

Moving onto the second disc here, in an orange vinyl pressing, this one rounds up the single tracks from around this timeframe plus odds and sods. The headlong rush of the single Should The Bible Be Banned kicks things off in fine, raucous style and St. Francis Amongst the Mortals again uses religion as a jumping off point to consider the political background that feeds into the negative aspects of human nature, while sounding a little like the Cure’s In Between Days.

Endowed with a wisdom that is more salient today than at the time of release, We Are All Bourgeois Now looks at the “brave new world” that is just more of the same. The forceful guitar attack buzzes here and a real sense of urgency too. This Nelson Rockefeller, another single, sets off with nicely tense strings before a rougher guitar sound emerges. It’s always foxed me this song, but I considered that it was a spoof of the sort of paternal bigwig who tries to prove how compassionate they are by casting their loose change to “causes”. Though I could be wrong, this is an excellently thought out and realised single.

The New Left Review gets two versions, 1# from the flipside of the Keep an Open Mind or Else single shines with gentle strings. The McCarthy At War EP version aka 2# is a slightly longer and more of a “band” take, but both are pretty satisfying. In fact the EP itself is featured in its entirety, with the anti-apartheid song The Lion Will Lie Down With The Lamb focussing on the western business economy that propped up the South African regime. This is a very bouncy piece of pop music with a message, great stuff.

Lastly we arrive at the 7 inch single (red vinyl this time) that is included here as a further bonus. Who Will Rid Me Of These Turbulent Proles? is a really good fast number, with rickety and smooth guitar lines combining well. You Had To Go And Open Your Big Mouth brings the final curtain down, funk guitar and irrepressible rhythms, much more a soul/r&b piece than anything that has gone before. A real change of pace to end with.

After this album Lætitia Sadier joined the band and they recorded their third and final collection Banking, Violence and the Inner Life Today, which was released in the spring of 1990. The record was again popular, but the band felt they had gone as far as they could and split soon afterwards. Sadier and Gane of course went onto form Stereolab to much success. Eden put together his own band Herzfeld, with Baker and Williamson opting out of performing.

Handsomely presented in a gatefold sleeve, The Enraged Will Inherit The Earth in this form rounds up McCarthy’s work at what arguably was their peak. Both the music and words have stood the test of time, not sounding trite or dated in any way. Though such a high-spec reissue seems a little at odds with McCarthy’s firmly anti-capitalist stance, this is a great collection that brings the band back into the public eye just as a great deal of the subject matter included is becoming all the more relevant and being keenly felt in 2020. That things haven’t improved over the space of over 30 years is perhaps something we should all hang our heads about. But take heart from McCarthy on this LP, shining through the years, still a beacon of hope wrapped in smart and tuneful pop. We need them now more than ever.