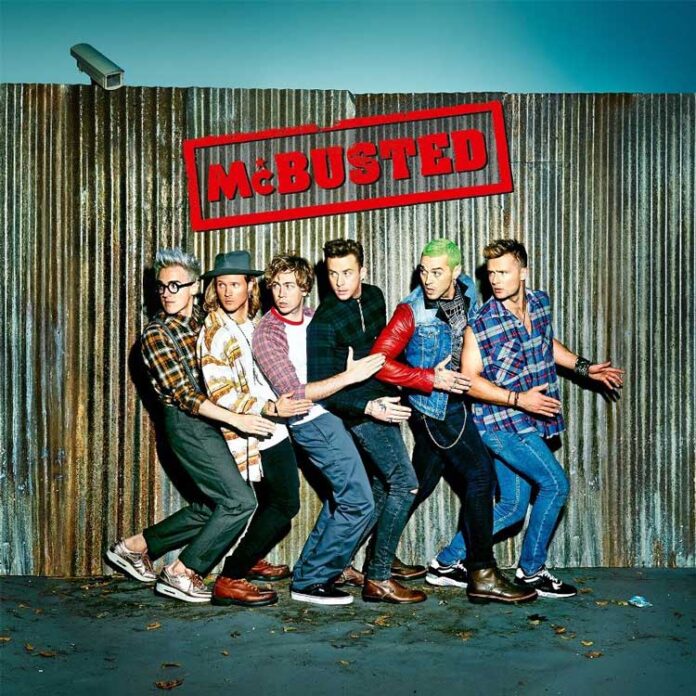 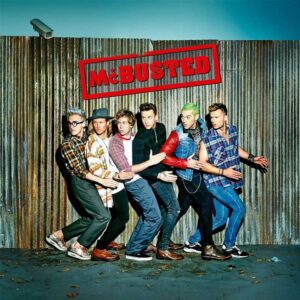 Claiming that the realisation of this supergroup (they’re formed from the whole of McFly and two thirds of Busted, don’t you know?) has been one of her top pop moments of 2014 our features editor Sarah Lay has been almost giddy about their debut eponymous album. She’s calmed down just long enough to tell us about its keen cultural references wrapped in punchy punk pop.

Ok…let’s get this done up front. I know some of you are of a sensitive disposition so fair warning. Here’s what’s going to happen: I’m going to write about a punk-pop boy band.  I’m going to write pretty positively about them because not only is the idea of merging two of the best pop bands of the ’00’s together stupidly brilliant they’ve then made a ridiculously fun debut packed with huge riffs and sassy lyrics.

If this is the sort of thing that makes the vein in your forehead throb and flurries of indignant musical rightousness spew from your keyboard then it really is best for us both if you just MOVE ON and pretend you didn’t see any of this. Honestly, you don’t have to read EVERYTHING on the site (but thanks if you do).

Still here? Nice one. Let’s get giddy over McBusted.

So, first there was Busted and they bought us such mega pop hits as Year 3000, What I Go To School For and Sleeping With the Light On (yay!) but they split up in 2005 when Charlie Simpson decided to go all serious indie rocker with his new band Fightstar (boo!). But the blow was softened because McFly was flourishing (yay again!). They blossomed from 5 Colours in Her Hair through the second half of the last decade with five albums and a bevvy of chart toppers.

For those not paying close attention these two bands may have appeared similar but otherwise just back-to-back rise and fall in an interchangeable but marketable format of ‘boy band with guitars’. The relationship between the two was actually much closer with both bands writing on the other’s albums, a shared sound and set of influences as well as close knit friendships between the members.

And as we near the end of 2014 and McBusted have released their eponymous debut off the back of a 35-date tour it seems blindingly obvious that best two thirds of Busted (James Bourne and Matt Willis) would join their compadres McFly to become one single, all power-chord-ful pop-referencing entity. One that not only has the huge back catalogues of both bands to pick from, but now a new shared canon of overblown theatrical riffs and smartly snarled lyrics as the soundtrack to six mates sharing with us the bloody good time they’re having making music.

Let’s start with first single Air Guitar as an introduction to the hybrid and the album. It’s just over three minutes of pacey electro bleeps and building rhythms which climax in squealing guitar licks. The tale of an Air Guitar obsessive it references Beyonce and MJ while taking a snide look at the modern obsession with fame regardless of real talent. Or it could genuinely be about the pure joy of fantasising you’re the world’s greatest axe-man while slashing at an imaginary guitar. It’s sometimes hard to tell how much of this album is tongue in cheek, how much is very smartly holding a mirror to pop culture and how much is just pure dumb fun.

Influences are unabashed throughout – with heavy references to early GreenDay, Wheatus, Weezer and Blink-182. It’s Mark Hoppus from the latter who features on the childishly spiteful Hate Your Guts. A shouty chorus and petty curses so precise they walk a very fine line between being laughable and uncomfortably malicious.

There’s introspection too in What Happened To Your Band, undoubtedly referencing the years in the wilderness the Busted boys endured after their original outfit ended. There’s a thick surface of layered guitars to get through but the blunt lyrics leave no doubt that behind the smile fronting all the songs, here there is a remembered misery of inter-fame years.

It’s not all pure guitar-driven punk pop either. We get more electro numbers with Get Over It and Gone that recall more recent McFly numbers (like Shine A Light) that soften the over-riding chug of the album with synths and layered harmonies.

It even gets lo-fi with Riding My Bike, a sparse 8-bit beep and bounce which is closer to Bourne’s Future Boy incarnation than either of the band’s back catalogues. It may be a simplistic but the vocal effect and swirling electronics are efficacious of free-wheeling on two wheels with a heart beating with the promise of a coming encounter.

There’s tracks which in a superficial way cover modern day masculinity and how tied with physical appearance self-worth is (Sensitive Guy and How’s My Hair). They pull off that wonderful pop trick of being instantly catchy and apparently superficial throw-away songs, but spending just a little more time with them surfaces underlying comments on the society we’ve shaped. Let’s not get carried away – McBusted do not explicitly offer deep and meaningful discourse on modern life but neither is this pop-by-numbers or songs which could have been handed out to an X Factor clone; they almost burst with this band’s personality and it’s interesting to see the two groups come together in one cohesive identity.

Melodically and lyrically we get a highlight with Better Before You Knew Me. This is another three-and-a-half minutes of pounding riffs and beautiful drum falls backing some of the smartest lyrical slights and shrewd references we’ve heard on recent record. Again, first listen leads to delight but step back from that first impression and you wonder how much this song says about male wariness of strong female identity, perhaps accidentally reflecting how unattractive male behaviour is perceived to be in women. And given that most of McBusted’s fan base is youngish women I’d hope that any of them picking that up from the song experience it more as a sad comment about male insecurity than they do hear it as a call to shape themselves beneath the male gaze.

This, then,  is an album on it’s knees, fists held to the sky in the pouring rain; it is a windblown solo on a mountain top; it is the pop Spinal Tap. But it’s also a rollicking 40 minutes of high adrenaline punk-pop fun. It’s easy to throw shade at boy bands for lacking authenticity but love them or hate them McBusted tick a lot of those ‘real music’ boxes with proven songwriting chops and synchronised chord-jumps rather than dance routines.

This is most definitely on the pop side of the punk-pop tracks but it’s a set of songs so absurdly catchy, and lyrics so brazen in their referencing of popular culture that it leaves a big goofy grin on the face.

Music can (and should be) fun sometimes – McBusted are showing us all exactly how that’s done with an album that may start as a one night stand and end up being a collection of songs you unwittingly, but wonderfully, fall into a light-hearted relationship with.

You can get the McBusted album now and the band are in tour again in spring 2015.

All words by Sarah Lay. You can read more from Sarah on Louder Than War here – not all of it is about boy bands.