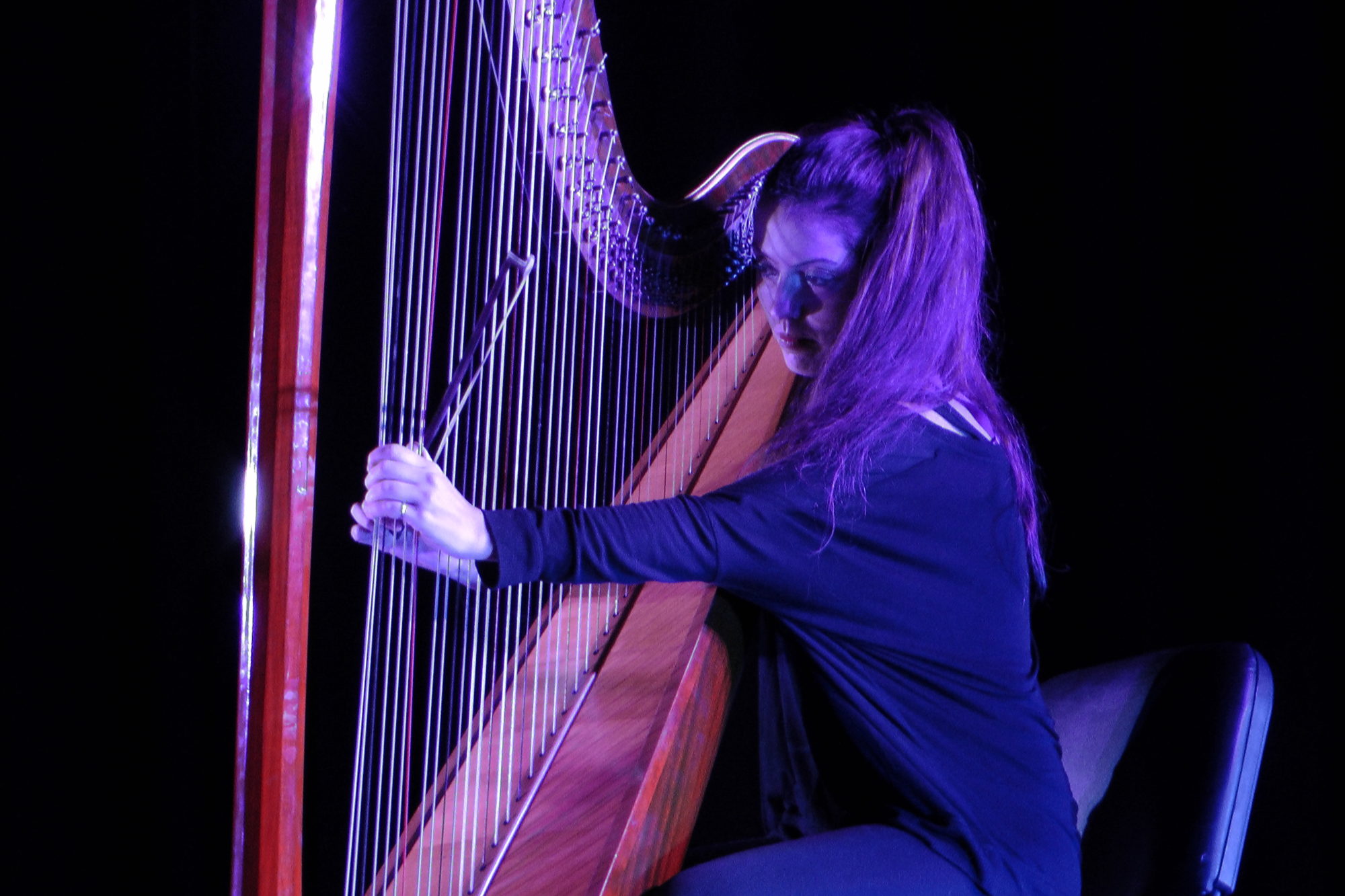 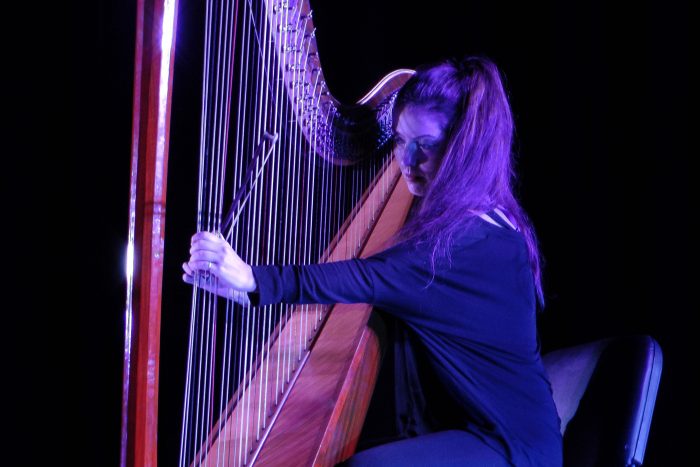 Maria-Christina (MC) is a musician who makes the harp sound like you have never heard it before.

Her debut LP ‘Gluten Free’ is due at the end of the month (Friday 29th September 2017) on Valentine Records, under the artist name ‘MC & The 7 Pedals’ – and Louder Than War’s Emily Oldfield managed to speak to her prior to the release.

Intrigued? In this album London-based Maria-Christina will magic you on an instrumental journey, featuring her work on an enormous electro-acoustic harp and distortion pedal effects – hence the name ‘7 Pedals’.
Expect spiralling  soundscapes, delving depths and beautifully-expressed, billowing darkness.

The music of ‘MC & The 7 Pedals’ blends influences of travel and the passing of time – homage to her own Greek background – as well as distortion effects, bows, even pieces of paper: to allow the harp to take on not just the sound of bass, but guitar and percussion too.

This is music which turns a harp into a whole band so to speak, creating highly rhythmic tracks with heady heights and dark depths. It challenges the stereotype of harp music as just sweet melodies and takes on big themes and emotions.

And it’s not just the concept which is compelling… the sound has many hooked already. Maria-Christina has already performed on Later with Jools Holland on BBC2, at the Montreal Jazz Festival and also at the BBC Radio 1 studios. She’s also toured and collaborated with a number of artists including Katie Melua, Alani and Pete Long.
Here’s what she had to say ahead of her own debut:

1) When did you first begin playing the harp and can you describe your relationship with it as an instrument?
“I started playing the piano when I was 5, only because there wasn’t a harpist in Athens were I grew up. So, when a harp teacher arrived in Athens a few years later, I had the chance to start playing. That was a happy day! I think there is a strong relationship between harpists and their instruments because you spend a lot of time with your harp. Obviously all musicians that are serious about music spend many hours practicing, but with the harp you also get to spend time by maintaining it, transporting it, driving around in traffic, trying to find parking, carrying it up or down stairs of a venue or recording studio…”

2) How long have you been working on this album and is there a particular inspiration behind it?
“A very long time… it’s been 4 years from the recording days, obviously I haven’t been working on it non stop, I was also busy with other projects and collaborations, but it was always on the back of my mind even then. I started writing for the harp when I wanted to explore the instrument’s technical capabilities and I realized even more that the existing repertoire and state of the position of the pedal harp in the modern music world is still quite behind compared to other instruments. So, it was a great opportunity for me to challenge myself and see what I could do. This album is an attempt to have fun with composing and also playing with different guitar pedal effects.”

3) The working title was ‘Dark Side of the Harp’? Why did you eventually decide on ‘Gluten Free’ instead?
“There are a few tracks on my album that people have said that they find dark and sometimes scary..in a good way (they add).  So I thought about this title, inspired of course and playing around with Pink Floyd’s title ‘The Dark Side of The Moon’. But when I thought about it more this title didn’t really match with how I felt about it, it doesn’t scare me, so I went with Gluten free as a title because that’s how one of the tracks is called and the title is kind of fun.”

4) Why did you choose to record in an abandoned church and what do you think this adds to the music?
“The sound engineer that recorded the album knew about this church and after listening to the tracks he suggested we record at this beautiful and cosy church. I loved the acoustics of the church but it was difficult to find quietness,  as it was May and we could hear birds singing in every song. Otherwise it would have been lovely to hear birds singing but in that case we needed to have some tracks without bird sounds (!) So, we started recording late at night which was perfect not only for me but also for the aesthetics of the album.”

5) ‘Gluten Free’ seems like an unusual subject for a track? Why did you decide to focus on this?
“Most of the tracks of the album have a direct link to personal experiences. At the time that I wrote Gluten Free I had just started a Gluten free diet and found it challenging to keep up with it, I felt angry and hungry so I wrote a piece on the harp about it.”

6) What has been the most challenging aspect of recording the album?
“A few things, but mainly keeping calm when many things didn’t happen exactly as I wanted. I fought for the things that were essential to me and became a bit more flexible. (a bit!)”

7) And the most rewarding?
“The feeling of completion when you hold it in your hands for the first time, knowing that you can now move on.”

8) Why have you chosen to release on Valentine Records?
“The people behind it and their attitude towards music are the two main reasons. I always preferred an independent label that can create a personal relationship with their artists and who understands their music and their genre. Our collaboration has been great throughout; they left me total freedom with the artwork of the album which was important for me. They are very nice people and they love music.”

9) You mention that the track ‘Little Slaughtered Lamb’ was inspired by over-consumption in the meat industry. Can you explain a little more about this and do you aim to be ethically connected in your music would you say?
“Interesting way of putting it.. it’s only after I have written a piece that I think more about it. For Little Slaughtered Lamb it was a matter of a personal experience again: it can be a weird experience sometimes to be a vegetarian when you come from Greece.Of course nowadays I think we all become more aware of what is happening around us in our consumptive cultures, from food industries, to people suffering so that we can buy cheap clothes, shoes and the list is endless.. so yes, I am interested in being as responsible as possible in my everyday life decisions and that has an impact in my music too.”

10) Is there something in particular you would like people to take away/experience on listening to this album?
“They will certainly discover that a harp can be played in a different way!” 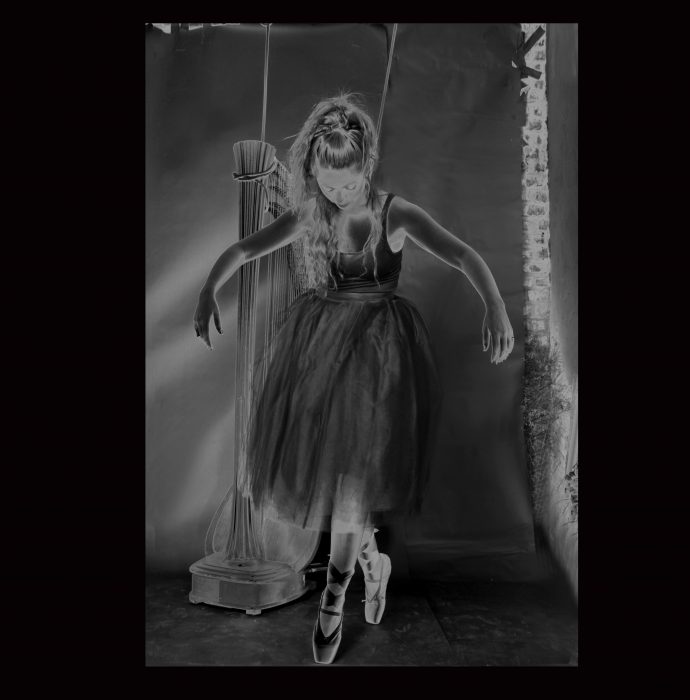 11) What was the experience of filming the music video for ‘Pandora’s Music Box’ like? Is there any other track you would particularly like to make a video for?
“It was a lot of fun. I had ballet lessons to be able to stand and make the turn you see on the music video and I have a new admiration for ballet and ballerinas now…there is a lot of pain involved. Ballet has similarities with the harp, they both were intended to make you look beautiful and gentle but like ballet can have cruel effects on your body with painful fingertips, or back issues when carrying the harp around. The main part is that the story line follows the music. I have made a music video for Little Slaughtered Lamb in an abandoned sanitarium and it will be ready soon.”

12) ‘Mother in Law’ is a very long track indeed – did this require a certain stamina? Is this the longest track you have done?
“And it was longer, but my sound engineer insisted that I should make it shorter! Thirteen minutes was the shortest I could do! It’s one of my favorite tracks and I never know how time flies when I perform it, it’s quite repetitive and I use the cello bow a lot in it which is one of my favorite ways of playing the harp.”

13) What are your future creative plans?
“To continue playing gigs, mainly promoting my album. And gradually thinking more about my second album…hopefully I will need less than four years this time!”

MC & The 7 Pedals will be performing live in Manchester at FUEL in Withington on Sunday October 1st along with Caro C, a DJ set from Mark Corrin and more supports to be announced.

To find out more about ‘MC & The 7 Pedals’ she has a website, is on Facebook, Soundcloud and also the Valentine Records website.
Photo 1 – Alex Adam, Photo 2 – Christina Jansen