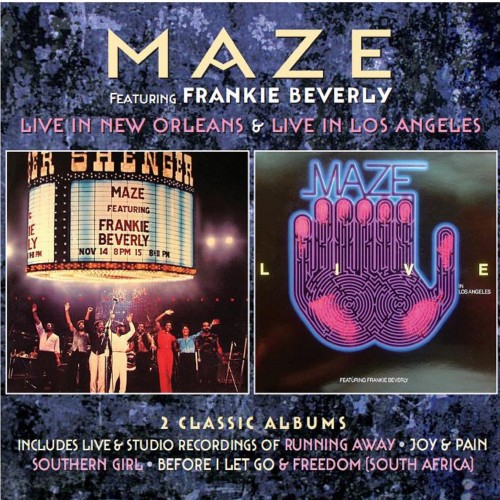 Maze Featuring Frankie Beverly may have been part of the Quiet Storm movement but they were also one of the all-time great live band as these vintage performances prove.

In an age of manufactured pop bands who can’t sing – let alone play an instrument – this double release is a tribute to an act who managed to do both supremely well, and at their peak would have a decent claim to the best live band on the planet.

The Maze studio albums were part of a radio driven FM driven movement dubbed Quiet Storm – characterised by mellow dynamics and laid back tempos. Think Steely Dan married to funky soul grooves.
Maze studio albums were pretty decent affairs, but it is when they went on the road that they really made sense so it is no surprise that their label released these two live albums.

As well as a gaggle of red hot players the secret to their success was Frankie Beverley’s vocals as his strong, soulful voice had both the power and depth to ride the storm the band kick up on both albums.
Live in New Orleans recorded in 1981 was the more commercially successful of the two and is – despite some sophisticated playing – still pretty raw where the Live in Los angles recorded half a decade later is much slicker.

Live in New Orleans gets into its stride early doors with an epic, heartfelt version of their anthem Joy and Pain as Beverly smashes it over a slinky grove. Southern Girl is pin sharp but Beverley brings raw edge to it as he pays tribute to the women he has known who live below the Mason Dixon Line. There is something wrong that a semi -forgotten stone cold classic like Running Away is not a stable of daytime radio alongside other R and B classics but on this album Beverly and co really rip it up.

The Live in Los Angles kicks off with Running Away and although Maze and Beverly are on great form it feels more rehearsed which might just be due to years on the road or a deliberate change in direction. It might also explain the relative lack of commercial success.

Adding to the mix is a rare political tune Freedom (South Africa) where Beverley really gets under the lytic called for black South Africans to be freed from Apartheid. It’s particularly powerful given that Maze’s parents had only just won their own freedom a couple of decades earlier.

All too often these days R and B can be derivative – or self-aggrandising – but as these albums serve as a reminder that Maze and Frankie Beverley were not only pioneers, but a red hot live band which makes it no surprise that they are still packing big venues to this day.