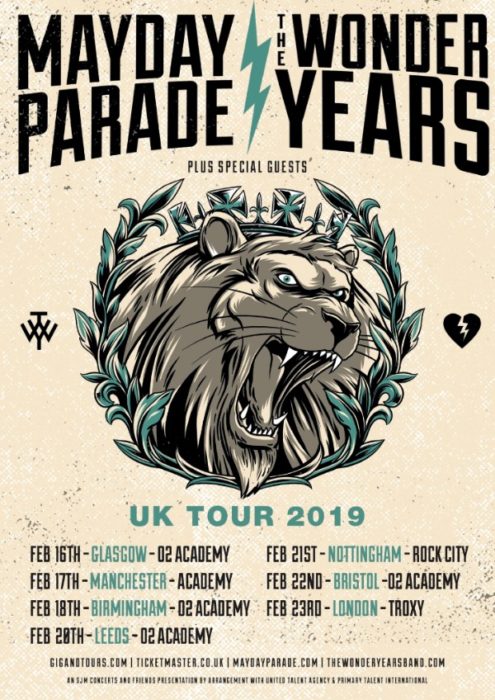 American rock band Mayday Parade, recently signed to Rise Records, released their sixth studio album Sunnyland this summer. The release was a tentative move away from their previous release’s with contrary upbeat emo harmonies, greatly enjoyed by fans and critics alike. Mayday Parade have built their ten years in music around impassioned vocals, sing-along choruses, and deeply heartfelt lyrics and they bring this all and more to their live performances.

Next February the Florida-based quintet are coming to the UK for a seven date tour, sharing the top spot with Pennsylvania pop-punks The Wonder Years. The tour will kick off at the O2 Academy in Glasgow on 16 February 2019 and continue as follows:

Discussing the bands returning to the UK bassist Jeremy Lenzo shares ‘We had such a great crowd response from our last tour in the U.K. that we began planning another trip as soon as we got back in the states. We started chatting with The Wonder Years about touring together because we thought that would make a great package and really bring a lot of high energy to the show. We have never toured together before, but it has been something we wanted to do for a while, so we were happy they were on board with the idea. Now we can finally announce our U.K. tour together this spring. It’s something we are really excited about and looking forward too.”

Tickets are on sale now at the usual ticket retailers including Gigs and Tours.