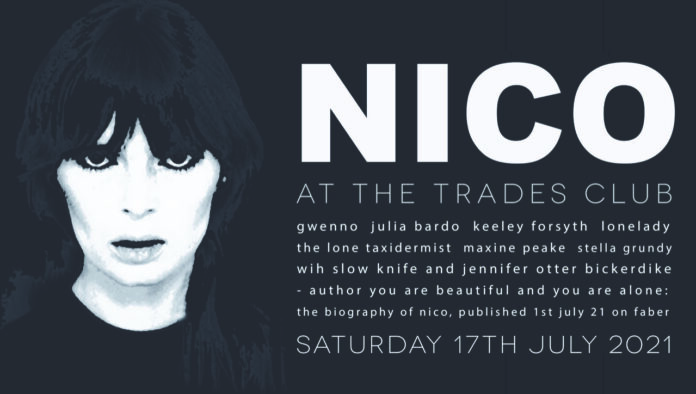 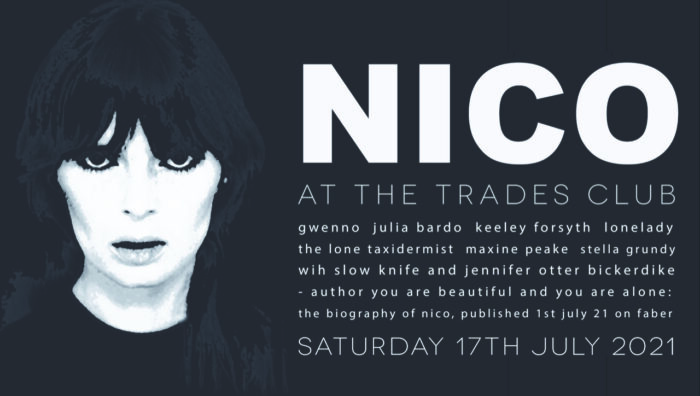 TV star Maxine Peake joins an all star line up for a one day event at Hebden Bridge Trades Club celebrating the life of Velvet Underground singer Nico who played a legendary gig at the club.

The German singer was installed by Andy Warhol as the chanteuse for the Velvet Underground contributing distinctive vocals to three of the songs on their classic 1967 debut album. She went onto a successful solo career, including a gig at the Trades in 1984, which is still talked about in the town.

“Nico played the Trades Club in the mid-80s just before she passed away in 1988 so there has always been a connection there,” says Trades Club promoter Mal Campbell.  “She’s one of my favourite artists and I’ve seen her increasingly cited as an influence over the years.”

“I’ve had it in my mind to hold a Nico festival at the club for years now, and the lockdown meant I had time to put it together. At the same time, I heard that a new Nico biography was coming from Dr Jennifer Otter Bickerdike, and that sealed the deal.”

The celebration on Saturday 17 July kicks off with an afternoon book event where Dr Bickerdike will discuss her biography, You Are Beautiful and You Are Alone: The Biography of Nico, in conversation with special guests.

“I am absolutely thrilled to be invited to share my four years of research, writing and hard graft with others at the Trades,” notes Jennifer Otter Bickerdike. “Nico was a spectacularly underrated and often misunderstood artist. I cannot wait to set the record straight on what a true trail blazer she was with this defining biography.”

Heavenly Recordings artist Gwenno has played two sold out gigs at the Trades and she is joined by on the bill by Oldham actress and musician Keeley Forsyth. Multi-instrumentalist Lonelady is another Trades veteran, and former Intastella singer Stella Grundy wrote and starred in Nico Icon as her tribute to a great artist.

Julia Bardo played two gig at the Trades as a member of Working Men’s Club before going solo in 2019, and the house band for the night will be Manchester’s Slow Knife.

Tickets are now from www.thetradesclub.com