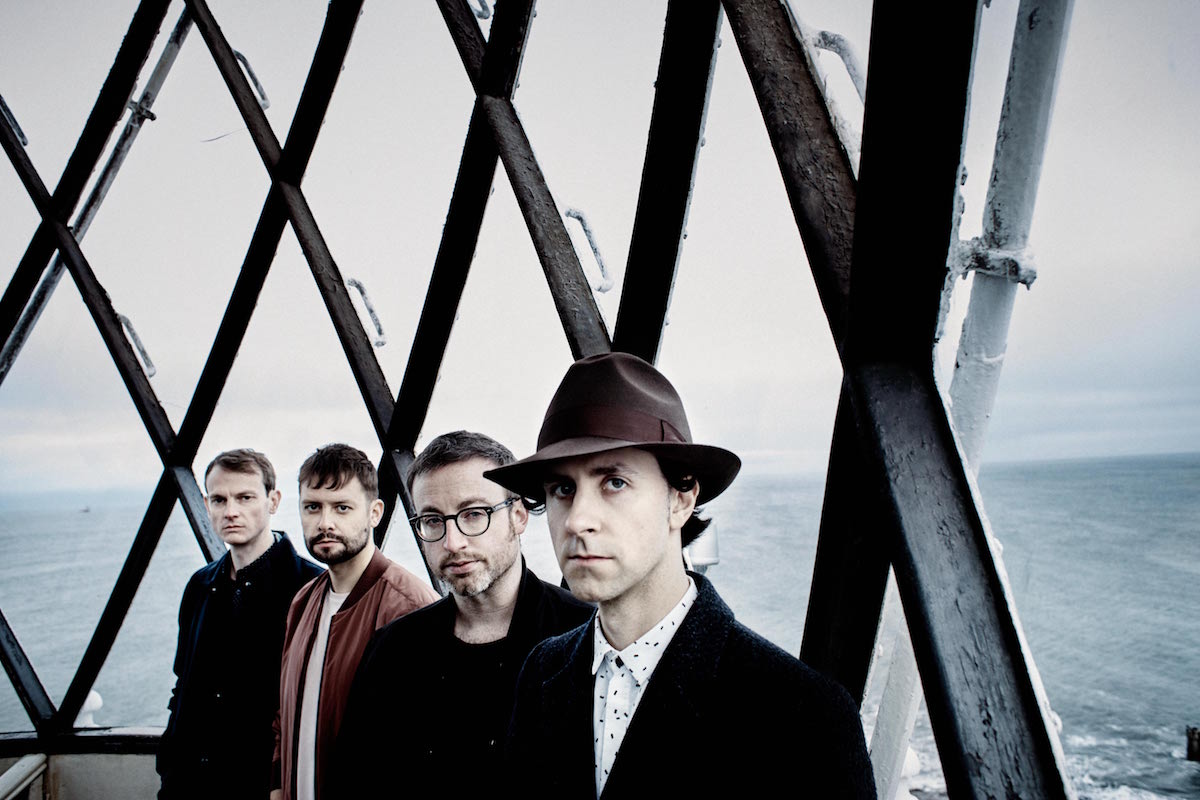 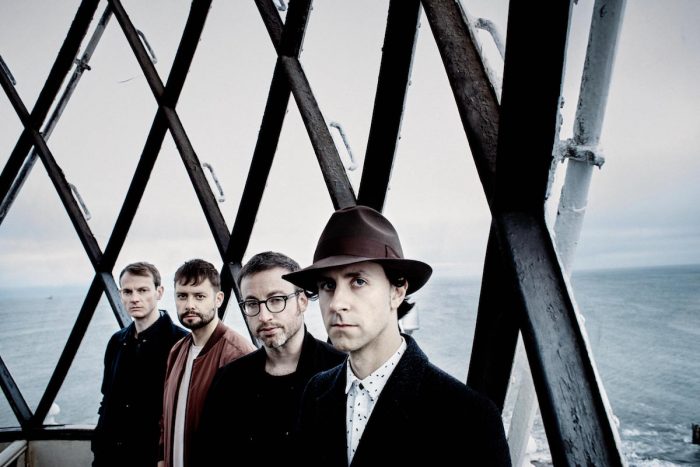 In advance of the release of Risk To Exist we talk to Paul and Lukas from Maximo Park.

As Maximo Park gear up to release their sixth studio album, we catch up with Lukas and Paul from the band to talk all about recording at Wilco’s studio and having Mimi from Low providing vocals on some of the tracks. As well as digging deeper into the meanings and feelings behind some of the new tracks.

Its safe to say the band have already begun to awaken some of the country’s troglodytes with their views on the current refugee crisis, rightfully so though as the band aren’t willing to shy away from the troubles that the country and beyond face. In the past these references have been there, but on Risk To Exist Maximo Park are at their most prominent.

Its safe to say that 2016 wasn’t the greatest year for most people, how did that change your approach to Risk To Exist? Was there a willingness to leave your comfort zone?

Lukas Wooller: We’ve approached every album like it’s our last, right from the start. The music industry has always been fickle and we’ve seen and read enough about it to know that being able to make music as a living is not a job for life. So we try different things on every album, because we don’t want to have any regrets. This drive is balanced by the fact that we are four different people with differing ideas and so to get us all on the same page means not doing anything wildly radically that would alienate some of the band. And so I think we’ve progressed over the years in a natural way. When we came to writing this record we had a number of internal desires like making funkier, danceable music based around the drums and bass while keeping guitar and keyboard lines simple. It was the first album we’ve recorded with Paul Rafferty who has been our bass player since 2012 and with his playing style we felt we could do something we’ve never felt comfortable doing before which is to groove.

How was it working with Tom Schick in Wilco’s studio?

Lukas Wooller: Recording there was an incredible experience. In some ways it is a very simple studio. It’s a huge, open-plan rectangular room with the recording taking place along one of the short sides – drums in one corner with some soundproofing, the desk in the other corner with only a bookcase separating it from the live space where the band set up in between the two corners. It was completely against the expensive studio ethos we’ve sometimes come across. However, what makes the Wilco studio so special are two things. The first is the amount of gear available to the recording artist – the rest of the room is crammed with any kind of instrument a rock band might need: vintage guitars of every era; bookshelves of pedals; snares piled to the ceiling; keyboards that look like they’ve fallen off a passing space ship. It was overwhelming. The second thing is the people that run the studio. Mark the studio manager knows every bit of kit inside out and makes sure everything is working, and Tom, who engineered and co-produced the record, knows exactly how to make the recording process run quickly and make everything sound great. We entered the studio from the UK having brought no instruments of our own and in 45 minutes we were playing what became the first song on the record. We recorded two songs in the first day. The studio is a well oiled recording machine!

How did the change in environment influence or change the songs in any way?

Lukas Wooller: We wrote the album with the aim to record it live. We wrote the new songs with more space and to not rely on having extra parts in the mix, and we rehearsed them a lot before we went to make the final recordings. We really wanted to document our live playing – it’s something we don’t feel has come across in our albums to date. So we chose The Loft, Wilco’s studio, because that was what it is renowned for. We recorded this album more quickly than any of our others. Being in the US 2 weeks before the election assured us that the songs were relevant outside the UK. We worked with some local brass players, and they really connected with the lyrics and were commenting on how pertinent they were to their own experience at that time.

How did working with Mimi from Low come about? Are there any plans to re-create her input live?

Lukas Wooller: We’ve been huge Low fans for years – the way Mimi and Alan harmonise together means Low have a very distinct sound that we love. We had written backing vocal ideas with a female voice in mind. When we booked the Chicago studio, we knew that Mimi had recorded at the Wilco studio before. We asked the question and the answer came back yes! We were very excited and hearing her voice harmonising to our songs was a day of recording we’ll never forget.

There are a number of strong political references throughout the album, was it a conscious decision to make these more explicit?

Lukas Wooller: Political themes have always been part of our lyrics. Songs like Girls Who Play Guitars, Our Velocity and The National Health have lyrical nods to the way society limits people. As a band we’ve been concerned for a while with the changing mood of the country as right-wing views become more prevalent. Having said that, we didn’t make a conscious decision to sit down and write a politically explicit album, it happened spontaneously. When the first few demos appeared with overt references to things like government and immigrants, we had to take a moment to ask ourselves if we wanted to continue down this route. We always aim to write direct, emotionally driven, effecting pop songs and we are aware that when politics become a significant ingredient of pop music then it’s very hard to strike a balance between social comment and personal emotion, in a way that doesn’t weigh the song down. But it felt the right thing to try and do – to try and find a way to mix political observations with matters of the heart in a way that would not exclude anyone. Even if a listener might not agree with some of the thoughts expressed, we hope there is enough in the songs that touches them and makes them think and feel a little bit differently about their world – which has always been our aim all along anyway.

Both The Hero and What Did We Do To You To Deserve This? are perfect examples of this, they resonate themes from last years Brexit vote, what was the thought process behind these songs?

Paul Smith: With ‘What Did We Do…’, I was inspired by the banking crisis and how quickly things had settled back into ‘business as usual’ for the elite that caused the economic downturn. I didn’t want to mention banks explicitly though, and although there are references to auditors, the net was cast wider to include working class themes in the second verse. I had read the Owen Jones book, ‘The Establishment’ and it reinforced a lot of my own views with facts, so I felt I was on firm ground talking about inequality in a song (and across the album).

With The Hero, I recognised a historical parallel between the current debate on immigration and the story of migration from Italy’s poor, rural South to its industrial North in Visconti’s 1960 neo-realist film, ‘Rocco & His Brothers’. It struck me that the nostalgia for home that the family has is a common one for migrants despite the economic or political situation that caused them to flee. This conflicted feeling that displacement brings is often ignored, while negative stereotypes are encouraged by right-wing commentators. The chorus hints that life is not as simple as we are told it is in a starkly polarised media environment, and that although compromise is essential in life, we should also stand up for our beliefs.

As a musician do you feel you have a responsibility to reflect on political and social upheaval and the chaos that currently exists? Similarly, are you going to be working more with charities like MOAS in the future?

Lukas Wooller: It’s not a responsibility as such – an artist should be free to express whatever they wish – but we do feel that good art should engage with the world around it. We also believe, like Thomas Mann, that everything is political. If you’re creating art then in some way it will reflect the world in which was made.

The song Risk To Exist was inspired specifically by the work of MOAS and so to work with them felt right and made a lot of sense for both of us – it was an honour to bring more attention to the important work they do. We are always open to engaging with charities when it feels like a good match – ultimately we want to help, not capitalise on a promotion opportunity.

Do you think the political references may divide opinion of fans?

Lukas Wooller: I honestly don’t know. I accept that some people want to listen to music as a form of escape and that they might find some of the new lyrics jarring. But we’ve really tried hard to keep the songs ‘pop’ and emotional and open enough that people can find their own meanings. Whether we’ve succeeded or not only time will tell!

With the current touring cycle of an album being some eighteen months, how do you think these tracks will feel after that? Do you think they’ll retain their poignancy?

Lukas Wooller: Whenever we write, we work hard, lyrically and musically to craft songs that will stand up years from now. We’re still here after 16 years, making our 6th album, so it seems that we’re succeeding in that aim to some extent.

Risk To Exist is a highly charged album in many ways, is this likely to affect your setlist choices for your upcoming tour? Are we going to see an even more energetic Maximo Park?

Lukas Wooller: Lyrically the songs are more angry and pointed than before, but musically we’ve written grooves that are slower than people might be used to hearing from us – there is more space in the music, it’s more sparse with the drums and bass doing the work. So I anticipate an even more varied set than ever before. We’ll always have energetic eruptions in our sets with songs like Our Velocity or The National Health, and now we can contrast that with songs like What Did We Do To You To Deserve This? and Work And Then Wait. To be honest, we’re not young men any more – we need the odd breather now and then!