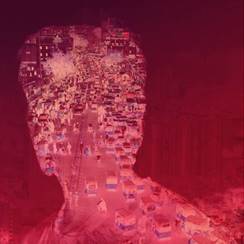 Max Richter uses the Universal Declaration of Human Rights and real voices from across the planet to remind us we need more than ever to become one global family.

There’s not many albums that start with a long dead First Lady reading the preamble to the Universal Declaration of Human Rights, but that scratchy recording of Eleanor Roosevelt still hits a nerve.

Over the last decade Max Richter has quietly pulled together this complex and moving piece using chunks of that ground breaking document created in 1948 after the horrors of the Second World War, alongside 70 crowd sourced voices from around the world set to this trademark arpeggios, drones and strings with a soprano Grace Davidson added to the mix.

Not content with that epic challenge he then scored Voices for a unique ‘upside down’ orchestra of 12 double basses, 24 cellos, 6 violas,8 violins and a harp, so the bass instruments lead, which really gives the whole piece depth and resonance.

Actor Kiki Layne, from If Beale Street Could Talk, reads pieces of the declaration as Richter uses mini movements to create different moods around different parts of the declaration. Journey uses birdsong and drones fighting against the declaration read in different languages forcing the listener to think what does the right to freedom of movement actually mean when an orange lunatic wants to build a pointless wall.

Choral adds voices from the Middle East swirling round Richter’s huge strings, and stabbed notes, to make the point that if we actually adopted the declaration, we might not be in the mess we are in as children drown in the Mediterranean fleeing oppression.

Louder Than War is a site that is founded on the declaration’s commitment to freedom of thought and expression, but the bleak drones of Murmuration is a reminder that for millions of our fellows human that is a right denied to them. As Layne intones, ‘the will of the people shall be the basis of the authority of government’, your thoughts are drawn back to thinking about how true is that in our own nation?

Many of the 25 tracks on Voices are short, but when pieces like Little Requiems – Pt. 2 go longer, as Davison sings pure notes over incredibly lush strings, it is hopeful, sad, optimistic and troubling. A bit like the human experience in many ways.

Richter rounds off with the meditative Mercy, which has echoes of his billion-streaming classic Sleep, offering a strangely hopeful call to arms to force our masters to adopt the declaration, which is really only common sense.

As our planet continues to burn Max Richter has created a moving and at times beautiful album where every time you listen you hear, or feel, something new about what it is to be a fully paid up member of the human race.