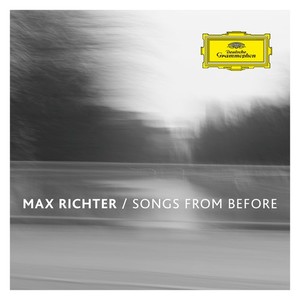 Max Richter: Songs From Before

Originally released in 2006 and now re-mastered and re-released on heavyweight vinyl LP plus CD, ‘Songs From Before’ is the follow up to 2004’s landmark ‘The Blue Notebook’. Simon Tucker reviews:

German born and educated in Britain, Max Richter is rightly hailed as one of the finest composers out there. Following last years Sleep/From Sleep (our review of which can be found here ) Deutsche Grammophon are now reissuing a re-mastered version of one of Richter’s most celebrated works.

Listening to Songs From Before can be a devastating experience. It is unflinching in its intimacy and transports the listening from sun-drenched gardens to the vast and oppressive atmosphere of space. Whilst the album is in large instrumental its narrative is clear and concise aided by the soothing tones of Robert Wyatt who punctuates the album with readings from text by Japanese author Haruki Murakai. This is is a vital ingredient in the understanding of the album as it helps create a tone of isolation and alienation whilst simultaneously making the listener feel protected and guided by a trustful hand.

Throughout the pieces gathered here a lot of the music is played in the distance never quite in the same room as where we are located, however, instrumentation always appears just at the right time connecting us to this distant beauty. The strings that appear on opening track Song connect our hands to those of the musicians playing a repeated a motif in the blurry section of our vision.

Flowers for Yulia is the first time Wyatt appears and he sets the tone for what is a heart-wrenching trip with strings as the hiss and static of modern life buzz around and distant shadows try to make their voices heard yet always remain out of focus and indecipherable.

The brief Fragment is a piano lament whilst Harmonium send the listener swirling as its cyclical nature gently persuades us to enter the void. Once in, we now approach the most emotional moment on the entire album as Ionosphere places us onto the grass, sun blazing and bird song fluttering. In the distance, coming out of a window you hear a string section playing. You’d give anything to be in that room but you are far to absorbed in your surroundings to make even a muscle twitch.

Not all of the album plays just out of reach as pieces like Sunlight, Autumn Music 1 and 2 (the second of which rolls over you creating black and white images of working-class areas. Full of hope, beauty and pride which those who don’t have much always manage to have).

We do leave the planet on occasions. Specifically on Time Passing and Verses which transport us out of the atmosphere, cold, isolated missing home.

Songs From Before has the power to break your heart yet feel grateful for the experience. It is imbibed with ancient philospohies and emotions we have been trying to understand since we transformed from ape. A truly wonderful work that is powerful, emotional, glorious and seductive. A must listen.