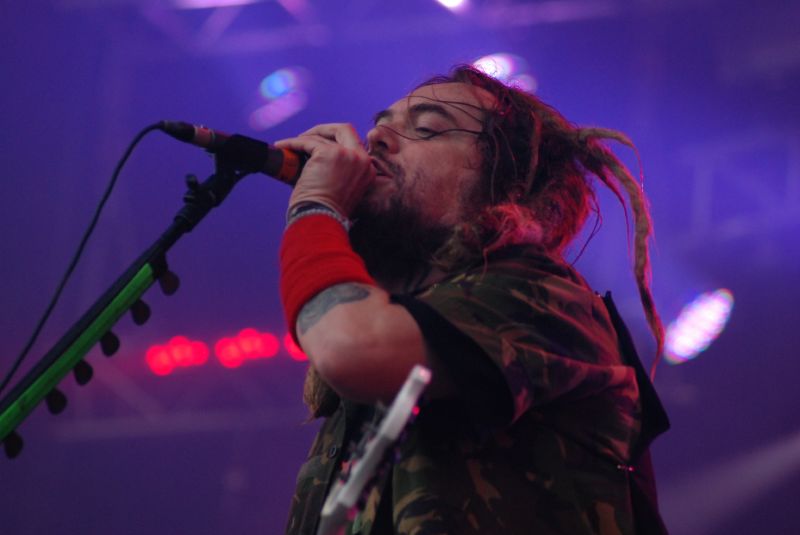 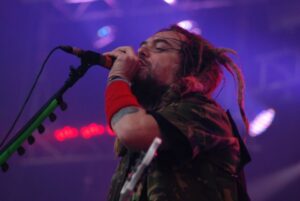 This ‘lost & recently found’ interview with Metal’s favourite Brazilian, Max Cavalera (Sepultura/Soulfly/Cavalera Conspiracy) is from March 2014 when his band Soulfly were in Bristol to play the Fleece as a part of their European Tour. It was conducted by my brother, Tim because I was unable to due to work responsibilities. Ever the gentleman, he brought with him some delights from Wales for Max.

The Welsh cakes and Gower beer went down a treat apparently. The interview took place on their tour bus, the afternoon of the gig. Here’s is the full interview. Mwynhau! (Enjoy!)

A lot of your albums contain added eclectic musical interludes between the tracks, Do you work on these alone or do collaborate with others on these?

Cavalera: I work with a guy, he’s very, very good. He worked on the Halo games, the military science fiction first-person shooter video game franchise, and I record with Terry Date, the American record producer and it was his assistant engineer, Fred.

I hang out with Fred and he was telling me about all these sounds. I said, “play me some!” and it was all this cool electronic stuff. I thought it would be cool at the end of every song if we have some kind of noise, bubbling going on, so we created all that together. Some of it was taken from You Tube actually. The end of, ‘Ayatolla of Rock ‘n’ Rolla’ on Soulfly’s ‘Savages’ album. The trumpets are Tibetan Monastery trumpets and the drums are African, taken right out of You Tube.

We did the intro for ‘Bloodshed’ with a nuclear reactor sound. It’s fun creating stuff like that. My mission with Soulfly is something I started with the fifth album, ‘Dark Ages’ which is making the bulk of the recorded music in America, then travel around the world and collect sounds, adding them on top of the album. ‘Dark Ages’ had a bunk of stuff from Serbia, Russia, Egypt & Turkey, and it was a very cool record because of that. I want to do more that.

It’s what makes you particularly stand out. We get a little taste of who you are as a person with these magical additions.

Cavalera: Right, Otherwise your just gonna be another metal band. I want to do more. The next Soulfly record, I am going to really try to get back to that.

Do you have a traveling recording studio?

Cavalera: No I don’t. I just use my ipod, It’s easy. I used to travel around with a DAT machine but these days you don’t need it. The quality is so good on these digital things. You don’t really need much. The Egyptian stuff on ‘Dark Ages’ is a band playing in a boat on the Nile river, I recorded with a video camera and I thought it was fuckin’ awesome.

You don’t seem to let technology get in the way of what you want to do, you just get things done.

Cavalera: We got to use technology you know, I am against people who say, “you shouldn’t use pedals”…Why? Pedals are a great invention. That’s why I like Edge from U2, he uses a lot of pedals. Some people are purists and it’s bullshit.

Cavalera: It’s best of the three. I did something with Igor (Max’s brother and drummer with CC) that we have never done before. We got into a mission like state of mind of making a very conscious record where everything is ‘fast’, and I’ve never done that before. It was kind of hard because Igor kept going into the groove, and I kept pulling him out of the groove. No groove, fast! And we got the next song, fast again. It’s not quiet Grindcore, it’s still very much CC. The songs aren’t thirty seconds, Napalm Death songs but they do feel much more ‘Metal’ than ever before.

The topics change because CC is very wild. There’s songs about Barbarians, Japanese fighter pilots. There’s a song about the Salem witches called, ‘The Crucible’, Nate Newton from Converge plays bass on that. I love Converge, one of my new favourite bands, and it was really cool having him involved in the project.

Your lucky, So people jump at the chance to work with you.

Cavalera: The Soulfly ‘Savages’ record featured Neil Fallon on vocals. I love Clutch. The mix of metal and that southern voice is so exciting. I love these collaborations, I’ve been doing them since the Sepultura days. I never get tired of them and you get to see a different side of the musician. You’ve never really heard Neil in a song like that before because Clutch are much more rock and roll.

Did you get on with Mike Patton when you worked with him?

Cavalera: Yeah, I’ve even got him in my book and he’s got some great stories, because he doesn’t do a lot of interviews. He told me he’s never gonna write a book. Mike is an enigma.

Did you enjoy the process of writing your biography, ‘My Bloody Roots’?

Cavalera: Yeah it was great. There was a couple of things that were tricky of how to say it because you can get sued. (As of today 11/11/15, Max has been ordered to pay $13,000 damages to Igor’s former x-wife for calling her a “bitch” in the book)

I took it easy on the Sepultura guys. It’s not a hateful book, I don’t hate them. I am very proud of what we did together, we did some great stuff together. We grew up together, we  were friends, so I don’t have that bitterness in me. Even when I see Andreas (Kisser, Sepultura’s guitarist) talking crap about me, I still don’t get really mad, I just kinda laugh. I don’t know why he does it…whatever. I prefer to remember the good times and that’s what the book is for. This book shows what a good time we had in that band and it was great, and I’m having a good time with Soulfly and it’s all in there.