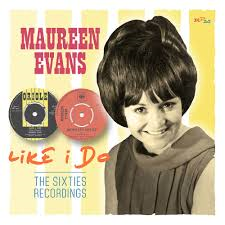 First retrospective CD compilation of the 1960s recordings by Welsh singer Maureen Evans featuring all her released material for Oriole and CBS, including five Top 40 hits….Ian Canty explores the netherworld between Swinging London and cabaret at the Talk Of The Town….

The big-name female singers of the sixties were often only identified by their first names…..Dusty…..Cilla….Sandie….and Maureen? Though reckoning myself as something of a 60s buff, I have to admit that the name was not at all familiar to me. But the facts are that Cardiff’s own Maureen Evans racked up a fair few hits in the early years of that decade and continued to record singles prolifically right up until 1968, when family responsibilities meant she ended this stage of her career.

Born in 1940, Maureen Evans had the kind of full voice that was somewhat akin to Petula Clark with a little of Eartha Kitt’s sultriness thrown in. A bit of child prodigy, she got her start in the entertainment world by cutting a version of “Tennessee Waltz” at the age of 10, a private recording financed by a benevolent aunt. She made her official debut though in 1958 with a version of “Stupid Cupid” and had her biggest hit four years later in 1962 with “Like I Do” which had a similar meter to Allen Sherman’s joke record “Hello Muddah, Hello Father” (which it pre-dated). When the Beatles unprecedented success took a tight hold on the Pop scene she found herself on the wrong side of the Beat explosion and although she gamely battled on it was very much an uphill struggle after 1963 drew to a close (she managed one more chart record with “I Love How You Love Me” which got to number 34 the following year).

This comp dots all over the place with no respect for chronology and Maureen’s battle for some sort of defining image is lost as a result. But no fear as there is a lot of appealing stabs at various styles, including the Country tinges of “Paper Roses” (probably better known to most through Marie Osmond’s version a decade later) and what was later to go on to become a Northern Soul fav “Never Let Him Go”. Though never threatening the kind of extraordinary Mod-Psych-Soul ala Sharon Tandy, the likes of the quite beautiful “Searching From Home” was a brilliant showcase for that voice, some lovely guitar underpinning this plaintive ballad and also taking it a bit away from MOR too into the bargain.

It has to be said though that it isn’t that difficult to see why many of these singles missed out on the chart – there simply isn’t that much to set them apart from the works of similar artists of the time and as the 60s wore on Maureen clearly was a world away from the “happening sound”. Though the songs are all well played, sung and arranged they must have seemed pretty old fashioned back then and more fitting for the supper club circuit than the Ricky-Tick.

Though there is a lot of very nice (but not quite outstanding) 60s pop on here which of course will appeal to fans of that genre, what really makes this collection stand out are the sleeve notes. Not written by a well-informed expert as is usually the case but the artist herself, it is a fascinating glimpse into a world which bisected the beat with light-entertainment. Regardless of what “the cool” may think, this is as valid a portrait of the decade as any and is written with a light and knowing touch, a vision of a faraway planet where summer seasons with Morecombe and Wise (unfortunately Maureen couldn’t make this prestige engagement as she had to look after her new-born baby) have as much import as the Pop Charts. I really enjoyed reading her story here, it was informative and refreshing in its unpretentious modesty.

Maureen Evans may not have had the staying power of the Queens of UK pop, but she more than held her own with the heavyweights for a while at least. This is the first collection of her material officially released and a much deserved reward for some sterling work during the sixties which has otherwise been overlooked. She had a tale worthy of being heard and told, finally it is here.