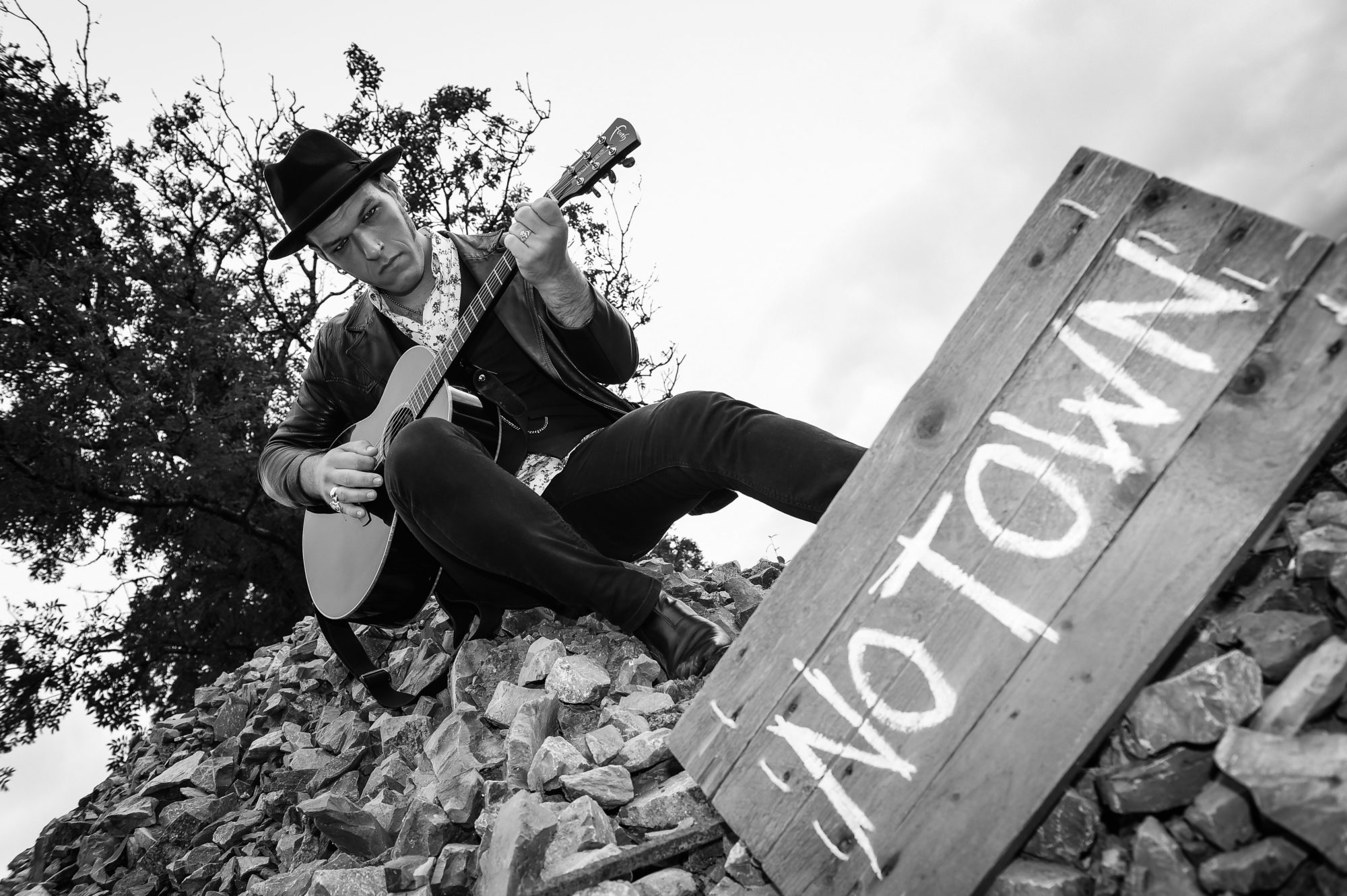 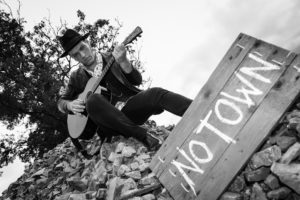 ‘The Road To No Town’

Supremely talented Northern Irish musician Matty James owns a distinct directness and clarity to his singer-song writing style as his new album ‘Road To No Town’, due to be co-released on the 29th of this month on Pirate Heart & Cargo Records takes you on a vibrant rabble-rousing journey of feisty, yet unfeigned expression.

Mattie’s lyrical flow spills effortlessly out into vivid stories about raucous roving vagabonds; turbulent emotions towards love, & the complexities of self. Each song manages to paint illuminated imagery to stimulate the mind’s eye and pluck the heart strings of the romantic right through to the resilient, all of which is wrapped around compact instrumentation delivering a wholesome outpouring of Rouge Folk, boisterous Rock n’ Roll and an alternative take on Country.

Matty is without doubt a poet and is one of the most down to earth characters you could ever wish to meet, his kind hearted sincerity can be felt through his singing tone. When I absorb his songs live, or from any of his discography I always settle upon the conclusion that as well as his up front spirited display of expression there is a large aspect of him that unknowingly projects a surge of underlying emotion & it is this natural release that is highly engaging and fascinating to tap into as it pours out so purely from Mattie’s all round performances.

Being an independent artist he is continuously out on the road touring and has currently announced dates on his website which lead him right through until August where he plays Blackpool’s Rebellion Festival; a thriving, alternative punk-rock festival, well suited to Mattie which hosts a humongous array of acts over the duration of four days.

Obviously expect more from Matty after those dates as he continuously dedicates a tremendous amount of time towards his fans and injects a colossal amount of effort into the progression of his creative projects. He is currently in the process of making a new music video for a track off the album which is due to be released Monday 4th. ‘Road To No Town’ will be his third studio endeavour, evidently demonstrating his flourishing skills as a musician as he takes to the production of the album as well as turning his hand to most of the instrumentation. The Legendary Pat McManus contributes his virtuoso fiddle playing on opening track ‘Road To No Town’, track five ‘Win or Lose’, track six ‘Gunpowder’ & track ten, ‘Cut with Dust.’ Enhancing the Celtic atmosphere & embossing the Irish music roots into the heart of the recording.

Opening track “The Road To No Town” holds a burst of infectious energy that could even encourage a teetotal to crack open a fresh bottle of whiskey and down it. This rousing track sings of roving rabble-rousers and general bar room frolics, it’s incredibly catchy and will have you singing along within moments, as its chorus so easy to latch onto, there is an uplifting combination of both fiddle and electric guitar at points in the track that really grabs my liking and with it’s overall sea shanty feel it’s impossible not to fall hook line & sinker into. Track two ‘Sticks and Stones’ is a very clean, evenly spaced production that holds a wonderful sing along chorus and interesting play between electric guitar and harmonica. This track makes me feel good and the lyrics are empowering as Matty sings about being a free spirit & owning the ability to not become bombarded or bogged down by the politics of any one place, Stick and Stones is accompanied by a superb music video to be found on the following link. https://www.youtube.com/watch?v=UHDtY-a0REg Track Three ‘Heavy Heart’ is a gorgeous hopeful track about being down on your luck, he sings about the importance of seeking a strength in yourself to keep on going in life and face your days with fresh perspective. A beautiful sentiment that is good natured and comforting to home into. There are lovely backing vocals with a sublime electric guitar solo which I could fall into forever.

Moving onto song four ‘Oh My Darling’ presents a superb Rock n’ Rock track that careers fast into the combination of acoustic guitar, Mattie’s vocals, bass & electric guitar. I have to say I am fully fledged in love with the smooth tone of the electric as it supports that rockabilly sound, in many ways it sits on a complimentary tone to the fiddle whenever it appears at various occasions throughout the album. The song is tremendously upbeat however the lyrics sing about the turbulent emotions of falling in and out of love with a person. Track five ‘Win Or Lose’ owns an American style country esque vibe which radiates that sort of sentiment where you drown your sorrows in a whisky glass. Lyrically Mattie sings of the complex emotions of self, nursing regrets and waiting in vain as well as a playful confusion between lust and love. I mean, when else does a person make the most profound sense? When they are drunk of course! Pat plays a rich beautiful melody on his fiddle and the small intricate guitar parts that are strewn in-between makes it feel like it’s one of the more instrumentally complex songs on the album. Hurtling forward into track six ‘Gunpowder’ triggers the feeling in me that this song encapsulates the essence of the entire album; the high point; the heart and soul of it all, as it wholesomely rounds up all the factors that make Matty James shine in his musical expression. Pointing towards the rugged sea-shanty rouge, the good natured, upbeat spirit of life and the Celtic soul. The beautiful combination of fiddle and acoustic guitar tightly combined with layered vocals makes it a beefy, highly infectious extravaganza to burl the body around to.

Track seven ‘Money And The Devil’ reminds me of a suave creeping cat that’s on the prowl. This song holds an air of sophistication instrumentally with proud trumpet. It’s a very clean production and the beautiful touches of electric guitar, trumpet and acoustic is wholly satisfying as they are placed in all the most perfect of positions throughout the track. Matty sings of the cold hearted materialist type in this particular ditty. Track eight ‘Hold On’ projects itself as a gorgeous lyrically pensive song, which on absorption makes me feel melancholic, however overall on the surface level its instrumentally upbeat and full of hope. I really like this play with emotion, it makes it interesting as the lyrics and instrumentation stand as a unique entity onto themselves. The song sings about letting go of the past and accepting the moment you are in. Song nine ‘Dissatisfied’ kicks the whole party off again as this edgier Rock n’ Roll track hurtles itself at you like a lightning bolt. Its lyrics are compact in expression, as Matty sings of the many elements of life that create dissatisfaction within him; along with the rest of us mate! This track is highly infectious and liberating and owns a soaring climaxing quality, without doubt a superb roof raiser.

‘Cut with Dust’ sits as the final tack on this emotionally dynamic album, a slow two step ballad that instantly obtains your heart and reverberates its feeling into it. A beautiful melancholic song that owns a true celebration of strings from a stunning fiddle solo to textured acoustic that will have you swaying to and fro with a hankie in one hand and a loving friend on the other arm. Such a lovely way to end this very special album.

Matty James shall be holding two album launch parties the first being in, The George Tavern, London on the 29th of this month and then on the 30th in Retro Bar, Manchester, if you are near please do attend and catch his talents live and direct.