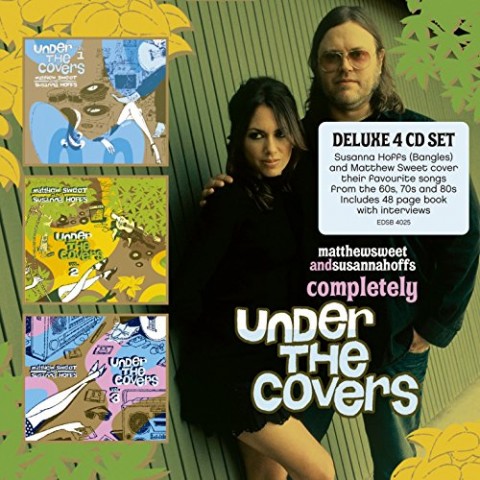 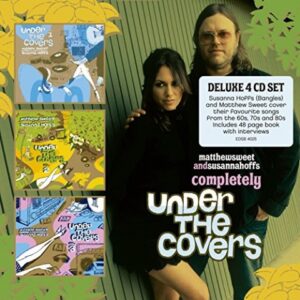 Completely Under The Covers (Edsel Records)

Two Power-Pop luminaries team up to cover their favourite songs. All the volumes have now been neatly compiled by Edsel Records. Louder Than War’s Craig Chaligne reviews.

What was supposed to be a straight ahead collaboration on a Susanna Hoffs solo album between two of the most celebrated artists from the Los Angeles power pop scene ended up in the end with a trilogy of records not too far removed from a modern equivalent of the Nuggets compilations. Hoffs’s relatively high profile as lead singer of The Bangles ensured that the series got an exposure that it probably wouldn’t have received with a lesser known singer and Sweet’s fantastic abilities as a an arranger, musician and singer ensured that the project would be of high standard. The purpose of Under the Covers is not about reinventing the songs but more about two music fans inhabiting their favourite recordings.

The first volume dedicated to the sixties was originally released in 2006 and shows a definite bias towards the second part of the decade with some songs more attached to the seventies (the two Neil Young covers :”Cinnamon Girl” and “Everybody Knows This Nowhere” and Linda Ronstadt’s “Different Drum”). The record starts on an original note with an excellent cover of The Marmalade’s “I see The Rain”, a song Jimi Hendrix rated very highly. An energetic version of The Beatles’s “And Your Bird Can Sing” proves that the song is definitely more than ” another one of my throwaways, fancy paper around an empty box” as author John Lennon once stated. A cover of Bob Dylan’s “It’s All Over Now Baby Blue” sports an arrangement based on a version by Doo-wop legend Dion DiMucci and Hoffs vocals work wonders on Fairport Convention’s “Who Knows Where the Time Goes”. The Los Angeles sixties pop scene gets it fare share of contestants with Love’s “Alone Again Or”, The Mama’s and the Papa’s “Monday Monday” and The Beach Boys’s “The Warmth of the Sun”. Greg Leisz’s pedal steel brings a new dimension to The Velvet’s Underground “Sunday Morning”. The recreation of the harmonies on The Zombies “Care of Cell 44″ is absolutely spot-on and Hoffs and Sweet’s voices blend in a very organic way on The Left Bank’s ” She May Call You Up Tonight”. The Kinks “Village Green Preservation Society” loses a bit of its magic with a bit too much electric guitars and drums that are too low in the mix.

For the second instalment in the series, Sweet and Hoffs seem to have gone into overdrive as this boxset adds a further 10 previously unreleased tracks to the original release. Starting with a take on The Grateful Dead’s “Sugar Magnolia” where Greg Leisz weaves his magic on pedal steel again, they then jump straight into power-pop territory with The Raspberries’s smash “Go All The Way”. Fleetwood Mac guitarist Lindsey Buckingham guests on his very own “Second Hand News”. A grungy version of the David Bowie penned “All The Young Dudes” precedes a cover of the Carly Simon women’s liberation anthem “You’re So Vain”. Matthew Sweet favourite “Here Comes My Girl” might miss Tom Petty’s vocal delivery and diction (something that can also be said of the version of John Lennon’s “Gimme Some Truth”) but it still is a good effort. Who would have guessed that we could get treated to a Yes track on here and one where Yes guitarist Steve Howe guests? Surprisingly its oddball status gives it an edge on more foreseeable entries. Todd Rundgren manages to get two his songs covered with both “Hello It’s Me” and “Couldn’t I Just Tell You” coming from his 1972 landmark LP “Something/Anything”. Big Star’s “Back Of a Car” sees Susanna and Matthew’s voices blend seamlessly. The country stylings of Little Feat’s  “Willin” provide the perfect setting for Susanna’s voice. Sweet also does a great job on George Harrison’s “Beware of Darkness” that features George Harrison’s own song Dhani on guitar. The bonus tracks are fine but you can see why they were dropped from the album, they either feature Sweet heavily (Marquee Moon) or Hoffs (You Can Close Your Eyes). However The Ramones’s “I Wanna Be Sedated” would have been a nice inclusion as the record is very centred around the first half of the decade.

On the third and final volume, our mighty duo cover their contemporaries as most of the songs were released when Susanna was enjoying her first flush of success with The Bangles and Matthew was writing songs for his first album “Inside”. A spirited rendition of REM’s “Sitting Still” opens the album followed by the Elvis Costello penned “Girls Talk” that was a hit for Dave Edmunds. The dB’s “Big Brown Eyes” just sums up what is good about power pop, 1 minutes and 54 seconds of pure catchiness. “Free Fallin” has never been one of Tom Petty’s songs, maybe a lesser known entry from his Full Moon Fever would have been more effective. Kirsty MacColl’s “They Don’t Know” sees Hoffs relish the opportunity to tackle a song she’s been wanted to cover since it was first released. Major highlight on the record is a cover of XTC’s excellent “Towers of London” that reminds us what a great songwriter Andy Partridge is. Lesser known entries like The English Beat’s “Save it For Later” or The Go Go’s “Our Lips are Sealed” provide the most enjoyable moments on this instalment.

More info on the Under The Covers project can be found at the Sid And Susie Facebook page.