Matteo Sedazzari – A Crafty Cigarette. Tales of A Teenage Mod 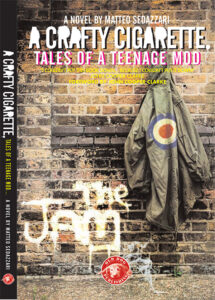 Jamie Havlin reviews a rites of passage novel about an aspiring young Mod growing up in Surrey suburbia during the late 70s and early 80s heyday of The Jam.

A Crafty Cigarette is a short novel which comes across as if it had been written by a fourteen year old.

This isn’t meant as an insult though. Actually, as the book is a celebration of the possibilities offered up to a schoolboy in small town suburbia and is told from his perspective, it’s a compliment.

Unlike many authors covering similar territory, who concentrate on precocious youngsters capable of using inventive metaphors, clever alliteration and other stylistic literary devices way beyond their years, Sedazzari really does inhabit the voice of his central character who I assume he shares much in common with.

The author also wisely ignores the all too common novelistic trait of making his main character self aware or effortlessly cool, so for example, in the days leading up to the Silver Jubilee celebrations, he admits that he has still to hear The Sex Pistols and has no real idea about the musical explosion sweeping the country.

‘My teacher, Mrs Roberts, told us about punk parties, where they make you drink urine, eat cakes filled with drugs, and after you’ve eaten them, you are a drug addict, just like the ones you see on the TV cop show, Kojak. I like Kojak as well.’

In his naivety, and much to the amusement of his classmates, he asks the teacher if she has ever attended any punk parties. At several points in the first half of the book, he makes naive statements about older boys ignoring him, completely unaware that they would just consider him a kid and an embarrassment to be seen talking or hanging around with.

Fond of high jinks and Hammer Horror, it isn’t too long before another passion enters his life. Hearing All Mod Cons by The Jam for the first time, he is inspired to become a Mod, although as a schoolboy with little money for records, clothes or concerts, the road to Mod credibility is a long one.

Along the way he encounters plenty of hassle from skinheads, teachers and a Dennis Waterman lookalike from a local boozer. He also discovers soul and the Small Faces, Carnaby Street and the Creation, Pop Art and the poetry of Paul Weller’s pal Dave Waller.

His infatuation with The Jam also leads to an amusing cameo from Bruce Foxton (which I won’t spoil for you) and a strange style decision after seeing a performance of Going Underground on a Top of the Pops, where Paul Weller somehow decided that wearing a Heinz Creamed Tomato soup apron was a good idea. He pesters his mum for the same apron.

She assumes he must need it for a Home Economics class.

Sedazzari captures brilliantly that time in youth when you and your friends are destined to write for NME, have their paintings displayed in all the top galleries, become a pop star or whatever else you put your mind to. He’s also alert the fact that it can be hard for a boy of that age to talk unselfconsciously about his girlfriend while finding it easy to discuss friends.

Some of the villains in the book do veer close to caricature, there’s Mr Bates, a royalist obsessed nutter; repressed skinhead Pemberton and a racist, bullying teacher nicknamed Chicken George, who seems to prefer donkeys to chickens but the pluses of the book easily outweigh the minuses, especially if the reader has ever been a mod themselves or belonged to any of the other tribes that flourished in Britain round about the time the novel is set.

A Crafty Cigarette ends with a riotus climax, reminiscent of Over the Edge (an American movie that you should seek out if you have never seen it) and like a good Paul Weller concert the novel leaves you wanting more.

I’ll be very interested in reading whatever Matteo Sedazzari writes next.