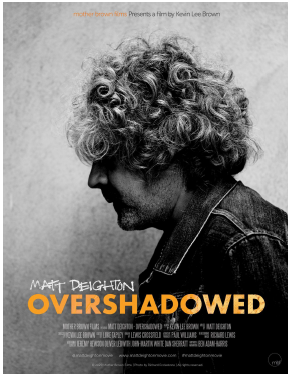 On May 14 2021 Sky Arts will air ‘Overshadowed’ alongside the first official digital hi-res release of a critically acclaimed, treasure trove lost catalogue belonging to one of the UK’s most criminally overlooked artists

Matt Deighton is one of the most respected and loved artists within the British music industry. Front man for 90’s acid jazz band ‘Mother Earth’, Paul Weller’s guitarist of choice and Noel Gallagher’s replacement in Oasis. But who is he? Critically acclaimed yet an underground secret. Is he the ‘British Sugar Man’? Who is Matt Deighton?

For the last 25 years Matt has collaborated with a multitude of British musical greats from Paul Weller to Chris Difford, Oasis to Beverley Martin, Mother Earth to Marti Pellow and fellow lost legend Bill Fay. He has shared line-ups with the likes of Davey Graham, Terry Reid, Dr John, Steve White, Damon Minchella and Mick Talbot.

His solo releases have the music press gasping for more, comparing him with the likes of Nick Drake & John Martyn. But still, he remains an obscure rumour amongst musicians and devoted fans, his rare vinyl releases serving as trophies to enthusiasts and critics alike. Why?

After the release of ‘Wake up the Moths’, his most critically acclaimed album to date, Matt disappeared again, as he had after You Are The Healer and The Common Good, this time for almost a decade. Crippled with self-doubt, his long-term battle with manic depression saw him turn in on himself, choosing to live in a state of self-isolation.

‘Overshadowed’ traces Matt’s remarkable journey from a youngster playing music at home, to joining Mother Earth and the years with Paul Weller and Oasis. It brings Matt’s story up to date through the recording of his latest solo album, ‘Doubtless Dauntless’, and his musical journey comes full circle with the reformed Mother Earth.

We get to understand how depression has been both Matt’s enemy and his muse; and how the perpetual fear of another dark day brings anxiety, but also often the seeds of material for his music.

With a soundtrack of Matt’s finest back catalogue, classic old footage from his music videos and unique personal archive, to interviews from some of Matt’s friends and collaborators including Chris Difford, Bill Fay (his only ever interview on film), Paul Weller, Marti Pellow, Steve White, Kathryn Williams, Linda Lewis, Carleen Anderson, Damon Minchella and Steve Nieve.

This documentary explores Matt’s significant contribution to the British music scene, yet it also reveals a man whose blistering internal sunlight, recognised by all who have worked with him, deserves the acclaim of us all.

To accompany the release of ‘Overshadowed’ Matt’s critically acclaimed back catalogue, including solo album ‘Wake Up The Moths’ is being re-released via not for profit label Karousel Buried Treasure and made available digitally for the first time in hi res.