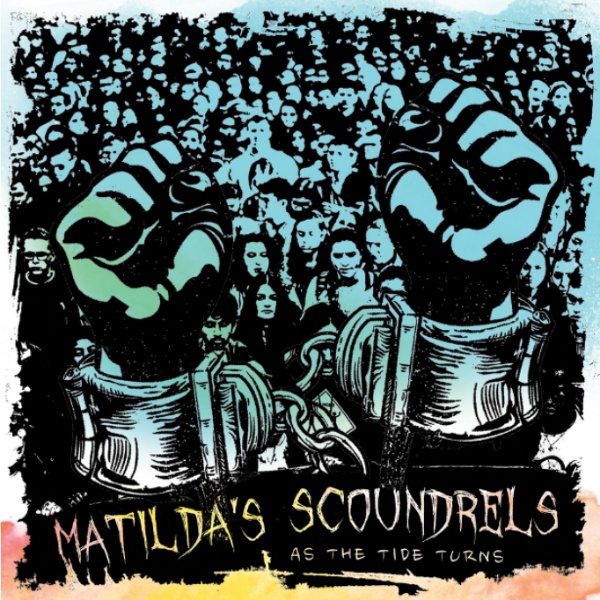 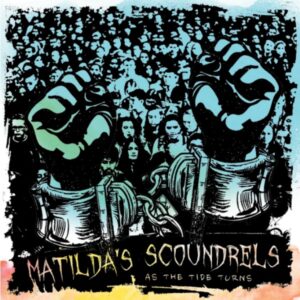 Out on 8th September

A 6-piece pirate crew of folk-punks from Hastings launch their debut album spreading sedition on the high streets and Louder Than War’s Nathan Brown is forced to walk the plank.

I’ve been lucky enough to catch the Matilda’s Scoundrels experience live as they have navigated up and down the ports and inlets of this septic isle.  A rabble of beards, hats, black clothing and studs armed to the teeth with accordion, mandolin, tin whistle, distorted electric guitars and pounding drums to threaten your ear drums, while the shouty choruses, frequent call-response and multiple gnarly vocal deliveries recreate an angry crew of pirates about to board your ship and steal all your booty.  Ahaaarrrghhh!

Forget the slickness of your Flogging Molly, Mahones, Dropkick Murphys or Levellers, this ship’s planks have rough edges and splinters that could take your leg off.  True, they have a touch of the Dropkicks and early Flogging Molly to their sound, and they have the recording quality you’d expect of the stars of the celtic punk/folk punk scene but their attitude is more street – in the real sense rather than a contrived image.  This is more in the vein of crusty aussie folk punks Mutiny, traveller-squatter folkers Tofu Love Frogs, activist folk-punks Kilnaboy and in the raucous spirit of the mighty Pogues, topped off with a hardcore punk guitar attack.   The accordion is, to my mind, what makes a band like this soar. It meanders up and down like the sea sickness inducing roll of the boat while the guitars and drums power ahead like the prow driving through the waves on full sail. The mandolin rings out through the smoke and noise. The occasional acoustic guitar and mandolin breaks provide a delicate calm, as if the sea is flat and the wind has dropped, before the maelstrom returns.

It’s not all rum addled debauchery (you have to wait until track 6 for The Rum Song) and rather than falling into the trap of being a pirate theme band, Matilda’s Scoundrels’ lyrics (how many plurals?!) take in socio-political issues. For example, “Shackles and Bones” may sound like a pirate tune but it’s about the USA prison system, and they have also been inspired by what they saw at the Jungle in Calais. The song titles alone read like a Victorian rabble’s political manifesto: Burn It Down! Take It To The Streets! These drunken hellraisers are not just pirates, they’re revolutionaries! “Rise and fight, morning strike, let’s kick down the door” they roar.

As the promo video clearly demonstrates, Matilda’s Scoundrels show their solidarity with refugees seeking a better life in the song, Bow to the Power:

Correspondingly the cover artwork brings together the power of protest and the prisons issue as if to say “Unite, rise up and break those chains”. Come on you ‘orrible rabble!

There’s variety on the theme. e.g “The Rum Song” switches between accordion/mandolin sea shanty and a simple guitar heavy tune that evokes glam, Sham and Oi! especially with its “hey hey hey hey” chant (“hey” being the folk punk equivalent of shouting “Oi!” as I’m sure you all know). “Friends of Mine” is the tin whistle’s chance to take centre stage with a haunting melody repeated throughout.  It’s a jolly upbeat number that takes its cue from the Pogues’ “Battle of Brisbane”. “War on Drugs” and “Godforsaken Sea” have something of a Romany sound to them, albeit with a huge guitar, which will appeal to fans of Gogol Bordello.

Matilda’s Scoundrels also understand the power of silence. Some bands are afraid of the gap, perhaps fearing that they will lose the listener’s attention. The trouble is, if you use too much filler then that’s what your songs become. For those with the guts, the counter intuitive trick of the drop out pays dividends. Less is more. The silence makes what follows it all the more powerful. And Matilda’s Scoundrels know how to create the calm before the storm.

All in all, 10 tracks that make you want to raise a tankard of grog and dance drunkenly down the high street en route to toppling the rich man’s system.  Available in a range of formats, the limited Vinyl edition is pressed up on Translucent Yellow and White and the first 25 pre-orders get a special mailer screen printed and spray painted by the band.
~
TNS Records releases can be found via Facebook  and bandcamp.