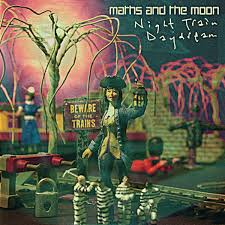 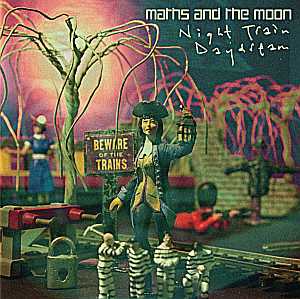 Experimental psych-kraut-post-rock prog for hipsters it may be, but surprisingly Maths & the Moon manage to impress Ged “If it aint-punk-it-aint-worth-a-fuck” Babey.

I have to be honest the name of the band really, really put me off listening to them … but here are the facts via the press release …

“Maths and the Moon are a three-piece alternative rock band from the South coast of England consisting of Andy Fielder, Luke Taplin and Matt Hirst. The band formed in 2009 and performed their live debut alongside legendary Can frontman Damo Suzuki the following year. Recorded and produced under their own steam in the isolated setting of the New Forest, Night Train Daydream was self-released in September 2013. Timezone Records (DE) are now re-releasing this fantastic album.”

Since the mid Eighties I ‘ve never really sought out bands who purport to be or who are referred to as experimental.

Sonic Youth for example I only liked in small doses. They always seemed to veer from genius to unlistenable self-indulgence. For me, music has to have an immediacy or some emotional pull or historical connection (yeah, usually with punk) to grab me. I miss out on quite a few bands I’d possibly like as a result, because I just don’t have the time (and mental energy) for repeated-listenings of stuff which is difficult / awkward/ uncompromising. Fugazi, The Cardiacs, Kate Bush, British Sea Power,  Swans (more recent stuff), These New Puritans (though I’ve got the first album) are examples of bands I ‘never got’, and I had the feeling that Maths & the Moon were destined to fall in with that ilk … but it didn’t take long for me to become fully immersed in their weird and wonderful world.  It was the ferocity and inventiveness of the rhythm section which hooked me initially before the shards & shades of guitar, the oblique & abstract words and the analogue bleeps and drones…

Night Train Daydream is probably a ‘concept album’ of sorts (another massive no-no in my punk rock book of rools.) But it has such a slippery uniqueness and jumpy immediacy that it doesn’t matter. No one song sounds the same as the next, like so many mainstream ‘n’ dull indie-bands. Some songs have blank-verse freeform lyrics, some don’t. They incorporate the chant, where a phrase is repeated ad-infinitum to create a rhythm made up of words.  There is a distinct Krautrock thing going on – probably via Stereolab and the like.  Gently droney, repetitiveness is balanced with massive durr-ing basslines that shake your spine. The pastoral psych side of Wire does appear like an apparition on a couple of occasions.

The lyrics seem to be unimportant but at the same time are clever and considered. A mix of open-heart confessional and word-association-football. They are sung and recited and kinda blank in the same way as Wire’s ‘text’ on their Harvest albums.

If this all sounds a bit modern progressive, there is still a pop side to keep the more casual listener interested. It’s Okay to be Afraid is a great pop-song.  Light at the 11th hour is a catchy bit of Bolan Grunge -the nearest to throwaway that MATM get. Dark Psych is a description which has cropped up in a few reviews and this review from Mintsouths Mike Spall pinpoints other apparent influences.

Some bands are just beyond categorisation and they achieve the perfect balance between cerebral experimentation and gut-instinct rock ‘n’ roll with a distinct identity of its own.  The last band which did this for me were the mighty, but under-appreciated Neils Children, whose mates / fans became the Horrors.

Maths and the Moon are strange and wonderful and have that kind of talent… to take their name as a guide, I would say, a Calculated Lunarcy.

You can find Maths and the Moon online at the following places: