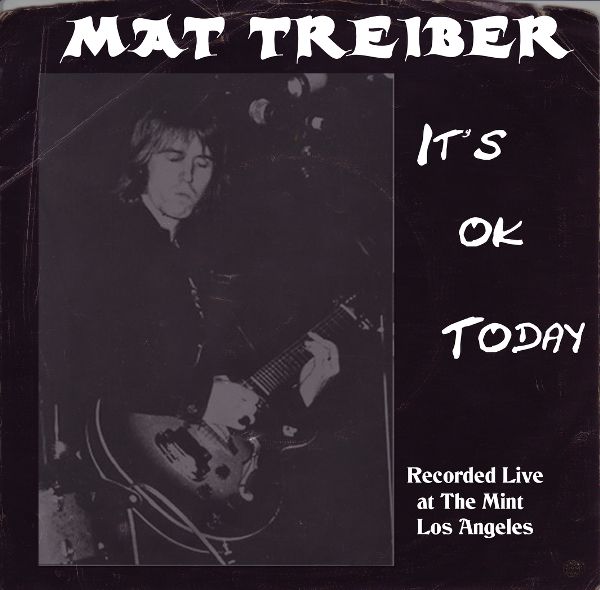 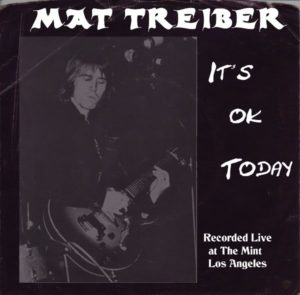 It is great being targeted by artists who want me to write about them….

But when it is a style of music which ‘aint my bag’ it’s a bit worrying….  what if I hate it?

I do like a wider variety of musics than I ever have before, now I’m knocking on a bit. But it has to have a certain ‘something’; an indefinable quality, which I can only define as being ‘true’ to itself.  “Communication of attitude, going in and out of rhyme” as Peter Perrett put it in ‘Shivers’.

Mat Treiber is an old-fashioned rock’n’roller.  His music sounds midway between the Beatles, the Stones and the Loaded-era Velvet Underground – with a bit of Gram Parsons thrown in for good measure.  This is not my kinda ‘shit’ generally speaking but there is a vague Perrettness about it and a Like-the-80’s never-happened vintage-authenticity about it.

And…. I do LOVE this single. Retro-modern, 7-inch black vinyl – recorded live –  Rock’n’roll maan, with a lackadaisical energy and effortlessly cool vibe and charm.

Mat Treiber is the Montreal-born singer/songwriter/guitar player who has brought his unique sound of old-school rock ‘n’ roll, with touches of pop and psychedelia to audiences in New York, Los Angeles, London and Stockholm. ‘Go All Around the World’ and ‘It’s OK Today’ are two songs that have been pulled from a full live album which Mat recorded at the legendary Mint club in LA. Treiber was introduced at this show by renowned singer/songwriter/lead guitar player Terry Reid.

See what I mean?   Any attempt to stick Mat into a pigeonhole: – pub-rock, powerpop, bar-band blues, country-rock, just serves to denigrate it.  This is just cool, natural rock’n’roll without any agenda, other than to entertain and make you ‘feel good’.

The other side is excellent too;

Go All Around the World’, is co-written by New York rocker wife Roxanne Fontana and is a whimsical story about someone down on his luck who dreams of a clown-like hero who saves him from his everyday monotony. Musically, the song recalls the Who, and features a distinctive slide guitar solo.

The only other release Mat has available is an EP entitled ‘The Hollywood Tapes’ (which features an outstanding Ike & Tina Turner cover song – ‘It Ain’t Right’) as well as another couple Treiber/Fontana compositions, one of which  got me hooked.  ‘Piece of Pie’ is sung from the point of view of a hungry frog.  “Now I never occurred to me that I could talk or sing or do anything, except to hop, until I bit into a piece of your pie…” A surreal work of rock’n’roll genius which should be on every jukebox all over the planet.  And up there with the only other rock’n’roll/frog crossover record; Clarence ‘Frogman’ Henrys ‘Aint Got No Home‘.

Self released and with his wife Roxanne, a cool artist in her own right, as PR machine, this is a taste of what the man can do and I’d love to hear the live set it’s culled from released as an album.  It’s only gonna happen if this sells, so have another listen and get out your cash.  It’s not anything new and ground-breaking but it is the wheel re-invented and attached to a cool little dune buggy of a record that will take you places where the sun is shining.

Buy the Go All Around The World / It’s OK Today  Vinyl from Here….  or Download here and here

The Hollywood Tapes is also available from here.

All words by Ged Babey except indented paragraphs from press release.