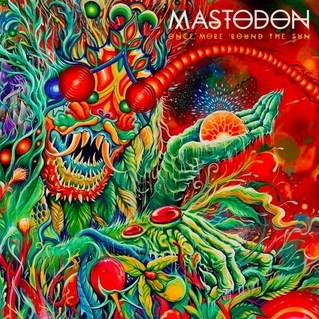 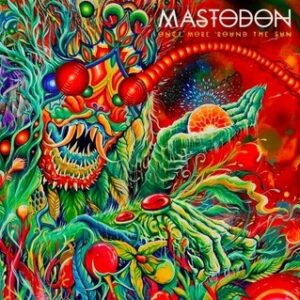 Mastodon – Once More ‘Round the Sun (Reprise Records)

Let’s play a word association game. What words come to mind when you think about Mastodon? Metal? Progressive? Sludge? Grindcore? Yes, yes, all good answers given their previous output. Indeed, in the past Mastodon have put out some astonishingly brutal records which marry up impassioned lyrics with a relentlessly aggressive and often complex musical style. However, ‘Once More ‘Round the Sun’ sees the band continue to develop their music from its post-hardcore origins, towards a more refined and direct offering.

Whilst it’s fair to say that the new territory being explored on ‘OMRTS’ isn’t much of a surprise (2011s offering ‘The Hunter’ provided its fair share of hints, songs such as ‘Curl of the Burl’ offering the biggest clues), it does mark a significant step towards a sound that nods to a range of more diverse influences from Black Sabbath to Alice in Chains, and perhaps most of all, one of Mastodon’s personal favourites, Thin Lizzy.

The album opens with a quartet of songs which act as a strong statement of intent from the band. Yes, the songs are heavy, of course they are, and the riffs continue to come thick and fast (this IS a Mastodon album after all), but the key difference here is that these songs are strongly driven by melody. On ‘This Time’, the band evoke Ozzy Osbourne’s early solo work and throw a chorus into the mix that you’ll be singing to yourself for the rest of the week. ‘High Road’ sees bass player Troy Sanders and guitarist Brett Hinds providing strong vocal harmonies to accompany the relentless guitar work, and the title track sees Hinds channelling his inner Phil Lynott on a track that wouldn’t be out of place on Thin Lizzy’s seminal ‘Live and Dangerous’ album.

By ‘Asleep in the Deep’, the band have taken things down a gear (which by anyone else’s standards, is still a very high gear indeed), and this allows us some time to appreciate the complexities that can be found in both the music and lyrics. There really is a lot going on with this record: modal, unconventional harmonies, complex dual guitar parts with licks being traded at a rate of knots, and rhythmic sensibilities that even Tool would be proud of. Mastodon have always displayed their excellent musicianship throughout their work, and it’s a pleasure to hear them apply it within a slightly different framework on this album.

The album finishes with the epic ‘Diamond in the Witch House’, which, at just under eight minutes, feels like a misstep here. Sure, on any other Mastodon record, the track would be right at home, but on a record as melodically driven and instant as this, it feels like a relic from past ventures.

This is however, nit-picking on a grand scale. With ‘OMRTS’, Mastodon have made a superb hard rock album that will open them up to new audiences. It’s easy to imagine that soon, cries that the band have ‘sold-out’ will echo around the upper-echelons of the early adopting post-hardcore community, but this is an evolution, not a full-on change in direction. All the original principles remain, the influences that can be heard on this record have been present on almost all of their albums; the only difference is that some have been dialled up here whilst others have been dialled down. Mastodon’s greatest gift is to make complex ideas sound simple, and this is their most instant album to date. A very strong offering indeed.

UK people can purchase a copy of the album here.

All words Lewis Gilmore. More writing by Lewis on Louder Than War can be found at his author’s archive.