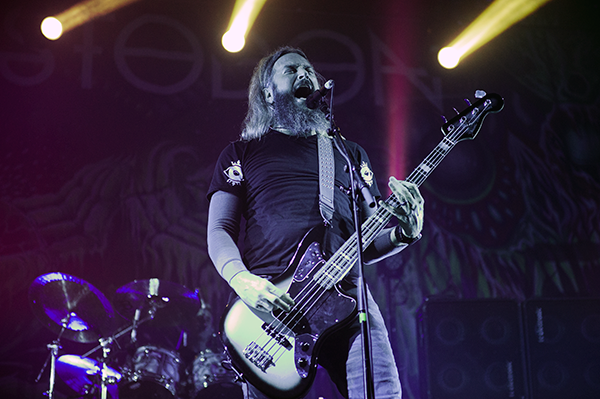 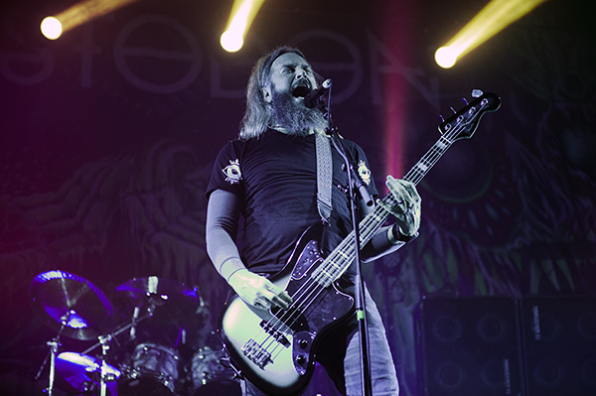 Mastodon photo above by Tess Donohoe

Mastodon released their latest masterpiece “Once More ‘Round The Sun” on June 24th to mass critical acclaim – for example, here’s what we had to say about it. It was another milestone in the illustrious career of the band and needless to say it was followed up by the band hitting the road. That road led to Southampton Guildhall last week where Louder Than War’s Nick Holmes and Tess Donohoe were entrenched. Read their review and check out the photos below. 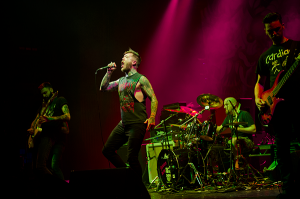 Krokodil (photo, right) may be unfamiliar but that is likely to change over the next few months. Made up of members from other British bands Hexes, Cry For Silence, Sikth and Gallows, they are fronted by Daniel P Carter. When not hosting the BBC’s Radio 1 Rock show he is an accomplished musician himself. He can also roar like a muthafucker. The group takes its name from the hideous opiate-based drug blamed for “cannibal zombie” attacks in various countries around the world.

This definitely is music with an almost painful aural bite, thirty minutes of well-polished and clinically delivered sonic sadism. The band has struggled to get together regularly because of various outside commitments, but judging by the response they should be a going concern. Expect to see them, ahem, melting faces at festivals next summer. 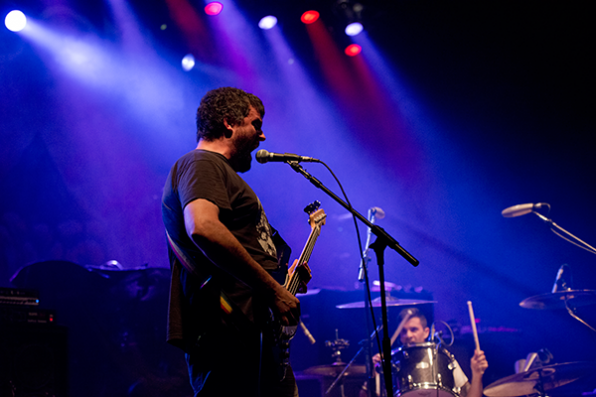 Big Business (photo above) (who we last saw with Melvins Lite – Ed) created big bemusement. They are a Seattle duo comprising drummer Coady Willis (Murder City Devils) and vocalist / bassist Jared Warren (Karp). Imagine a stoned Lemmy fronting The White Stripes at 33rpm and you’re kind of getting the idea. When they started the bar immediately became busier. Two geeks, arms folded, yawned repeatedly below a picture of Liam Gallagher. A David St. Hubbins look-a-like sat in an armchair deep in conversation with his mate. Meanwhile the two-man Spinal Tap-meets-Nirvana outfit ploughed on with obvious enthusiasm. The unfortunate acoustics of the high-ceiling venue made Warren’s holler seem even more incoherent than it otherwise might be. They are probably best enjoyed after a few beers and several smokes. Damn having to drive home. 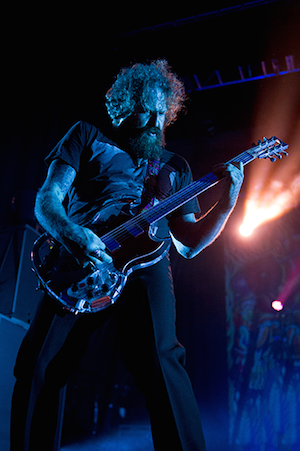 Mastodon (photo right) has been labelled as prog metal and the musicianship is flawless but these guys are hardly mild-mannered chin-stroking potheads. The crowd were ready to party and after a lengthy trip from Belfast so were the band. Bass-toting frontman Troy Sanders teased the crowd, asking if they reckon they can rock as hard as the Irish apparently did. The answer was a resounding “Yes!”. There were also 80s-style very short sport shorts, bright green ones, on sale at the merch table. The slogan “Ass-todon” across the backside was a nod to the naughty video for “The Motherload”, which featured a twerking contest and caused a fuss on social media. Stoners with a cheeky sense of humour then.

From openers “Tread Lightly” and title track of the recently released album “Once More Round The Sun” the old theatre was shaking to the rhythmic riffs. One chap did his best to stop his already drunk other half grabbing and singing at complete strangers. But they were cool with it as the Saturday night metal fever continued with, among others, “High Road”, “Halloween” and “Bladecatcher”. By then said chap had given up and partied solo while his ever-more-stocious girlfriend made a whole lot of new moshing mates. After closers “Crystal Skull” and tempestuous “Blood and Thunder” the band paid tribute to a friend who recently died, as Pink Floyd-like “Pendulous Skin” played on the PA.

It was a sensitive end to what had been one hell of a gig, a reflective calm after the storm. The “prog” tag may be at least partly because of the constant sci-fi and flying saucer-type sounds linking the songs through the set. Here’s to the Mastodon ship prog n’ rolling its way around the universe, maaaan.