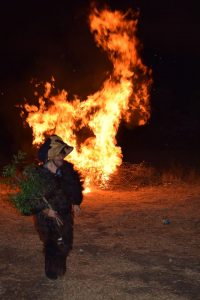 Review and Preview to next years!

In his debut writing assignment for Louder than War, Syd Howells reports back from the mystical and wonderful Master Musicians of Joujouka Festival and presents his case for a return in 2018!

“You don’t know man, you weren’t there…”  Through a combination of luck, unexpected organisation and a calling to return, it appeared I was.

A weekend with the planet’s premier purveyors of Sufi trance music is difficult to describe.  Do you begin with the fact you live in the homes of the villagers and musicians themselves?  Or do you wonder why only fifty tickets are available for the festival?  Perhaps you attempt to paint a picture of a unique and life changing unit playing music that can be difficult to pin down but which at its core is healing, ancient and utterly compelling? 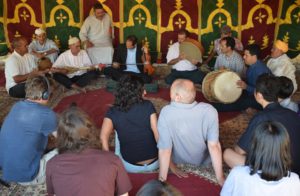 Many have visited Joujouka before, travellers and explorers without exception; Brion Gysin, William S Burroughs, the Rolling Stone Brian Jones (immortalised by the musicians in the song Brahim Jones Joujouka Very Stoned), CAN’s Jaki Liebezeit (a man whose study of rhythm consumed his entire life), Ornette Coleman, Anita Pallenberg, Timothy Leary…the list goes on like generation after generation of the Master Musicians themselves, forever.  Recent visitors include Jarvis Cocker, whose excellent audio documentary of his time at the village can be found here:  https://www.bbc.co.uk/programmes/b08hmd23

During the weekend in their home village, the Master Musicians of Joujouka played ten separate sessions over three days.  By day the music features hand drums, violin, flute etc. and is notable for its calm.  By night it’s a different story.  The sheer volume and entrancing music of their rhaita pipes and drums cut through the calm night air and can be heard miles away down the valley.  This is an ancient music and I am in thrall to it.  I could listen to them play until the end of time. 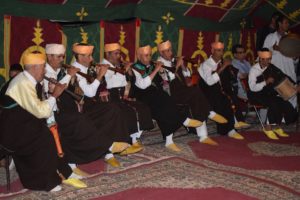 It is not just the music which contains magic.  The village and its people also are unique and the beauty of its location and friendliness and hospitality of the natives contribute to an incredible experience.  Worth seeking out are Boujeloud’s Cave (central to the tale of Boujeloud, the goat skinned, crazy dancing entity likened by Gysin to the Lupercalia, the Roman Rites of Pan) which overlooks the village and the Shrine of the Sufi Saint, Sidi Ahmed Schiech.  Joujouka: once you have been there, you will return.

The annual festival gives you the opportunity to join them in experiencing the magical sound of Joujouka and be a part of a unique community.  Next year is the 10th anniversary of the festival, and the 50th anniversary of the recording of Brian Jones presents the Pipes of Pan at Joujouka.  You should be there. 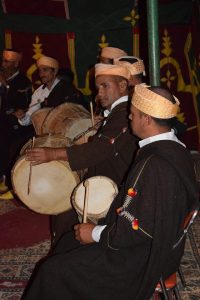 For further details on the Master Musicians of Joujouka and their festival, visit https://www.joujouka.org/

Words and photos by Syd Howells. Syd can be contacted on shabti@hotmail.co.uk and tweets as @SydHowells.