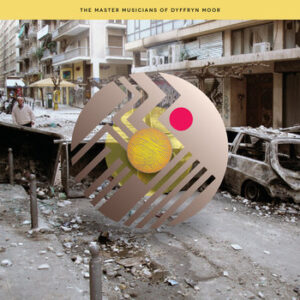 Pay-What-You-Wish Download on Bandcamp with any monies raised going to Wrexham Foodbank.

Simon Proffitt and his fellow contributors return with an album once again created by kitchen utensils and household objects only this time with added rage and sonic flare. Simon Tucker reviews.

It’s easy to be angry right now. There is plenty of fuel for the fire. Anger on both sides of the divide is twisting people into creations they themselves don’t understand. Confusion permeates every part of the living condition. The question isn’t how to stop it the real question is how to use it. If, like Proffitt and his anonymous friends, your rage is aimed at the current state of British politics then how best to counter the shit-storm flow? Get creative. This is what they know how to do and what they are good at. The return of The Master Musicians of Dyffryn Moor is perfectly timed as their music which mixes elements of tribal folk rhythms and hypnotic pacing is a universal sound which has no borders or creative restraint. This is music that has traveled and boy is it cathartic.

With ‘Contemporary Protest Music’ The Master Musicians of Dyffryn Moor have added slight by vital changes to their sound as they incorporate micro-loops sourced from West Africa, Polynesia, Sri Lanka which were the original inspiration for the music previously recorded by Proffitt and co. This artistic decision is a masterstroke as these loops add sudden moments of depth and beauty like when a human voice quietly emerges on The One About Disaster Capitalists (full title below) or when what sounds like another voice making one note reveals itself on The One About Tory MPs Posing In Foodbanks reveals itself adding a real heavy sense of melancholy.

Musically this is the most fierce recording yet by the band. The percussion is denser and more intense throughout the recording yet those involved still manage to find pockets of space to allow air in so you are not completely consumed by it. This is music that locks you in and holds you there until it feels like it is time for you to go.

Contemporary Protest Music is an EP that feels more like an album. It is a recording that is fierce, bold and wildly creative. Its anger is palpable and intoxicating it making a project that you will find yourself revisiting on many occasions. There will never be a time when you have fully absorbed every tiny detail of this release. It will never fail to reveal new and exciting elements to you. It is the righteous sound of protest without any lazy sloganeering. The instrumental nature of this EP means that you will be able to apply it and its message to any situation that calls for it for the rest of time. Brutal and beautiful.

1. The greatest trick the Tories ever pulled was convincing working class British voters, who feel left behind, to blame the EU & immigrants for their troubles while also convincing them to continue voting for the very party actually responsible.

2. How could it not make you angry, and I mean deep down gut-clenched angry, to know this Government has spent the last 8 years easing taxes on the rich & turning a blind eye to the billions the country loses every year to tax havens & then fining the homeless for having nothing?

3. With every fibre of my being, I hate what is happening to my country. Liars, self interested disaster capitalists and charlatans have hijacked political discourse. We are headed to armageddon but none of those advocating for this will be hurt and they do not care for anyone else.