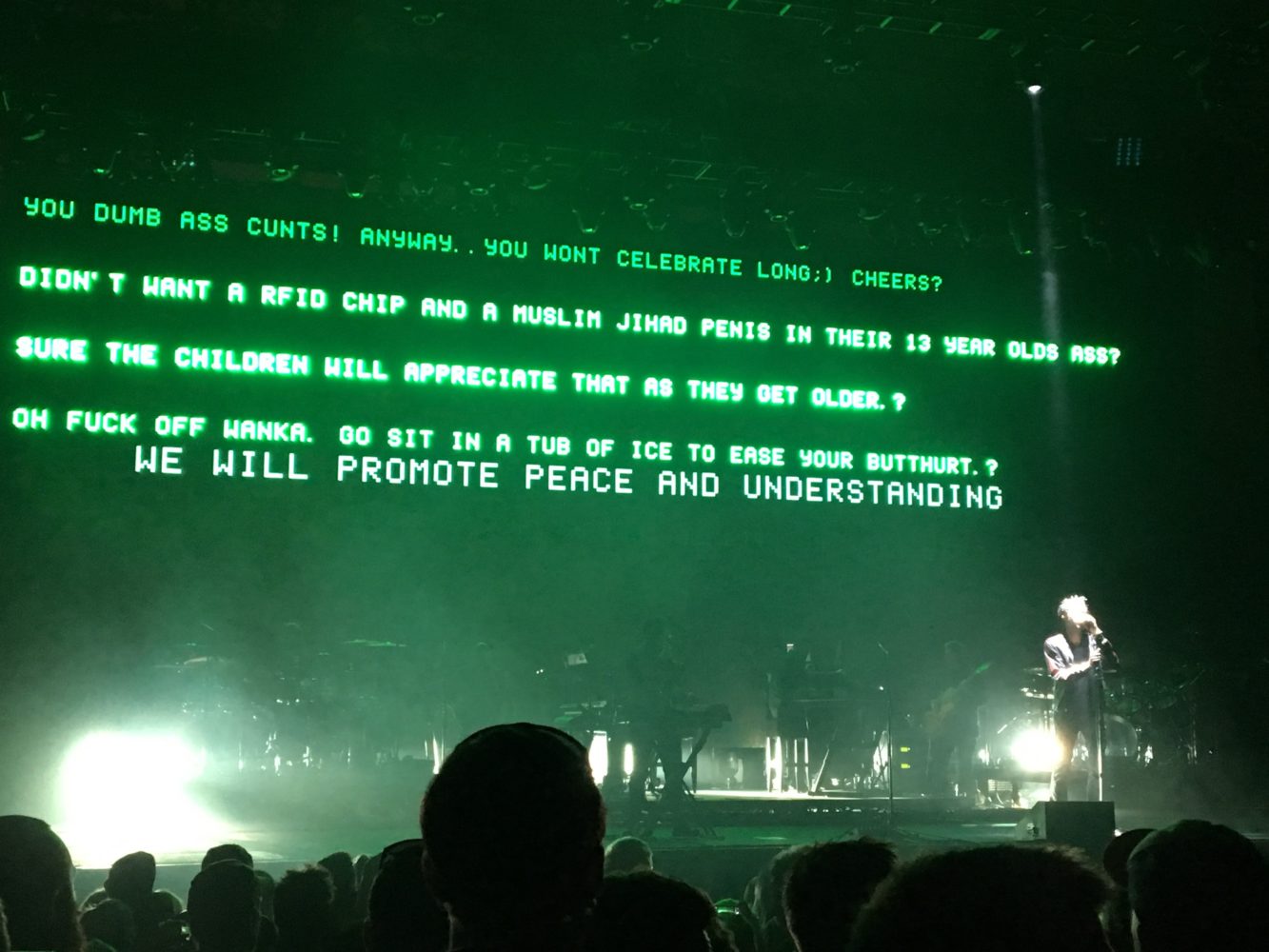 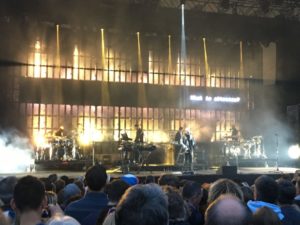 This was an occasion where worlds collided. The astounding ecological regeneration of The Eden Project, the inspiring and potentially world changing 5×15 talks and the three musical experiences to top off the event.

Eden as a venue is perfect, well thought out, surreal in a beautiful way and with excellent facilities. The only venue with glowing illuminated futuristic biomes shining into the night behind the stage. The sound was the best I have ever heard from an outdoor stage.

Those who arrived early could explore the Rainforest and Mediterranean biomes. A series of activist talks took place in the Mediterranean biome from 5pm. Subjects included plastic waste, healing the soil, education, and raising awareness on female genital mutilation. The photographer Giles Duley spoke powerfully about the legacy of war in Rwanda. Giles’s photography featured in Massive Attack’s set, an on-going collaboration with Robert Del Naja. They also produced a newspaper which was given out free to gig goers on the night.

The stage was set for music, but the mental images and purpose that go along with a Massive Attack event are political, question raising and as pure a form of activism as any other.

Time for Azekel. A short set of finely put together songs with minimal backing. Azekel has one of those voices that cuts through and has its own personality, identity and ability to transform a simple arrangement into a musical pleasure zone, a journey through melodic phrasing and song craft.

The venue filled up as we prepared for the appearance of Young Fathers, now a four piece. Live drums visually complemented the already rousing beats from Graham “G” Hastings. Alloysious, Bankole and Graham. All three taking the lead and providing lead vocals in rotation. For me the highlight was the latest single In My View, a brilliant pop song taking things into more accessible and stranger dimensions simultaneously.

Massive Attack arrived with Horace Andy fronting the band for Hymn of the Big Wheel, behind them the stage was back lit with what looked to be bars on a cell or cage. Horace Andy still has the most unique and magnificent voice, the song and sound of the band is timeless, the atmosphere electric. A strong beginning for what was to be a set of Massive Attack classics, alongside much newer songs and extended and reworked versions.

Next was Rising Son with messages appearing and moving across the screen, virtual drone bomber conversations about engaging with a target. The juxtaposition of the banality of a text and the horror of the purpose, set against the bass and creeping menace of the track.
The images on the screen tonight were so powerful; anti-war sentiments, comments on transient social media activity, selfies, Brexit apocalypse, Love Island tabloid headlines, Gary Barlow showering the crowd with plastic at Eden and Trump. The 5×15 talks brought back to the fore through art and music. 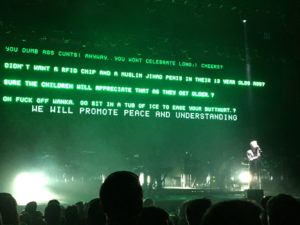 Azekel returned to the stage for Ritual Spirit from the EP of the same name, Young Fathers came back on for Voodoo in my Blood and He Needs Me, introduced as the best band in the world by 3D. Young Fathers and Azekel fit perfectly into the collective of free-thinking brilliance that is Massive Attack. Lyrics from Karmacoma appeared in a track new to me, or was it a radical reworking?

Angel, Inertia Creeps and Safe from Harm closed the main set, each completely brilliant, the bass filling the night and the vocals crystal clear.

The encore began with Take it There and ended with an epic version of Unfinished Sympathy. This song has been a firm favourite for so many years, to hear it played this well, with so much power in this environment, was truly magical.cToday proved we need Massive Attack more than ever before. The mix of music, culture and politics, the presentation of alternative viewpoints providing original thinking against mainstream media manipulation. All with groove, with melody, with such amazingly well curated voices. Massive Attack combine so much of the best music has to offer. They have the ability to make the most unusual combinations fit together seamlessly and the rare gift of making electronic music which is timeless. 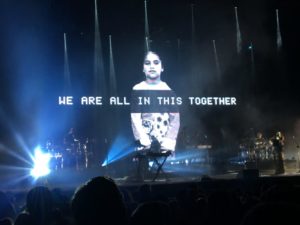