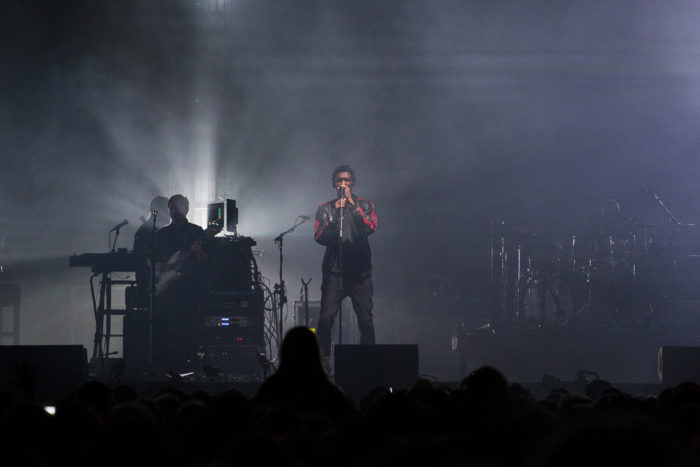 In the huge custom-built arena of Steel Yard at Filton Airfield, the anticipation for Massive Attack’s homecoming show was palpable. Their last Bristol gig had been headlining The Downs festival in 2016 in the pouring rain. This time, we had the luxury of a roof, as well as the pleasure of their company. While we waited, the DJ left the stage, making way for crowd singalongs to Britney and Cher, a chance to enjoy a false sense of security through the nostalgia of the year of Mezzanine’s release, or perhaps the first of the band’s many morsels of food for thought that evening.

Kicking off the show, the glare of orange light led not into an original, but a cover of The Velvet Underground’s I Found A Reason. Massive Attack favourite Risingson was the first original track, with iconic trip-hop beats to send the expectant mood into raptures: Robert Del Naja’s vocals were on form, suggesting that any concept of “classic Massive Attack” is not confined to previous decades. Black Milk brilliantly showcased special guest, Elizabeth Fraser of The Cocteau Twins, who later sang a heart-stopping rendition of Teardrop.

Not content with performing a predictable album playthrough, as some may have expected, the band interspersed their own tracks with many covers, playing Bauhaus and The Cure and then lead into the tracks that sampled them. The album’s chronology was also bypassed for the sake and strength of setlisting and to accommodate the covers. The atmosphere remained lively when Mezzanine was briefly rested, especially during a later rendition of Ultravox’s Rockwrok. Another standout was a version of Pete Seeger’s Where Have All The Flowers Gone, Elizabeth Fraser’s vocals floating and lilting over a lullaby-like backing.

Meanwhile there was a sharp visual juxtaposition, with images of injured and dying war victims shown on screen. Documentary maker, Adam Curtis had been recruited to create these visuals, and they oozed an atmosphere of unease. Political slogans, factory workers, virtual cities, and – oddly enough — owls, were shown throughout. When Tony Blair or Donald Trump appeared, a chorus of pantomime (or were they?) boos followed. It was no easy nostalgia tour. Arena photographers were placed at an unusual distance, undoubtedly with the projections in mind.

At times, it felt a little contrived. This was felt especially strongly when a cover of Avicii’s Levels was played as the penultimate track, accompanied by Nike adverts and more military footage. That said, the point was rammed home — we’re oblivious drones in a corporate military dystopia. However, Massive Attack have been challenging the status quo for three decades, so why stop now? The climax of the show came with Angel, with dub legend, Horace Andy’s dancing echoed by a jubilant crowd. Blaring electric guitars and two drum kits producing accurately album-faithful beats throughout the show were epitomised here.

Sometimes the volume could’ve been turned up a little: for a hometown show the sound felt a little underwhelming at points, but this was not a major issue. More problematic were the infrastructure issues: card payments were not working, and the toilet queues seemed to extend for miles. Playing the whole of Mezzanine meant that a track like Exchange felt like little more than an interval accompanied by a slideshow. However, that’s arguably the effect the band were going for, equally on the album and in the set.

The show ended with album finisher Group Four. With a conciliatory bow and clasped hands to thank the crowd, Del Naja and co. left the stage, followed by bright house lights and a reassuring lack of faux-encore. As promised by the band in pre-show literature, this was not a Hollywood ending. However, the disconcerting aura remained. Overall, Massive Attack had managed to deliver on their vision: a reimagined live Mezzanine, accompanied by a powerful visual experience. Fans will have been very much satisfied.

Thanks to Jonny Pinches for standing in at late notice to write this review.

Photography by Michael Brumby. You can find his website here.