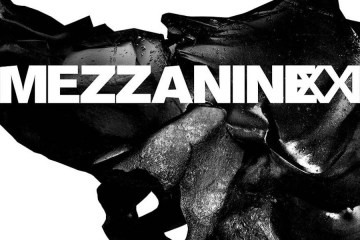 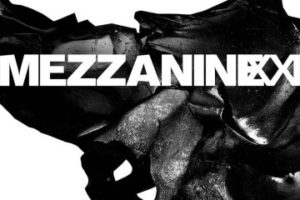 Lets be clear about this tonight’s Massive Attack concert is something very special. Just for having the astonishing Liz Frazier on stage for the first time since her 2012 Meltdown to sing four songs is something else to have  Horace Andy delivering his distinctive plaintive tones is another perfection in a different kitchen and then there is the core duo at the heart of this band/project Robert Del Naja and Grant Marshall shuffling on and off stage to deliver their rasping very British raps of documentary and paranoia that are even more apt now than when the 1988 Mezzanine album they are celebrating was released.

In the swirl of stinking politics, out of control despots, daily digital half truths and shivering 21st Century paranoia the band’s soundtrack and punk era ‘question everything’ approach has never sounded more vital.

Tonight they play Manchester’s cavernous arena with a show that is dark, intense and claustrophobic as they celebrate that groundbreaking and still futuristic third album – a record that was a game changer then and still peers into the future now. It was an album that pulled the group apart when they recorded it and saw them pulling more on their post punk strands that were already apparent in their sound and away from the soul fused flavours that had disguised their debut. And yet they kept those layers of the black music and culture that was equally and perhaps even more astonishingly creative than post punk with the experiments of space of dub and the dance floor groove of funk. This pot pourri of music and style so much part of their Bristol backdrop of smoke filled sound systems and rabble rousing punk as if they were making sense of the Clash’s manifesto and taking i5 into the 21st century.

How a band as intense and inventive as this has managed to wander around the mainstream is a cause of celebration. If you were expecting the usual stadium show of bombast and extrovert  backslapping then you were in the wrong place.This is a subtle yet far more powerful communication and no mere rock show full of back slapping bombast and fake bonhomie.Massive Attack are delivering an exercise in intensity and melancholic intelligence and the darker it got the more it pulled you in.

Many times I’ve made the point that Massive Attack are the last great post punk band pulling apart all the strands of that moment of time and the creative freedom offered by that fractured period. Not that they were ever trapped even in this most fast forward of pasts and tonight’s show is a perfect snapshot of these current times musically and culturally. Massive Attack are perhaps the one band who fulfilled the promise and adventure of post punk and took it into the future on their own terms whilst still throwing up question marks in a world of idiot Trump-certainties.

With a stark yet hit tech stage set up and no support band the band build the tension before coming on for a delicious razor sharp version of The Velvet Underground’s I Found A Reason (which they initially sampled for the album’s Risingson) delivered by the pool of musicians who make up the band for this evening which includes two drummers, a bank of keyboards, two guitarists and a dub heavy bass. It’s a perfectly jarring start – the jangling guitar rush of the song sounding off kilter in its almost conventional rush – it’s  a neat side step from Massive Attack playing a song they have never played live before and a great dislocation if you were expecting to be transported straight into the middle of the Mezzanine experience and one of the several nods to samples used for the album being played as full songs.

Thats part of the perfection.

The last time I saw them was in Manchester at the at the Manchester International Festival event inside the old warehouses next to Piccadilly station in 2015. That night they played PiL in New York style behind screens whilst they covered all manner of signpost songs like The Jesus And Mary Chain, Suicide and a stunning version of Bauhaus’s Bela Lugosi’s Dead perhaps giving a nod to the original dark dub track from years before they started their own journey. That gig still ranks as one of the greatest I’ve ever seen – full of surprises and of turning performance inside out with the band almost delivering a soundtrack to Adam Curtis’s powerful and mind jarring political films that were whizzed around the aching and large room on giant 360 screens.

If tonight is ostensibly  slightly more conventional then it’s only just. Massive Attack deliver the dark themes of Mezzanine which are more prevalent now than ever and the medium is still the message with phrases,images and words flashed on the giant screen that jolt you back to reality – lots of stuff about the 2D world we live with dead celebrities living for ever in the digital playground mesmerising us in an edited perfect past giving us a future blur and a fear of the present and making digital serfs of us all.

Tonight is not a straight run through the album, they play with some of the quotations and samples in the songs – there is a perfectly delivered version of The Cure’s ‘10.15 On A Saturday Night’ which is sampled on their take on John Holt’s1968 reggae classic ‘The Man Next Door’ – one of they cuts on the Mezzanine album which they play next and is the first to feature the plaintive and stunning vocals of the ever skylarking Horace Andy. A key part of the Massive experience, Horace skanks across the rage despite his sore leg and returns later on to deliver the heavy, loping groove of ‘See A Mans Face’ with his sweet voice bouncing around the huge hall and then owning a swirling and darkly dangerous version of the cataclysmic album opener Angel.

The mood switches perfectly when Liz Fraser sings Pete Seeger’s poignant and political 1955, ‘Where Have All The Flowers Gone’ with the enigmatic Falkirk born, former Cocteau Twin singer, delivering that and her other three songs impeccably and her off kilter gentle yet intense presence fills the stadium as she also sings the three  Mezzanine tracks on which she is featured -the Wobble bass heavy ‘Black Milk’ which is played live for the first time since 2007, the set ending, claustrophobic, layered groove of ‘Group Four’ and a simply stunning version of ‘Teardrop’ which receives a standing ovation from the audience.

It’s this shape shifting lack of gonzoid focus that is Massive Attack’s strength with 3D and Daddy G shuffling on and off stage to deliver their husky, brooding and very English raps. It’s the concise,meticulous, introvert use of their voices that is so effective, they are not shouting in your ear, they are deeply intelligent troubled people in insane times delivering their narrative to anyone who cares to listen.

There is a lot to be said and the meticulous production of the Massive Attack show says a lot with the film clips and slogans existing in a perfect collage with the brooding music. Some of the film clips are starkly terrifying and some deliberatly banal underlying the theme of our mesmerised lives ‘inside the pleasure dome surrounded by the eternal war’

There are so many high points in tonight’s set from the coiling, loping, double bass groove of ‘Exchange’. There also the first live airing since 1997 of Dissolved Girl and the band playing an unexceptional cover of Ultravox’s underground cult brilliant Rockwrok – a genius tune that came out in the middle of the punk wars and couldn’t quite find its place but changed the mindsets of all that fell in love with it. It was a very early example of the beyond possibilities inherent in punk and a hint at the possibilities of operating beyond the guitar, bass and drums straightjacket of the times and yet delivering a perfect punk anthem – to hear it blasted out so meticulously in an arena was almost emotional.

Of course it was all beautifully delivered, razor-tight and effortlessly switching atmospheres with nuanced playing and great textures in a masterful display of dynamics and glowering patience. The multilayered, multi textured set created a dark cloud of beautiful intelligence that pulled you into it black hole of intensity which peaked with the climactic, set ending ‘GroupFour’ which built from Liz Fraser’s vocal perfection into an apocalyptic wall of sound with the guitars building into a dark wall of sound that felt like the modern day Swans with its infernal bruised beauty and layered end of times drones. After that dark climax there can be no encore. The juggernaut show shudders to a halt like the plug has been pulled on this epic trip.

Massive Attack are as mysterious and challenging as ever.

There are moments of blissful beauty. There are those patented heavy grooves.There is the dark invention and the wake up calls peppered through this swirling and brilliant set. There is also a perfect pop with these dark moods being laced with perfect melodies.

They have influenced a whole generation of musicians from Gorillaz to Nick Cave and are still the leading example of how to put on huge shows that pull you in utilising modern technology and 21st century production to somehow hold dear to the creative spirit of a maverick time.

Yet again Massive Attack have created a hypnotic show on their own terms.