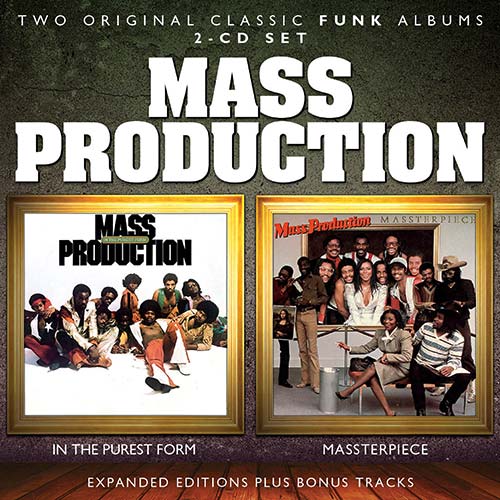 Fourth and Fifth LPs by popular US Funk crew Mass Production, plus a surfeit of bonus single mixes….Ian Canty looks at when the roaring 70s gave way to the austere 80s in the United States Of Funk

I think we in the UK tend to under-estimate exactly how huge Funk was in the USA during the 70s. While Glam Rock, Punk and New Wave took hold on this side of the pond, Funk virtually had a decade long hold on the dancefloor over there, inspiring and firing the Disco boom along the way. But most of the bands involved merely saw their adventures in that field as dabbling – they were always still Funk bands at heart first and foremost, never losing sight of that. After Disco waned, the Funk acts continued on regardless, adapting their approach to the times.

Norfolk’s (no Alan Partridge jokes please, we’re talking Norfolk, Virginia here) very own Mass Production were no exception – versatile Jazz Funk experts numbered their considerable ranks (the name was Mass Production was apt as this was 10 piece group in the mode of their Jazz big band forerunners), meaning that they could turn their hand to any fad arising all the while retaining their own identity. As was usual with outfits of this type, the various members of the band had a history reaching right back into the late 60s when three core members (Lecoy Bryant, Ricardo and Tyrone Williams) came together as the wonderfully named Soulnifics. Gradually this band merged with the similarly inclined Soul City and the final piece in the jigsaw was the arrival of vocalist Agnes Kelly. They formed officially under the moniker Mass Production in 1974 and by 1976 they had signed to Cotillion Records (an off-shoot of Atlantic), from then on beginning to make serious inroads on the R’n’B and Billboard charts.

Fourth album “In The Purest Form” was when the band hit their peak, both in terms of popularity and talent. The first track “Firecracker” was their best known song and a brilliant record by anyone’s standards. An awe-inspiringly tightly coiled, insistent Funk groover that may well have given the likes of Rick James cause for sleepless nights, it is very special and the rest of the LP is no let down in comparison either. They could though still cut a creamy and dreamy Soul ballad like “Next Year” or revert right back to their Jazzy roots with the short but breath-taking instrumental “Our Thought (Purity)” and the frantic “Can’t You See I’m Fired Up” was a certified roof remover. Of course the standard of musicianship is uniformly high, but the exuberance and energy on display makes it not seem like showing off either, just all part of the groove.

The vocals, mostly handled by Agnes Kelly and Ricardo Williams but occasionally calling on most of the band, don’t let the side down either as they are excellent throughout and perfectly match the material. The LP was a triumph and deservedly their biggest hit on the US national charts. (NB the track-list for the bonus items is a bit scatty – here’s how I think it should read from Track 12 onwards – Track 12 “Firecracker” (12″ inch version), Track 13 “Eyeballin'” (12″ inch version), Track 14 “Can’t You See I’m Fired Up” (12″ inch version) Track 15 – “Love You” (12″ inch version). All the tracks listed are there so nothing too major to worry about. This has been a public service announcement.)

Next came 1980’s punningly titled “Massterpiece” LP as Mass Production looked to face the new decade with a slightly more sophisticated outlook/image, more slick and streamlined, a world away from the “Spaced Cowboy” archetype of early 70s Funkadelic (the flares had finally gone!). Times had changed and Mass Production went with the flow. “Angel” is beautifully constructed mid-paced to slow-jam ballad and easily compares to the stuff that Kool and the Gang were recording to great success at the time. This new LP follows a path a little different from its predecessor, being a bit heavier with slap-bass enhanced, skin-tight Funk work-outs like “Forever” and “Nature Lover” than before. The Jazzy interludes have been scaled back as “Massterpiece” aimed squarely for the dancefloor.

The slow-burning instrumental “Shante” was the big hit on this LP, the seemingly “milk bottle” percussion leading to great success at Discos just as that stereotypical sound was dying – something a bit tougher was needed and Mass Production had all the attributes to provide just that. Odd that a band with very capable singers should put out a single that didn’t utilise them, but the duelling brass section featured strongly here makes it work. Having hammered four to the floor dancers for the vast majority of the LP, they bring things to a close with a lovely, lazy old ballad in “Please Don’t Leave Me”. This assured recording was another deserved success and Mass Production continued onwards into the 80s, releasing three more albums until they split up in the middle of that decade.

Though most people in Britain were oblivious to the charms of Mass Production at the time, the proof here is one of a sparky and skilful band that certainly appeared to have all the attributes required to succeed, but perhaps having so many band members did contribute to a certain facelessness in the more personality driven world of the UK charts of 79-80. That being said this is certainly a very enjoyable twofer consisting of a couple of more than solid Funk LPs from a time when the sound updated itself from the clichéd “pimp” image to confront the changing and more challenging climate of the 80s.