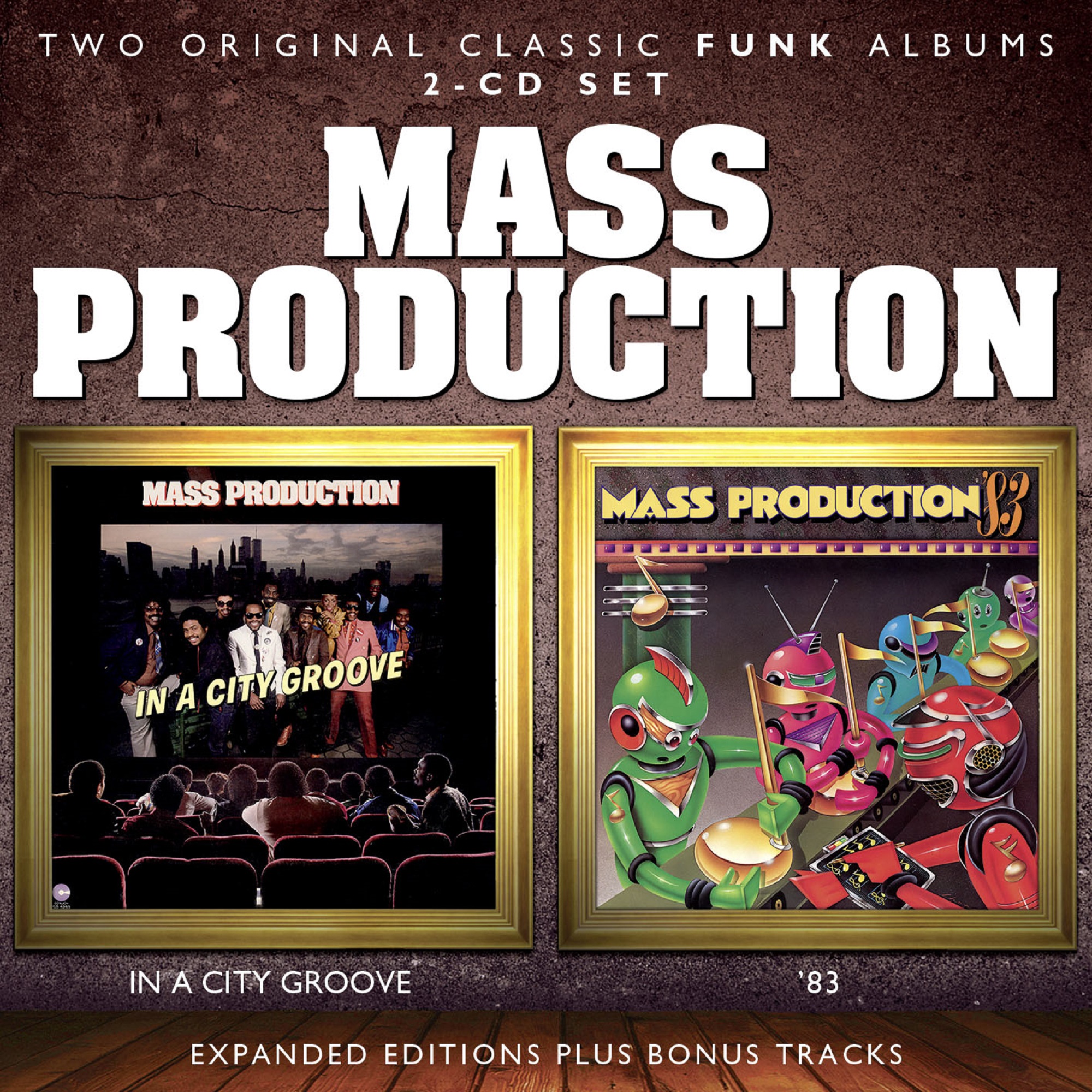 Last two Cotillion albums of the Norfolk, Virginia-based 10 piece Funk band Mass Production from 1982 and 1983 respectively. LTW’s Ian Canty enjoys their company while noting the metamorphosis of US Funk as the ’80’s wore on.

For the inside track on Mass Production’s previous two albums, see here.

In 1982, Mass Production followed up their two very successful albums “In The Purest Form” and “Massterpiece” with “In A City Groove”. It marked a slight change of tack for the band, with an overall much smoother sound and the use of a lot of strings and slap bass. These innovations are best represented here by the marvellous, flowing, near-title track “Inner City”, almost what you would call “break-beat ready” as you can also hear the influence of Hip Hop and what it might take from them too.

A beautiful summery sound, it is difficult to understand why this single didn’t make as much headway here, the UK was at around that point welcoming Linx into the charts and for me Mass Production definitely had the edge on them. Perhaps there was so much of this kind of stuff bubbling under at that precise moment, with Kool and the Gang (who Mass Production weren’t a million miles away from on their male lead vocal efforts) also hitting big? I suppose some of it may have been down to image as the switching between male and female singers and being a 10 piece unit may have found them struggling to have a true focal point. Inner City was a reasonable sized hit in the US R n B charts though and at least kept them in the public eye on that side of the Atlantic.

Though this track is probably the crowning achievement of this LP, the record on the whole is a very enjoyable and appealing example of uptown Funk at a crucial turning point in time. There are some great soulful ballads in One More Chance and Should Have Known Better (following on from each other it’s hard not to think that they were the start and conclusion of the same theme), bass-driven dancefloor fillers (Maybe Maybe has some superb female vocals and the track itself is an absolute corker) and throwbacks to their Jazzy pasts in the floating brass arrangements employed throughout.

This is a classy disc by a band who were clearly confident in their direction and playing. This album, like the follow up “83”, also presented here, is enhanced by the inclusion of 7″ and 12″ takes of the single tracks (though Disco itself was pretty much dead and gone by this point, 12″ mixes were still all the rage and necessary for any real dance act).

It is a very smooth sound though and folk wanting a grittier type of street Funk may leave a little disappointed, but it’s chock full of ultra-catchy, wonderfully sung and played dance music.

Things were changing in the Funk world though and as ever, Mass Production took note of new ideas and amended their work. Rick James’ “Punk-Funk” was beginning to show its hand (the final track on In A City Groove, Weird certainly owes a little to him at the very least) and a young man who called himself Prince was making waves with his first few offerings. Synthesisers were also in fashion and being employed more and more by acts like Mass Production. Indeed, Should Have Known Better, with its synth squiggles, pre-shadowed the sound of their next LP ’83.

With ’83 Mass Production made adjustments to their template, because being keen watchers of the development of modern music, they saw the changes on the scene and didn’t want to get left behind. So they subtly upgraded their music with the times. The string arrangements of the previous record gave way to electronics and a slight hardening of their sound also took place. Uptown had given way to Street Funk and Techno so MP themselves altered their approach so they wouldn’t appear anachronistic. Though they didn’t make sweeping changes (it was clearly still the same band that recorded In A City Groove) they decisively moved into the future.

The album begins with the floating flute/Jazz Funk instrumental Sun Dancer, which is very nice but doesn’t really give you a clue about the other contents of ’83. This gives way to the lilting electro-Reggae of Time Bomb, much more of an indication of what was to come. Continuing in the synth vein is another instrumental, the cutting edge sounding (for 1983 that is) Victory ’83, complete with computerised blips and squeaks. Style comes next, very much in the mode of what Prince Rogers Nelson was up to at the time, but a very catchy and danceable bit of uptight Future Funk nonetheless.

Farewell My Love is more redolent of their earlier days, being a shimmering mid-paced drift of a song and the following Soul ballad Here You Come (Creeping Back In My Dreams) harks back to earlier days too, with the merest smidgeon of War’s Low Rider in the intro.

The next track, Chasing Rainbows, is in the same tempo as its forerunner. This is a classic lazy groove which showcases the brilliant vocals of Agnes Kelly and also gets the record back on track with its synth-pop affectations featuring keyboard motifs that dominate the backing track. Mass Production round off ’83 with the show-stopping modern Funk of Don’t Stop Believing; it’s a great end to a satisfying LP that despite its trendy trimmings stays true to their long held values of producing danceable and catchy pop music.

Though a reasonable successful update of their sound, sales figures weren’t great. Sadly the band did not go onto produce much more, folding sometime in 1987 after a couple of unsuccessful singles (one in 1984 on the Sugarhill label).

This twofer represents a time when Mass Production struggled to follow their big hit Firecracker but adapted well to what was a rapidly changing dance music market. Both albums have many catchy and enjoyable songs with much to recommend about them. Though big bands like Mass Production were clearly on the way out, the skill and craft in their line up meant they could turn their hand to virtually anything and do so with a great deal of class.

This collection will not tax your brain but it will move your booty! Lovely, easy, summertime listening.