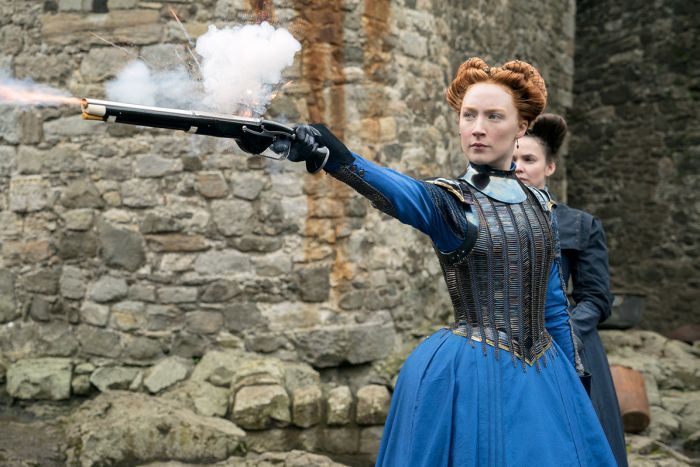 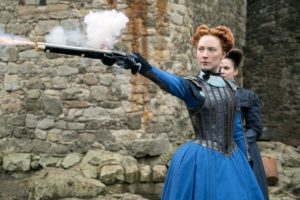 Mary Queen of Scots begins and ends with Mary Stuart’s neck on the line, the blade poised and ready.   Flashbacks notwithstanding, the knives are out for this monarchical misfit from the moment her party arrive on Scotland’s shores, for in 1561, this is a country more turbulent than any tide.  Saoirse Ronan embodies the rebellious conviction of Mary, while Margot Robbie inhabits several iterations of Elizabeth I, as the last vestiges of her former humanity are subsumed to the throne and its corrosive, insatiable sovereignty.

This is a highly accomplished and assured debut from the artistic director of the Donmar Warehouse, Salfordian and Cambridge graduate, Josie Rourke.  There can be no true spoilers in the court of British history and so this is a film made in the knowledge that some viewers will already be familiar with the events depicted and some will not.  The success of the film cannot hinge on the crux of the narrative any more than it could with a staging of Coriolanus or Much Ado About Nothing, both examples of Rourke directed plays.  Again, our focus is drawn to the telling of the tale and the context in which the tale is currently told.  The viewer might well ask, how timely is this story; why are we revisiting the past?

It is hard to offer a critique of Mary Queen of Scots that pays no heed to the times we live in.  Like many recent cinematic successes, despite the age of the story or the length of time it spent in pre-production (consider, for example Three Billboards Outside Ebbing, Missouri, a film redolent of the moment that had actually spent a decade in gestation), Mary Queen of Scots feels extremely redolent of the UK today.  The radical departure with this kind of period drama is that formerly such ventures, particularly TV adaptations, were conservative gestures in entertainment, confirming the old order, glancing back on simpler times and reassuring us with a Sunday night glimpse of Merry Olde England.  Mary Queen of Scots works because it is about living on the fault lines of history, where power, gender and identity are the shifting tectonics beneath our feet and we must leap across chasms to gain a footing in this rapidly reshaping new world.  In those respects, set against a backdrop of a Scotland as deeply conflicted by the prospect of self-determination as England is about Brexit, Mary Queen of Scots is an incredibly contemporary drama.

As with The Favourite (2018) which deals with machinations in the court of Queen Anne and the end of the Stuarts over a century later, the protagonists in both films dance for their lives over the gaping prospect of vacuums of power, plunging into chaotic darkness as the new norms become political deadlock whose resolve only seems possible through the brutal crudity of revolution.  Sure, the pace slackens and the horse latitudes are reached somewhere before the middle of this tale, yet underpinned by Max Richter’s compelling score and thrown forward by the explosive energy of Ronan, the second and third acts of Mary Queen of Scots gain momentum and gallop towards that terrible finish line.

Unsurprisingly given Rourke’s CV, there are theatrical aspects to the ‘staging’ of some of the scenes, most notably a key moment involving an incendiary speech by John Knox (David Tennant) to a congregation gathered inside a church all beating a rhythm against the walls with their fists.  It’s a performance in the round that uses the positioning, sounds and inventiveness that is the vernacular of stagecraft and it works perhaps because of that.  There are aspects of that same immersive intimacy in far less volatile scenes in Mary’s chambers, although some of those also become scenes of eruptive violence and movement as events become less predictable.  This kind of direction, transferred from the stage to the screen, was a strength of the movie, lending a freshness and unique approach much needed in this genre of cinema.

David Tennant’s performance is reserved, ominous and brooding beneath his hat and beard – here is a man who can command a performance with his eyes and voice alone.  He is the embodiment of the self-assured sanctimony he professes, at length, to despise in the Catholics he hates.  He is a dark presence that haunts the very core of the film, lingering on in the majority of scenes in which he is physically absent like a malevolent spectre even though he is not yet dead.  You can feel his congregation orbiting around him ever closer with his every word, drawn inexorably towards this black hole of a man, through which there is no way out the other side.

And indeed, from the moment that her boat reached the shore, there was no way out for Mary Stuart either.  And no way back for Elizabeth, who by the occasion of their controversial meeting in the film, had become a human husk, her body and soul colonised by the first kicks and twitches of empire and the nascent capitalist machine.  Whether you agree with them or not, all the main players here have subsumed themselves to their principles regardless of what that meant for themselves or others as humans.  So maybe Rourke’s Mary Queen of Scots is, the ultimate cautionary tale as we leap across the chasms and try to break the deadlocks… and the chaotic darkness looms.

Find the trailer for Mary Queen of Scots here: