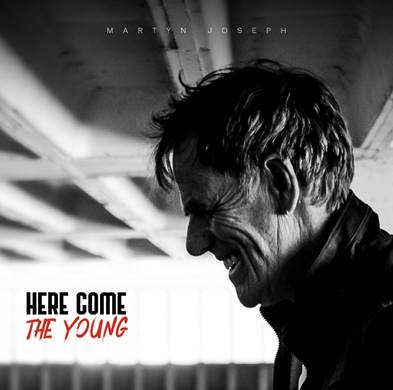 The theme of uncertainty via the  personal and the political is a common theme in the Martyn Joseph songbook. What shines through on Here Come The Young is an overwhelming sense of gratitude and optimism.

Martyn Joseph has never avoided  taking on a challenge or opted for the easy route. On Here Come The Young he’s supervised by Gerry Diver who takes on not only  the role  not only of producer but adds some defining  finishing and flourishing touches here and there.  It’s apparent from the off as the rousing title track, one which has been honed in live performance, suddenly benefitting from Diver’s shrewd and sensitive entries on banjo, mandolin and fiddle. He also adds both a size and a close up intimacy  to the vocal giving a warning  that this record might see the Joseph boundaries being nudged.

One can’t help being reminded of a Sixties  biting Dylan as he sings “Tired of rising oceans, Tired of bigotry, Tired of racist leaders, Eroding liberty, Tired of a lack of shame, Tired of failed accord, Of colluders in a private game,  Tired of law ignored.”

It  provides a flag waving, chest pumping, anthem stating,  opening flurry before leading to a shake of the head at how he’s able to follow the verging on riotous romp on Get Back To You where the backing band in the form of Pete Flood providing shuffling drums to MJ and Gerry Diver’s guitars offer a Springsteen-ish light heartedness, with the up close and personal intimacy,  tenderness and bare emotion of Loves Majority and  the telling sentiment that “one brief and shining moment can rinse the soul.”

This Glass takes sets up a grove with a bluesy feel and he’s on piano for Summer Has A Way Of Finding You; the vulnerability matched as he slowly and purposefully finds his way round the unfamiliar keys. It’s linked by the constant  hope that by encountering songs that uplift despite visiting some tough places will leave us buoyed and positive – we’re urged to “wake up and seize the day”, look upon glasses that are half full and lift our faces to the bigger view.  It may need time and a magnifying glass to get into the depth, the subtlety and the care of the lyrics but to once again namecheck  Dylan, like the bard’s albums, major songs start to emerge. Take Back The Sky will likely be there but Collateral may be ‘the one’. A song where it’s hard not to see the Springsteen ties that bind and  an analogy that’s followed MJ wherever he goes.  However, the bottom line is that It’s more than just  admiration for  the Boss that inspires him to making music of this stature, but a genuine empathy and ability to be a rich inspiration in himself. An album for the head, the heart and for the soul.

Watch the animated film of the title track of the  album here: