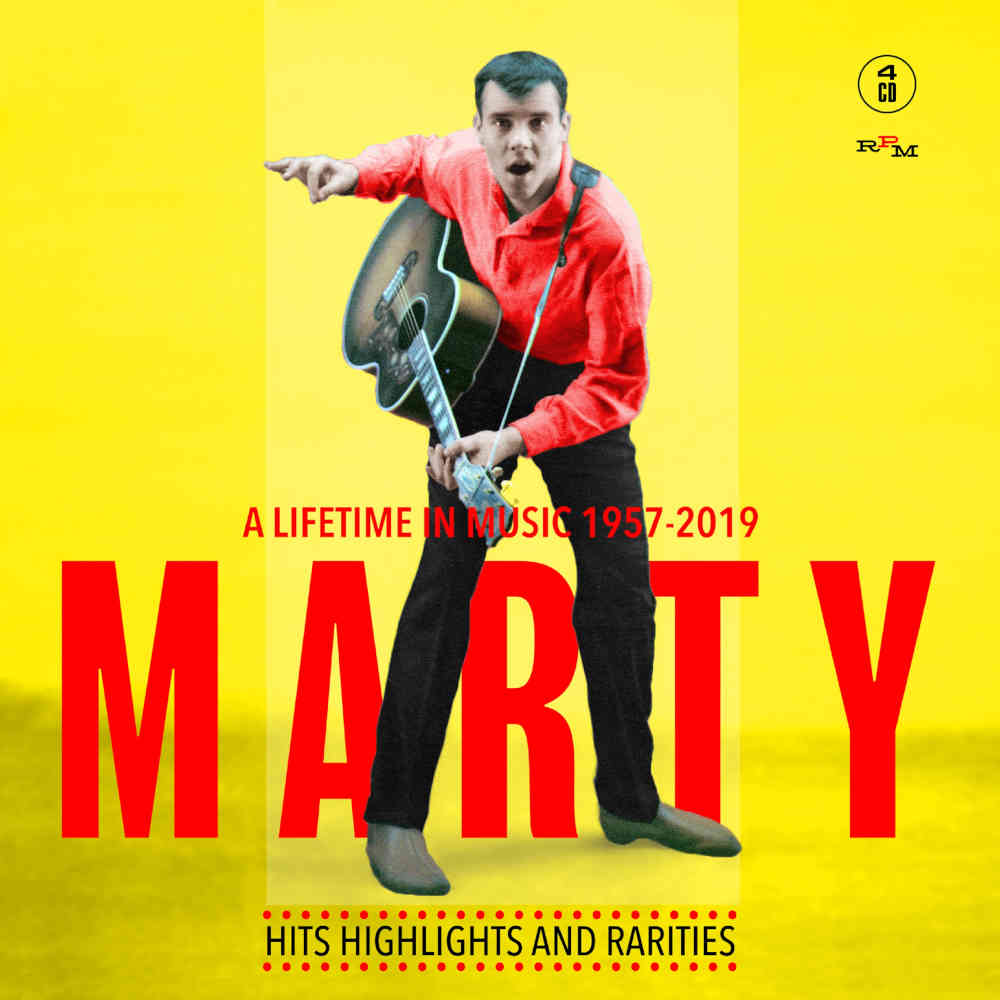 Marty Wilde – A Lifetime In Music 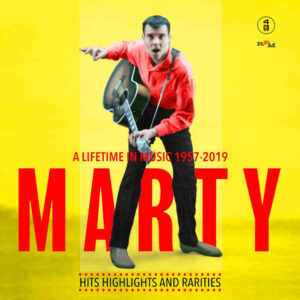 Reginald Leonard Smith was just another teenage rock & roll hopeful on the Soho scene when he was spotted by starmaker Larry Parnes. Parnes quickly bestowed the more exciting moniker Marty Wilde on the youth – it was something he did for most of his charges, like Billy Fury, Duffy Power and Vince Eager. This would have an echo down the years on the 70s punk scene – the name Billy Idol isn’t so far from Marty Wilde when you think about it.

Received wisdom has it that the first wave of UK rockers were mere pale shadows of their American counterparts, with only perhaps Fury demonstrating the necessary rawness. Part of this was wrapped up in Parnes’ managerial style. His modus operandi was to groom his artists to ride out the rock & roll fad and then move them into to “showbusiness”. Tommy Steele, one of his first clients and a prime example of his work, launched into a career in light entertainment when his rock hits dried up.

Another part of their non-acceptance was that the original rock & roll boom was so tied to America in its language, look and sound: it just seemed a bit silly for the hardcore rock & roll devotees to hear people from Surrey, Liverpool or London singing about graduation, high school bops and white sports coats. In truth the British were far less authentic a proposition than Little Richard, Eddie Cochran and Jerry Lee Lewis, they couldn’t help to be and it would take years before most of the early British rockers gained acceptance.

Nevertheless most of Parnes’ stable were wildly (sic) successful on this side of the Atlantic. Maybe this was a little down to “home town pride” and the local singers being more accessible. The fact was that Elvis, still then the brightest star in rock, remained in the US thanks to Colonel Tom Parker and the other American stars toured here infrequently, so a need for home-based talent was there. Many of the hits the UK element scored were more or less straight covers of tracks originating from the US (Wilde himself included, as the first disc entitled Singles A’s & B’s demonstrates). Quite often the two versions competed on the charts, so the original was freely available, but even so the UK covers sold well. Listening to the evidence here, Wilde’s tracks at least were fairly tastefully played, well sung and produced (perhaps at times a little too well, bearing in mind the earthy nature of the material).

After a few misfires Marty hit the Top Ten with a decent reading of Jody Reynolds’ death song Endless Sleep and followed it up with dips into Richie Valens’ And Dion And the Belmonts’ songbooks in Donna and A Teenager In Love. One thing that Wilde had in his arsenal that a lot of his contemporaries lacked was a songwriting talent which announced itself with the Bad Boy single, which restored him to the hit parade, getting to number seven in the charts. Previously he had co-written (with Lionel Bart of Oliver! fame) Wild Cat, the b-side of his debut single Honeycomb that gave his backing band their name (both Big Jim Sullivan and Brian Bennett were Wildcats for a time).

The first disc deals with Wilde’s earliest recordings and is pretty enjoyable listening. All the hits mentioned above feature, and Bad Boy/It’s Been Nice was a great record, the moody and original topside being accompanied by a punchy flip. It’s not a plain sailing – there is the odd ill-advised diversion into Paul Anka territory like on the Amapola promo single which was envisaged to launch Marty’s career stateside. He sings well as always but swing wasn’t really his thing. It’s down to personal taste, but I much prefer it when he is given something a little more rough to play with – the sad blues of Misery’s Child and The Fire Of Love are rendered raunchy and entrancing enough to imagine the Cramps recording them and My Baby’s Gone (Stop The World) is aided by some great guitar work.

By the time we reach disc two, Wilde’s chart career was on a downward spiral – he would only return to the Top Ten once more, with a straight cover of Bobby Vee’s Rubber Ball in early 1961. If there is sometimes the feeling that represented here is Wilde’s bid to cross over into the “all-round entertainer” through MOR pop material like Hide And Seek, there are also some goodies, like the Duane Eddy-style guitar power of Jezebel and the bluesy lurch of Lonely Avenue. As the decade wore on Wilde changed tack with his final Columbia single Kiss Me/My, What A Woman. This platter definitely has a beat feel about it and is a decent effort, but I suppose his prior history weighed against him at the time.

To move away from his rock & roll past, he then formed the Wilde Three with wife Joyce Baker and Justin Hayward, later joining the Moody Blues. Although again this outfit met with little success, all four of their single sides were promising folk rock, with the very pretty Just As Long being my personal favourite. Bonus tracks on this one are 21st century live recordings of older material (a good Move It features Marvin, Bennett and Welch of the Shadows and daughters Kim and Roxanne feature on The Price Of Love), and a couple of tracks released in 2017 on the Songs For Your Children And Grandchildren. One of these is I Am An Astronaut, originally cut by his son Ricky Wilde at the age of 11 and it remains charmingly daft.

Although the single sides on the first two discs are good (if not perhaps the definitive versions in a lot of cases), the money shot for this set is disc three’s Radio Luxembourg session from 1959. It’s full of false starts, fluffs and the sound is a little iffy in places (Wilde utters “We’ll get this one right if it kills us” at one point), but crucially manages to capture the pure excitement of 50s rock. The hits like Donna and A Teenager In Love get pleasingly rough workouts and standard Blue Moon Of Kentucky is given a real hum-dinging rockabilly bop feel. Final track Mean Woman Blues even hints at the Beat that was still some way off – this is a great performance and worth the entrance fee in itself.

Also his recordings in the early 70s appended to this disc are great fun. Nudging into the glam area in the vicinity of Alvin Stardust, his All Night Girl has a bit of Troggs in its delivery, great stuff and final 70s A side She’s A Mover packs a solid glam soul punch. His 80s synth efforts aren’t quite as enjoyable, though if you ever wondered what a pub rock version of Suicide would sound like, you’re quids in. That’s a little unfair as he gamely “has a go” with the new technology but in truth his daughter Kim was far better placed to succeed in the 80s and she did with her father’s assistance.

The final disc here is made up from previously unreleased demos from Wilde’s own archive, running from 1960 to 1972. A lot of these have a rough sound quality, some sounded like they have been rollerskated on (1960’s sparse Blues effort Feel the Mood suffers the most), but most are worth hearing. The latter 60s tracks are among the best and most interesting, a quality version of his own Jesamine (which was a hit for the Casuals), the muffled Pop Sike of Elizabeth’s Dream and cool piano Pop of Halfway To Where are some of the highlights. There is even a slight nod towards proto punk on the tough I’m A Mover and his vocals give Steve Marriott a run for his money here too. This disc is a worthwhile delve into the song-smith’s work in progress and shows Wilde was not content to live off past glories.

It almost goes without saying that this boxset is aimed squarely at the fans of Wilde and original rock & roll buffs, but it is fair to say that Marty has had a pretty interesting career that delved into areas other early UK rockers didn’t, and moved with the times a little more. Where A Lifetime In Music falls down is through not including his most well-known song after the early 60s Abergavenny or anything from his late 60s Diversions album, which has become a bit of a cult item. Aside from that, the two singles discs are pretty good listening, with the Radio Luxembourg session on disc 3 stealing the show along with those nutty but loveable early 70s recordings. As we have seen, the final demos disc has a few rough and ready gems too.

All of this add up to a Wilde (sorry) old time for the rock & rollers among us. Marty Wilde provided some of the key moments of excitement in 50s British rock, possessing as good a voice as any other UK rock & roll contender and with a cool band in the Wildcats backing him. He also had a strong song-writing talent which would see him through the lean years and that has kept him performing in the present day, now in his 80th year and about to set out on tour. They don’t make them like Marty Wilde anymore and you can hear why on A Lifetime In Music.