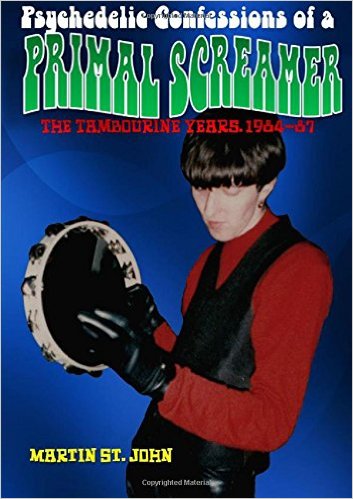 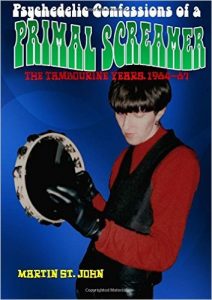 The Psychedelic Confessions of a Primal Screamer

Part one of John “Joogs” Martin’s memoirs covering his time with Primal Scream and the nascent Glasgow indie scene in all of its acid-soaked glory. Joe Whyte reviews.

I interviewed John “Joogs” Martin for a piece on his upcoming book last year. Following its appearance on Louder Than War, the website was contacted by representatives of Primal Scream’s management to respectfully request that it was removed before legal proceedings were initiated. To be fair, the interview was helluva incendiary in parts as I’d basically given Joogs free-reign to vent and some of the material (which he’d had pent up for 27-odd years) was pretty vitriolic and at times verging on libelous. It was also very, very funny.

At that point, Joogs (his nom de guerre was flipped by himself to Martin St. John during the PS early days) was looking for publishing for the book that he’d laboured over in his night shift job for several years. He’d actually hand-written it and part of the problem was finding someone to transcribe it all before it was touted around. Long story short, Joogs eventually found an independent publisher in Lulu Books and its, at long last, available to buy.

Joogs is one of those guys that everyone in the post-punk and indie scene in Glasgow knew; rail-thin, bug-eyed, leather-clad, endlessly enthusiastic and talking ten-to-the-dozen, his (seemingly) permanently wired presence was once met, never forgotten. The other striking thing about Joogs was always his sheer love and fanaticism for music; be it his early days in the dangerous Glasgow punk scene, his brief sojourn as a rude boy and his evolution into the Glaswegian guru of garage rock. The discovery of the whole mid-late 60’s garage-trash scene was something of a eureka moment for Joogs; he’d always been a real devotee of The Cramps but discovering the Sunset Strip, drug-drenched sounds of The 13th Floor Elevators, The Standells, The Chocolate Watchband,The Seeds and all of those one-single-and-gone bands from Lenny Kaye’s “Nuggets” collection was the real deal. 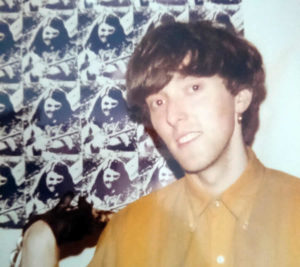 Around this time (early ’82-ish) he met Bobby Gillespie through mutual friends and ended up as tambourine basher, vibes controller and visual focal point of the nascent Primal Scream. Sharing a love of all things garage, they were a formidable duo in the budding bands evolution from New Order influenced no-hopers to a psych-influenced jangle-pop band that birthed a thousand anoraked imitators. The other striking development around this time was the legendary Splash 1 club nights at Daddy Warbucks (a fading, slightly grubby discotheque) which despite being on a Sunday night, regularly pulled 500-odd (and some of them were VERY odd, indeed!) people to see bands such as The Loft, The Jasmine Minks, Wire and Sonic Youth. The between- bands “soundtrack” was also something else; no DJ, just pre-made cassettes of weird-out, psych-out, punkified sounds that  were as eclectic as they were inspiring.

The book is, for the most part, centred around Joogs joining The Scream Team, the internal machinations in the early days and the sheer jubilance and delight during the formative years of the bands founding and them finding their sound. The characters that flit in and out of the story will be familiar to many Glaswegians; often referred to by nickname (and often by Joogs’s pet-names for people) it could be baffling at times for the non-initiated although the narrative arc of the bands rise, allied to the writers social/romantic life are illustrated by the music. Always the music. That crazy, mad, always-something-to-discover treasure trove of crate digging at record fairs, swapping tapes with like-minded psych-heads and that wonderment at the discovery of something new. That’s at the heart of this tale and it would take a hard-headed cynic not to be carried along with Joog’s enthusiasm and sheer joie de vivre about the sounds that so moved him.  Think an indie-psych High Fidelity with added drugs and poverty and you’ll get the broad idea.

At its core, the book charts the development of Glasgow’s (and the U.K.’s) indie music scene before that became a catch-all for any major label guitar band of the last 20 years. This was the true DIY spirit; touring bands sleeping on peoples floors, vans on endless motorways full of hungover, malodorous specimens, fanzines and club nights and a real community ethic of bands and promoters working together. The tales are familiar if the characters often aren’t although soon-to-be famous folk like Thurston Moore pop up regularly. Some of Joog’s encounters with his heroes and zeroes are priceless; giving Lloyd Cole the cold shoulder and being speechless in front of Arthur Lee are just two of the tales that had this reader grinning broadly.

Of course, Joogs was soon ousted from Primal Scream (along with several other originals) and the creeping bad atmosphere and politicking is beautifully illustrated in his inimitable style. The book is written in a style that those who know, and have ever spoken to, the author will recognise; it’s a hellzapoppin’, Glasgow dialect-meets-Clockwork Orange Nadsat mash-up with lots of nods to lyrics and movie titles from his vast (and I mean vast) collection and, probably not unlike Trainspotting, it’ll take the uninitiated a wee while to tune in completely. That said, it’s a lightning-paced trip through the memories and ephemera of an obsessive collector; his diaries from the time acted as an aide memoire given some of the LSD-fueled carnage that takes place in the pages.

If you fancy an insight into Primal Scream’s formation and their pre-Screamadelica days, as well as a front-and-centre view of Creation Records and the 80’s indie scene, this is unmissable. Buy it, psych-cats and enjoy the wild trip.