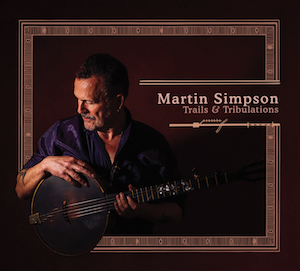 Martin Simpson’s twentieth solo album in a forty year span captures a set of ruminations and reflections on “nature, travel and real life stories.” It finds him taking close notes while observing the minutiae  of the world as he passes by to capture  the itinerant musician’s lifestyle. All accompanied by his trademark spellbinding guitar style.

A guitar style that has become his stamp, the  Simpson signature – the archetypal same picture in a different frame but what the old bootleg label used to call the TMOQ – the trademark of quality. He’s also talked of “different instruments, different sounds alongside old friends and new friends”; old friends that include Nancy Kerr, Ben Nicholls and Andy Cutting while new friend John Smith makes a splendid addition with some subtle  electric guitar.  Add the female backing vocals of Amy Newhouse-Smith and daughter Molly and aside from MS himself, it adds to quite a rich palette.

Whether it be traditional English, original songs or songs of American or elsewhere origin, they arrive Simpsonised, courtesy of the sympathetic skills of Andy Bell in the control booth. From the sweeping lushness and fuller arrangement of  Blues Run The Game (the trail beginning with “catch a boat to England, maybe to Spain”) he’s quickly into more sparse banjo mode on a haunting Bones And Feathers. An intelligently sequenced and stunning pairing that  that kick start a journey along a path exploring typically Simpsonian American influenced  folk music although there are moments that evoke a quintessentially English pastoral insight. The stark bluesy slide on St James Hospital contrasts with an emerging swell of strings on Jasper’s/Dancing Shoes and then into the ringing steel strings combined with the Cutting melodeon on Ridgeway,  soothing and mellow.

His experience from the Elizabethan Sessions can be held as possibly inspiring A Ballad For Katherine Of Aragon which aside from the title, musically conjures a stately Tudor baroqueness alongside a contemporary lyric.  Ending  as it began,  the full band feel on Rufford Park  Poachers gives way to a masterful solo Simpson take on the well travelled Reynardine.  It prompts the thought that Trails… is an album deserving of a karaoke version where the vocals are omitted to appreciate the virtuosity and wallow in the range of instruments and the evolution of Martin Simpson the musician. One built round a sense of feel and space without showy overplaying and an understanding of when not to play. It may be old hat but the Lord Of The Strings title might be no more than an apt accolade for  the masterful Martin Simpson

You can see Martin  wearing a splendid shirt and talking about the album here:

He is  also on Facebook , and tweets as @msimpsonian